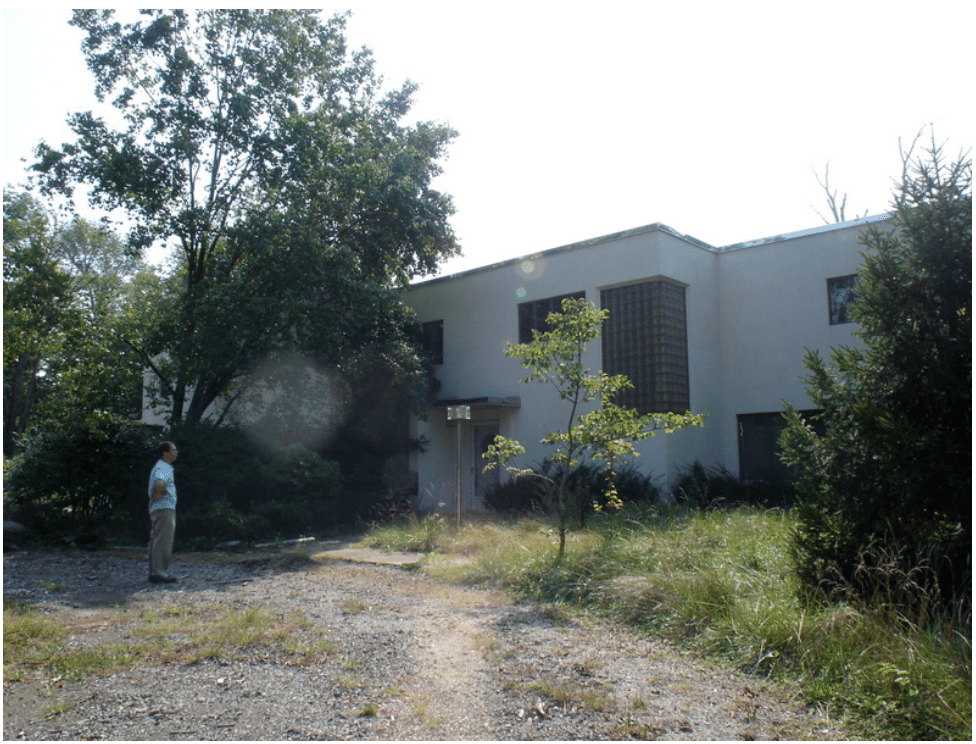 In the summer of 2005, I got a desperate call from an elderly sounding woman from St. Louis who identified herself as Emily Pulitzer.  She told me that she heard her childhood home in Woodlawn had just been sold to a developer and she was not sure if it was still standing, but could I please see if it was and possibly try to save it from destruction?  She saw my name in Dwell Magazine, listed as Cincinnati’s Modern Realtor, and she knew I would understand.  You see, this house was one of the first modern houses built in Cincinnati.  It was designed by John Becker in 1938 and built for Emily’s parents, Harriet and Frederick Rauh.

What was she talking about?  How could I not know of this house?  A modern house in Woodlawn?  All those Nancy Drew books I read as a child had prepared me for the sleuthing that lay ahead….I immediately started my investigation.  The good news was that the house was still there – yes, a developer had bought the house and the entire 8.75 acre parcel had been platted to maximize the land.  The incredible 4466 sq. ft. international style modern home was simply in the way of this guys get rich quick scheme of selling 6 one acre lots for $190,000 each.

So sure was he that his $750,000 investment in the house and land would pay back big time that he even let someone come on the property and deforest the trees.  By the time Arlen and I found the house and went trespassing for a look in September 2005, the entire area looked like it had been attacked by giant beavers.  There were wood chips everywhere.  But in the midst of all the destruction was a modern beacon capped with a gleaming strip of stainless steel.  The house was beautiful!

We were so excited!  Surely we could talk the owner into preserving the house and developing around it?  And why didn’t anyone know about this place?  I called my friend Margo Warminski at Cincinnati Preservation Association.  She did not know about the house.  The state preservation folks did not know about it either.  Margo immediately put out a preservation SOS to raise awareness to this fantastic example of early modernism in Cincinnati.  John Becker’s own house in Anderson had already met an unfortunate fate when his family sold it for development.  What a wonderful opportunity to be able to save this one!

The owner, however, did not share our vision or our passion for what he had. I tried pleading with his agent (who had the lots listed) to let me show the house and find a buyer who would preserve it.  The owner refused to let the agent show the house since some sort of ‘preservation’ movement would really interfere with his plan!

So the years passed.  Margo did not give up, but she did not have much success, either.  The market dropped and the owner’s dream of selling 1 acre lots in Woodlawn for $190,000 evaporated (although a couple of the lots are still on the market!).  The house, abandoned and uncared for, fell into decay.  Cincinnati Magazine ran a story about the house in September 2009 .  Then a couple of weeks ago, I saw a foreclosure listing pop up on Leacrest.  Could it be??  It was!  Somehow, the house and 2.5 of the original 8.75 acres ended up back in the hands of the bank and was now on the market for $149,000 (it has since been reduced to $119,900)!!  So Arlen and I headed back out to take a look.  Could this gem be saved at long last?

NOTHING could have prepared us for what we found.  To say the house was stripped was an understatement.  It was devastated!  Everything was torn out of the house and it was open to the elements.  Someone ripped out both stairways, the entire kitchen, the bathrooms……paint was peeling everywhere, the ceilings were crumbling.  The carpet was still in place in the living room.  The stench was indescribable.  In spite of all that, the actual structure seemed sound, most of the windows (which had been replaced with nice quality wood casements) were pretty decent and unbelievably, the curved plaster walls were in pretty good shape (they don’t build them like that any more!).  Some of the original art moderne light fixtures, imbedded in the stucco exterior, are still intact, and are beautiful.

Can the house be saved?  Sure, with unlimited funds.  I can’t even imagine what it would cost to make this house livable, but I’m sure it could be done.   But it would be a lot easier to hop in the DeLorean, fire up the flux capcitor, and stop the guy from buying the house in the first place.

So here is my last plea for the Rauh house – if anyone out there has really deep pockets and wants to be a hero to all modern and architecture fans, I know a fixer upper I can sell you.  It’s a real ‘handyman special!’ 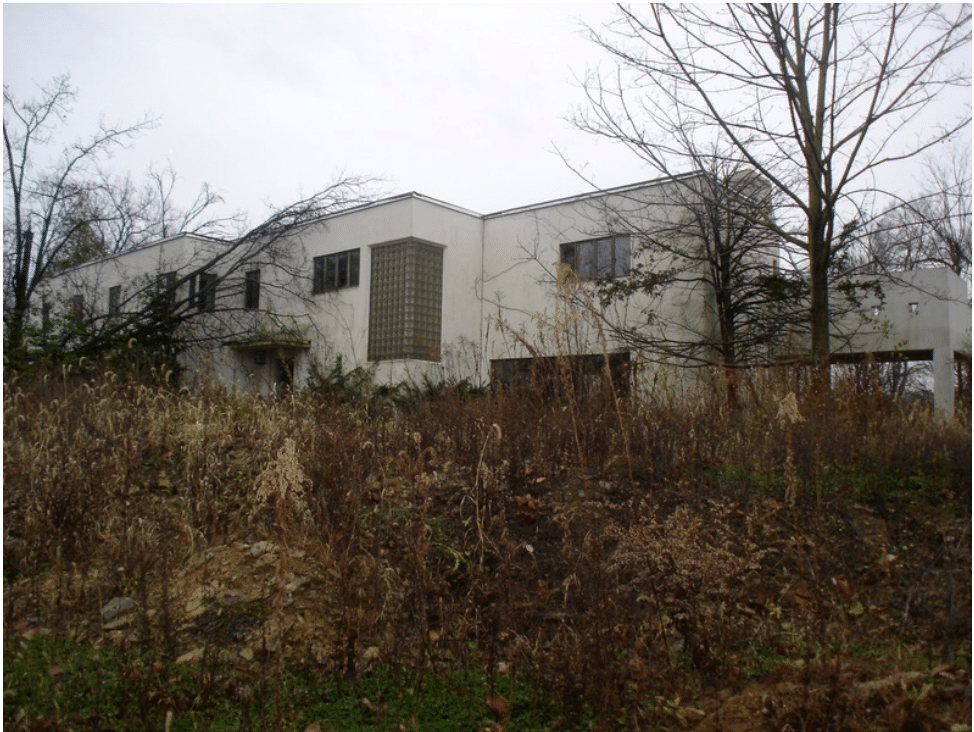 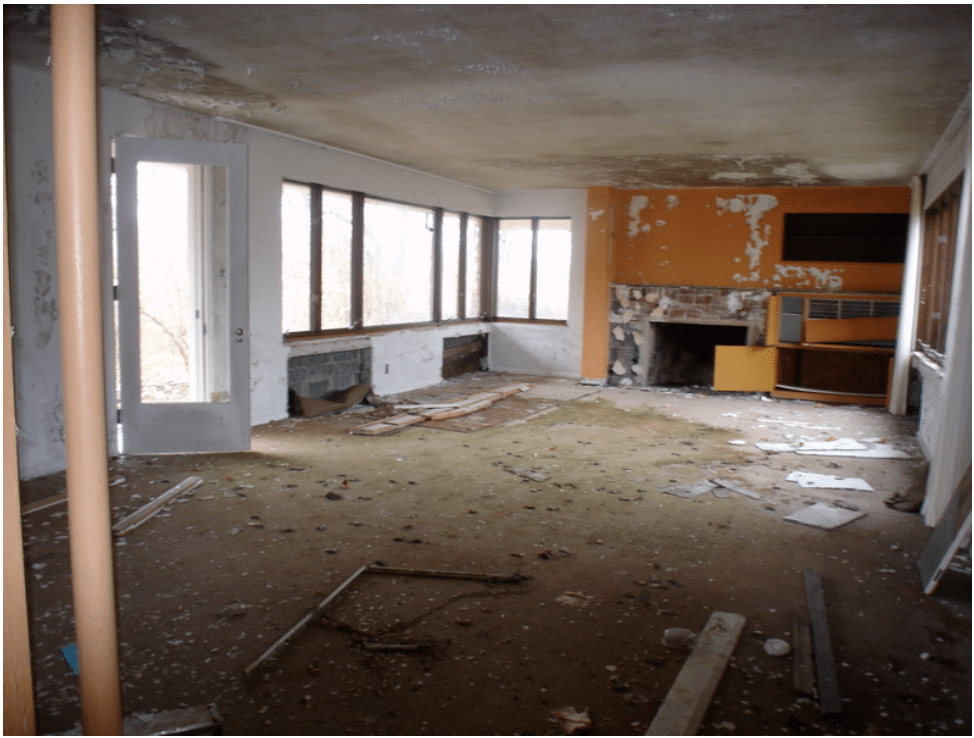 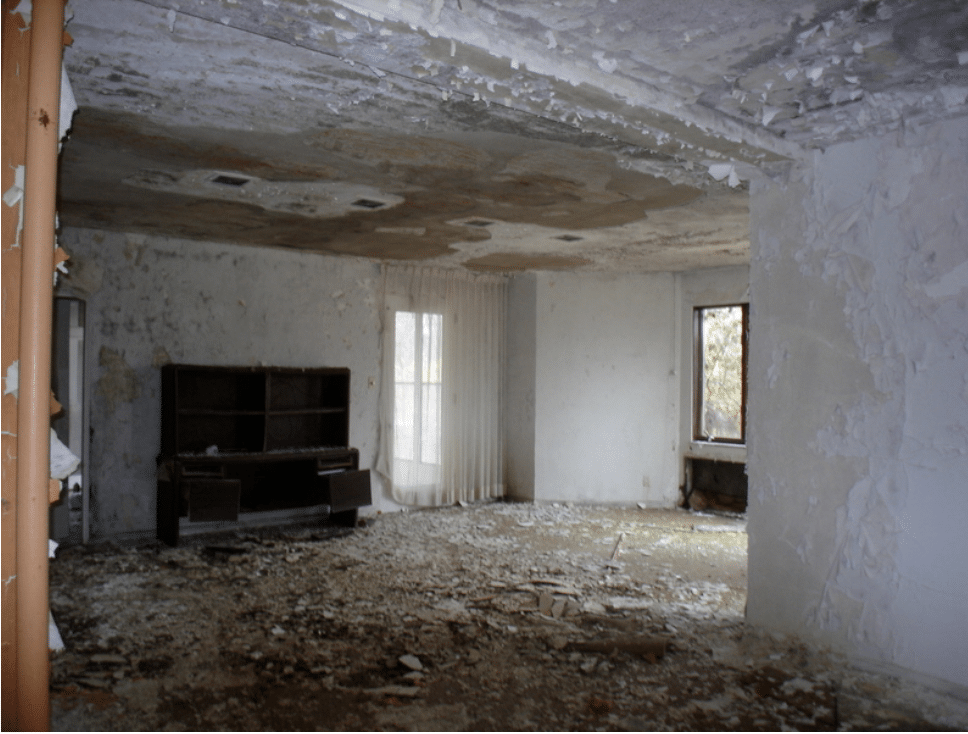 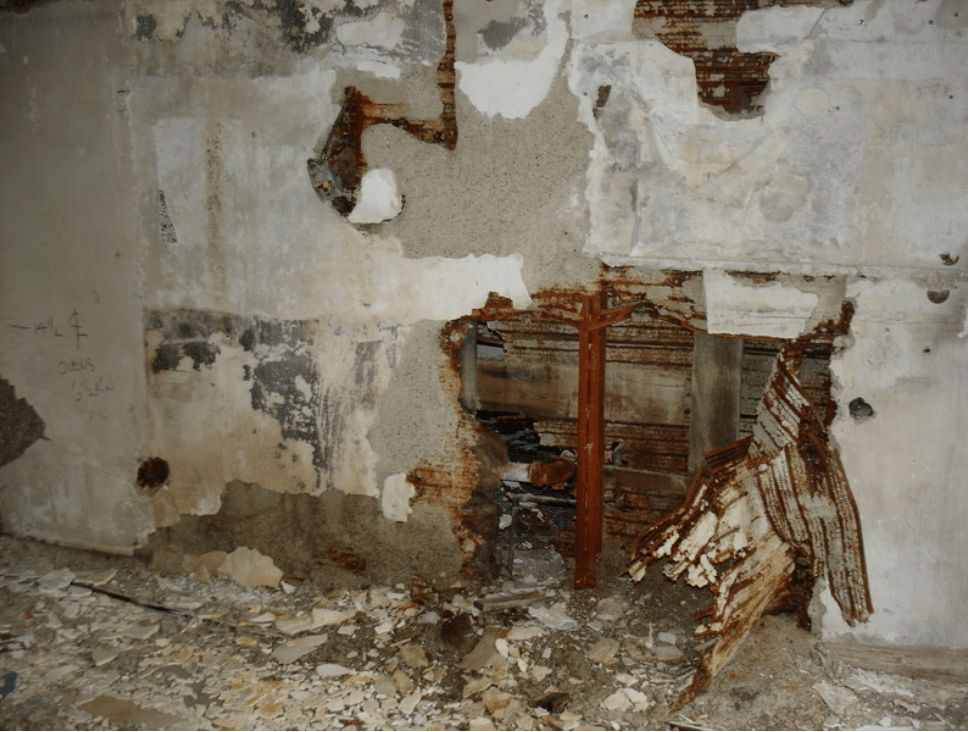 Cry no more!  The home is actually being painstakingly restored, thanks to Emily Pulitzer, the daughter of the original owners.  Check out the news story here.

And if you would be interested in purchasing the magnificent restored modern landmark, let us know!

Below are the mls listings from 2004 when the ‘developer’ bought the house, and from 2010 when it sold in foreclosure

← the MODERN blogs the corbett house →