We’ve all heard of California builder Joseph Eichler and his California Ranches with walls of glass & courtyards –  mostly modest homes in sought after California neighborhoods that have surged in popularity in recent years and now sell in the millions.  But what about Toledoan Donald J. Scholz?  No, this is not more of my hometown pride showing.  But Scholz did have a lasting impact on me growing up in Toledo, and on many others in Cincinnati and other parts of the Midwest, yet most people probably don’t even know it. 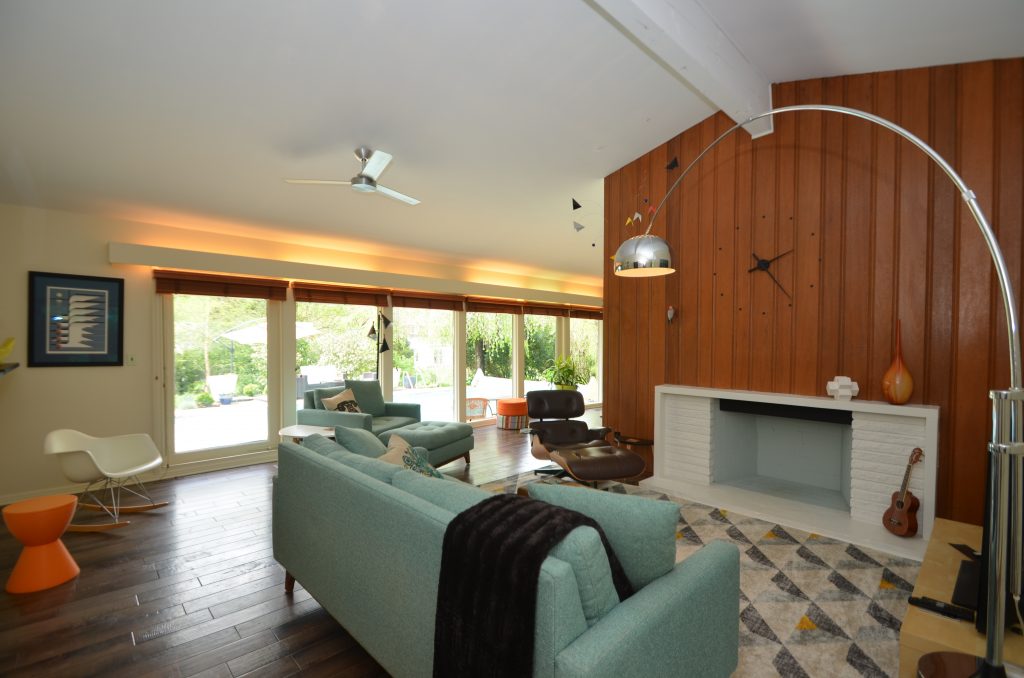 For 16 years, cincinnatimodern has dealt with Midcentury Moderns of all shapes and sizes, and they fall into loose categories with crossover & combinations:  Organic ‘Wright inspired Modern;’ International Style; Bauhaus inspired; post & beam.  We often look at these homes and can instantly recognize a trademark detail from one of our signature local architects and know exactly who designed it and when.

But there have always been those mystery homes that have wonderful midcentury bones and features, like cathedral ceilings and walls of windows, often hidden behind more traditional facades from the front, and walls of glass to the back or side.  We always thought of them as ‘Eichler-esque’ and we weren’t too far off. 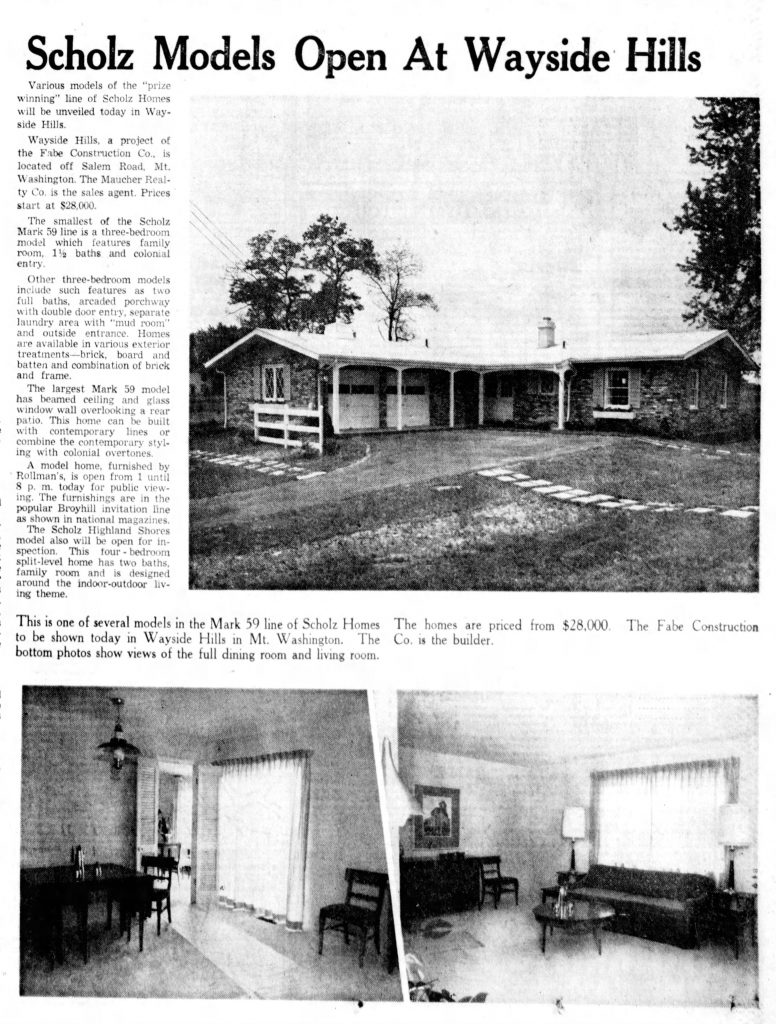 Many of these well designed homes, from Western Hills to Colerain to Groesbeck to Mt. Washington were the brainchild of Toledo builder Don Scholz.  Scholz, originally from near Cleveland, OH, had the idea in the early 1950’s to bring California style contemporaries to Toledo and adapt them to the Midwest climate with advances like insulated glass and central air conditioning.  Until then, most postwar developments had been tiny homes built on little postage stamp lots.  Scholz idea was to spread out, and build an open larger footprint ranch with prefabricated elements to keep construction costs down.  He started in Toledo, then started branching out and before long, through a network of sales reps and franchisees, Scholz homes were being built across the Midwest and even in the South.  He was named by Builder Magazine as one of 20th century’s 100 most influential figures in residential building.

But like many visionaries, his path to get there was not easy and not direct.  He started Scholz Homes Inc. in 1946.  He sold it to Inland Steel in 1970, and started another land development company that went bankrupt before eventually relocating to the Phoenix, AZ area as a developer of luxury homes.  He died in 1999 at age 80. 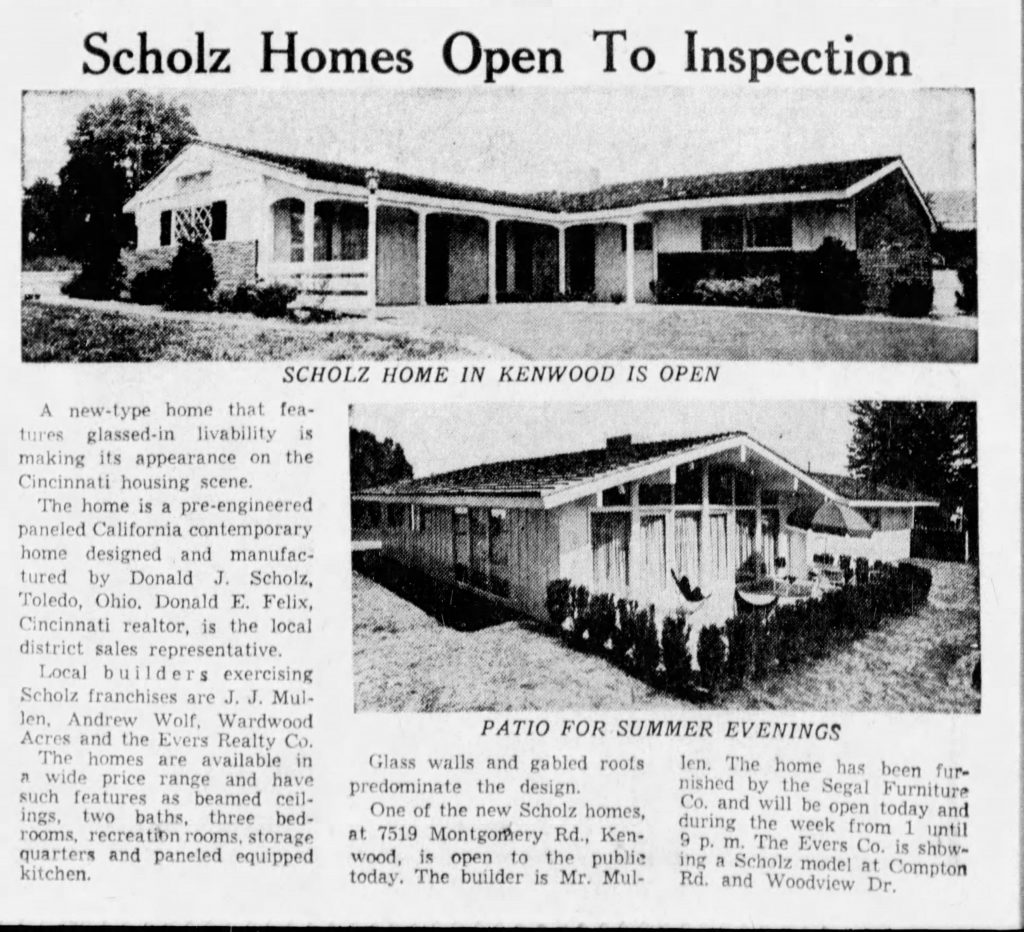 A quick trip back in time via newspapers.com lead me to countless ads in the Cincinnati Enquirer for Cincinnati builders and contractors from 1954 into the 1970’s proudly building Scholz designed homes, many made in prefabricated sections and combined in different configurations. There was even an office in downtown Cincinnati where you could pick your Scholz home, features, finishes and builder.  Our newest listing at 7509 Miami Ave in Madeira is a Scholz Home, as is a house on Forest View Lane that we sold years ago in Western Hills.  We also unknowingly sold a couple of Scholz homes in the Wardwood neighborhood in Colerain off of Compton Rd.  Thinking back, I wonder how many others? 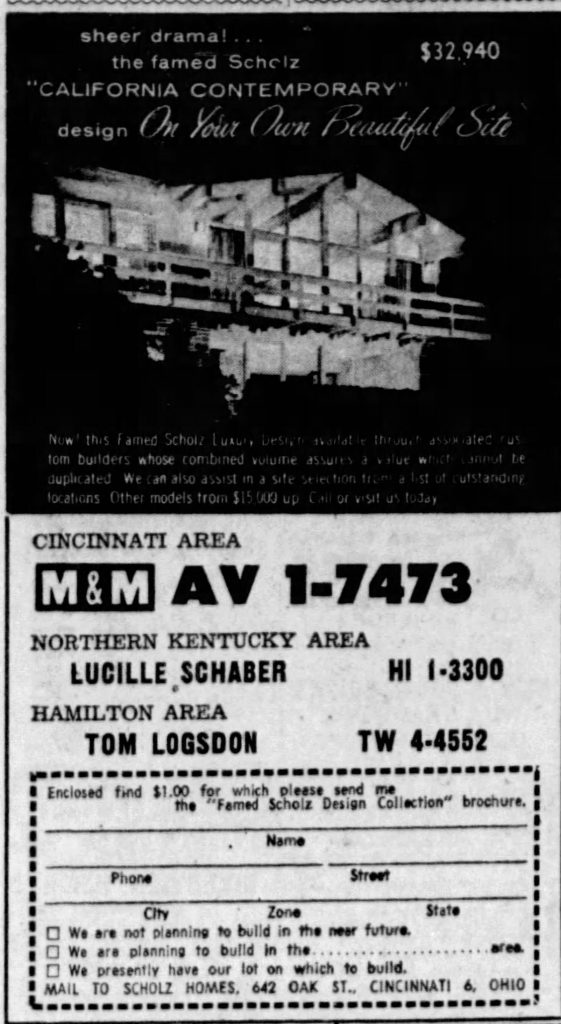 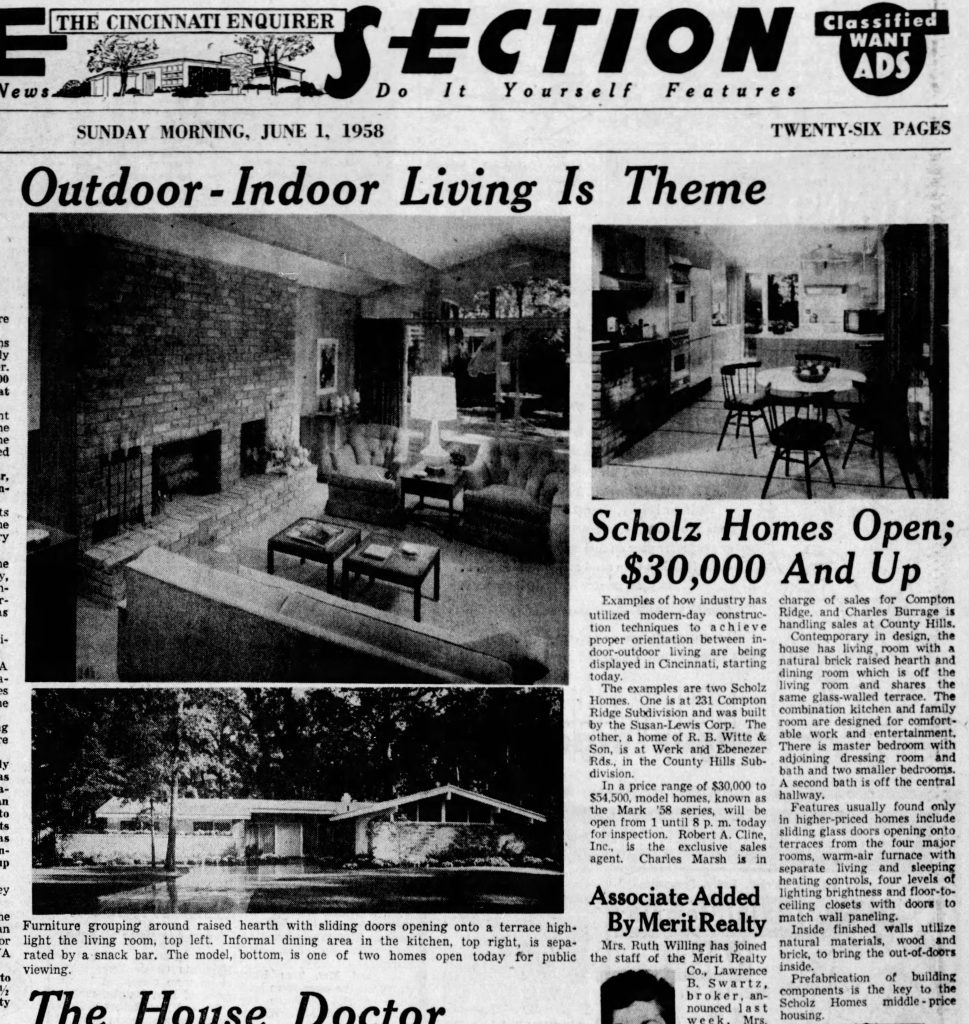 The house in Madeira, built in 1954, shows very well how these homes have stood the test of time, and how a little reconfiguring and updating makes an incredibly efficient home for the way we live today. 7509 Miami Avenue is currently in *coming soon* status with no showings until 5/2, and is OPEN this SUNDAY May 5, 2019 noon – 1:00.  Come take a trip back in time to see this groundbreaking and forward thinking design from a man who built his career on selling the American dream. 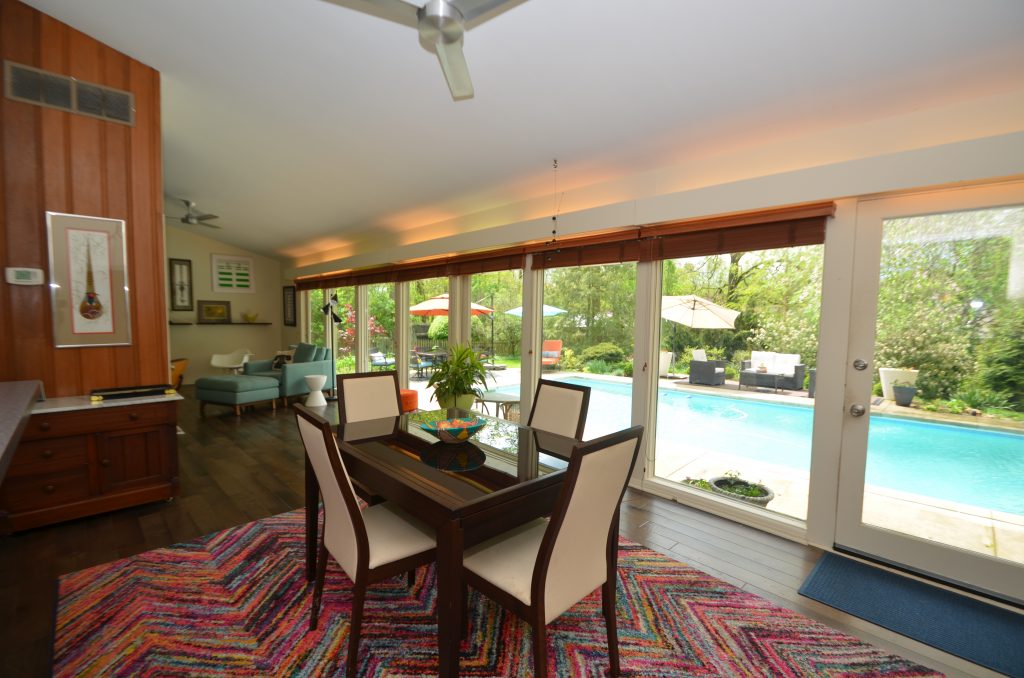 the dining room with Scholz trademark wall of windows at 7509 Miami Ave in Madeira, currently on the market 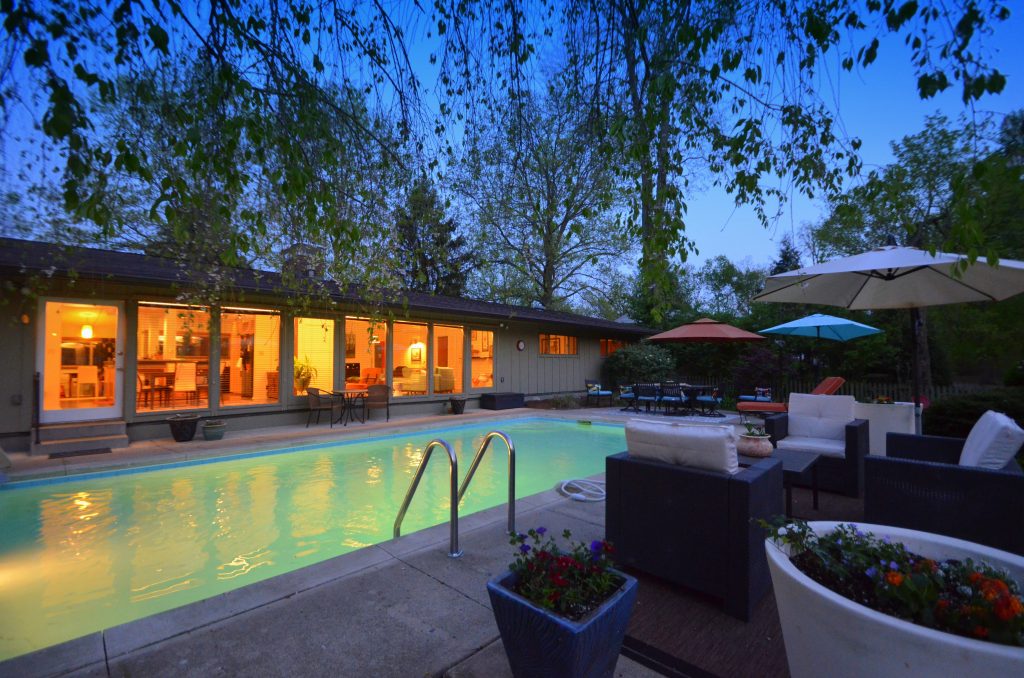 7509 Miami Ave in Madeira – from the outside looking in.

Here’s a fantastic follow up to our blog post about Scholz homes. One of those ‘now you know the rest of the story’ kind of tie ins. And a little fun factoid. I got to go to a Boston concert when I was in high school because a hometown boy was in the band. As I recall, it was one of the first concerts at the then new Centennial Hall at the University of Toledo. Link to original post in comments. And obviously I’ll never tell you ‘don’t look back!’