giving thanks to columbus

As I think of all I am thankful for this week, all of the usual things come to mind.  But I would like to add one more thing to be thankful for this week: all of the people who have invited me into their wonderful modern homes over the years.  I truly have the best job ever!  Here are some photos from our bloggers tour of  Columbus, Indiana and the private homes that were graciously opened to us by their owners.  Although these homes are not part of the standard Columbus architecture tours, you can see that the folks of Columbus ‘get it.’   I share the ‘eye candy’ as my gift to you: 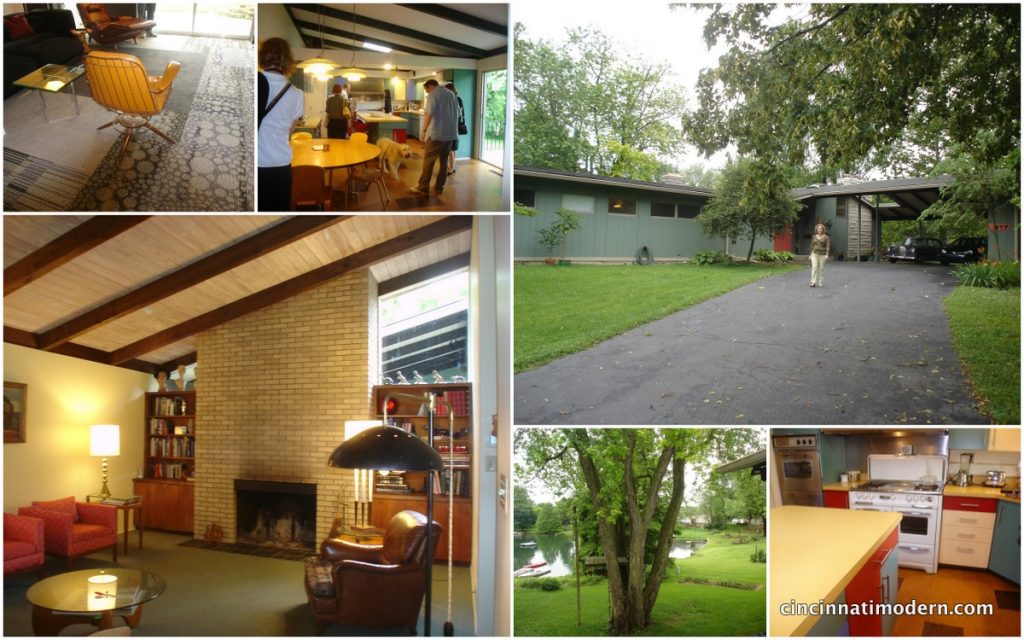 1955 Home in “The Lagoons” – a wonderful neighborhood surrounding a small lake. Many of the homes in this neighborhood have an ‘Eichler-esque’ look and feel. The current owner of this home is an architect who co-wrote the National Landmarks applications for Columbus. This home was designed by “Columbus Custom Homes” (contractor Ted Meier) and underwent a major reonvation in 1966. 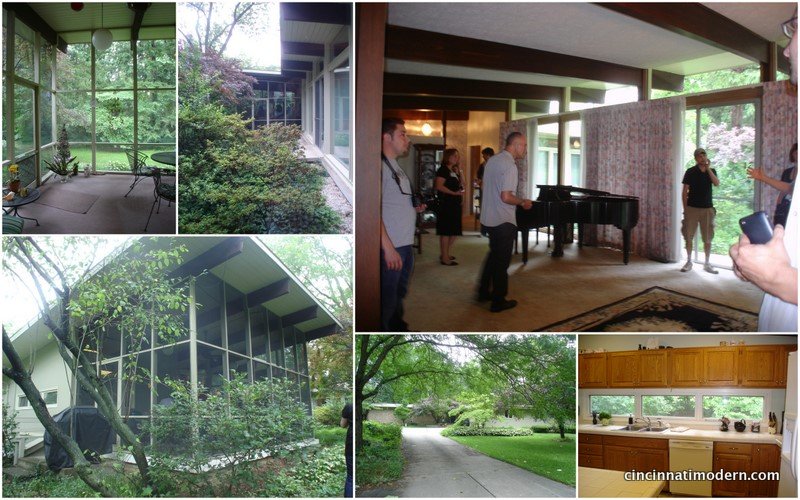 This early 1960’s post and beam home is owned by a couple who retired to Columbus from Chicago. It was also believed to be built/designed by Ted Meier. 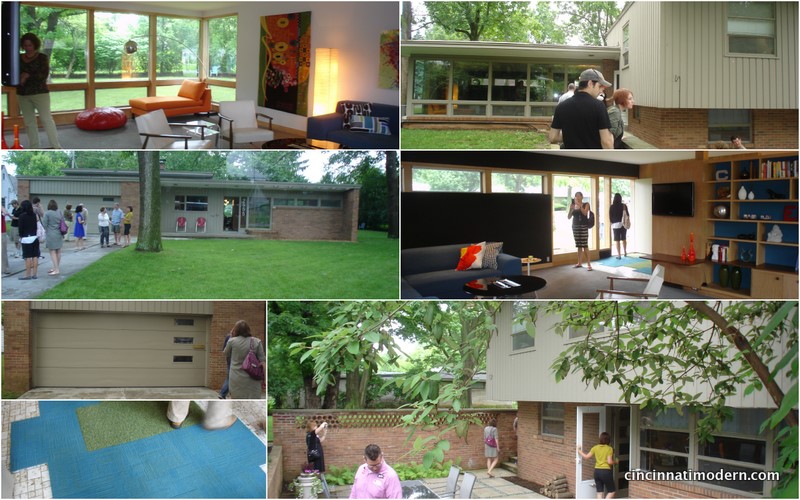 This very cool 1952 home looks like a small ranch from the front, but opens into a split level in the back. The original designer/builder, Dean Taylor, lives right next door in a rather traditional home. The current owners of this house have a great modern aesthetic going on! 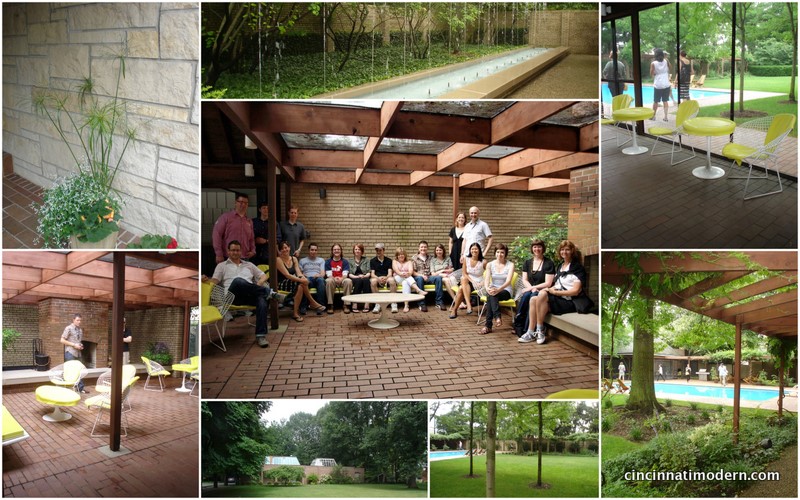 Next we did a walk-thrugh of the Hamilton House garden designed by the great landscape architect Dan Kiley. The house was designed in 1949 by Indianapolis architect Maurice Thornton. The gardens were designed between 1963 & 1974. The photo in the center is of the largest collection ever (?) of modern architecture bloggers all in one place! 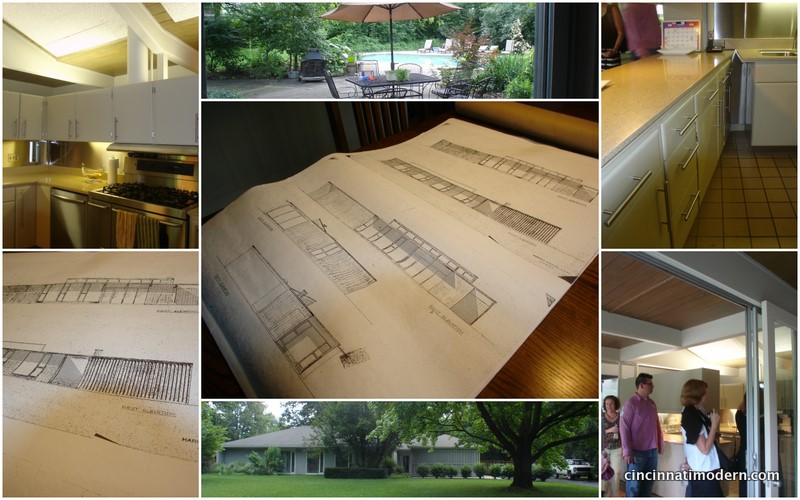 This 1953 Harry Weese designed home almost broke my heart. Known as the Lauther house, it is published in Harry Weese Houses by Kitty Baldwin Weese. The original flat roof with a clerestory bump-up was sacrificed (in favor of dry ceilings, I suppose) and a hip roof installed. The original blueprints show what it was. Sniff! A very unique design feature of this home is the entire kitchen peninsula of cabinets is on a huge hinge and can swing open. Why? I don’t know. But how cool! 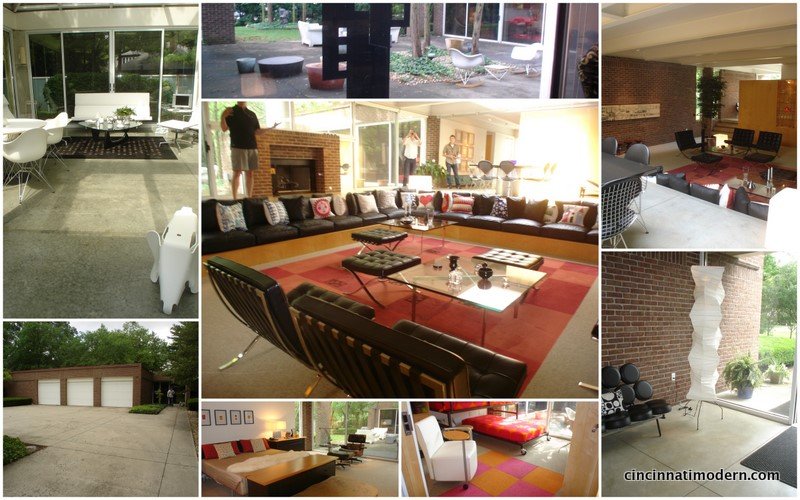 To spice things up a bit, they took us through this newer (1995) modern home designed by homeowner and architect David Force. As an homage to the nearby Miller House (blog post to come later about that one!!), located on the same street, this home features a very large ‘conversatio pit’ complete with Alexander Girard textiles. This home was impeccably furnished with ‘new’ vintage modern designs. Interestingly, our tour bus had driven by this home several times during the weeend before the home tour and we all (being the modern fanatics we are) oogled this house every time we drove by. Alas, we were not disappointed

Special thanks to Cindy Frey and Lynn Lucas of the Columbus Area Visitors Center, and Barrett Crites (Baz) of Atomic Indy, for educating us on their horn of plenty, so that we could spread the good word to others!

Happy Thanksgiving from the Rissovers

← notes to self the artistry of richard t. calef →