in the beginning, part 2

The Story Behind Mid-Century Modern Style

Do you know where the term "mid-century modern" came from?

Our daughter, Tenley, recently sent a link to this video (above) with the note: “did you know this?”  Yeah, we knew that.  We bought The Book in 1985 and it kind of set the course of our life.  But let me back up a bit……

Our adventures in beautifying the fraternity house (see in the beginning, part 1) energized us to try other projects.  In 1982 while a student at UC, I rented a studio apartment in a cool 1966 MCM building in University Hts.  The “Mary Richards” in me was so excited!  And like Mary’s apartment, putting a bed in the one room space just didn’t seem right.  It needed a platform, I decided, that could double as a bed and a seating area.   It was the 80’s after all.  But how were two broke college students with NO construction experience going to make that happen?  My memory is kind of fuzzy on the how and why, but we ended up at an industrial building in Norwood – the old US Shoe warehouse – that was being emptied because US Shoe had just built a new state of the art facility right off of I-71 N of Ridge (Now 5/3).  We bought a GIANT old wood bookcase, and hauled it back to the apartment in Arlen’s 1974 Dodge station wagon, did some tinkering to make it fit, covered it in a carpet remnant – and voila!! 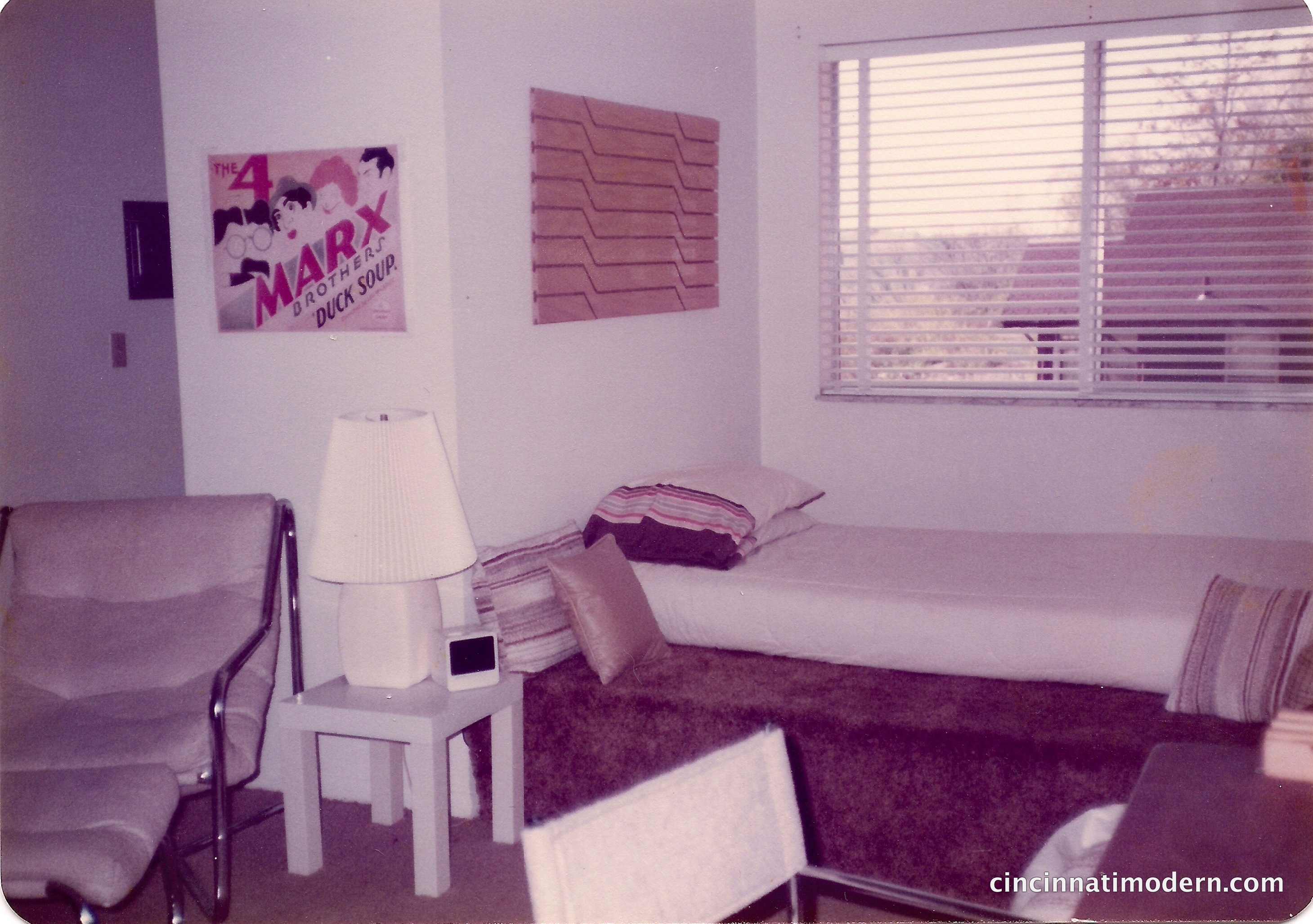 the platform (bed/couch) made from an old bookcase in my first apartment. the wall hanging over the bed was part of a slatted wall display at US Shoe. 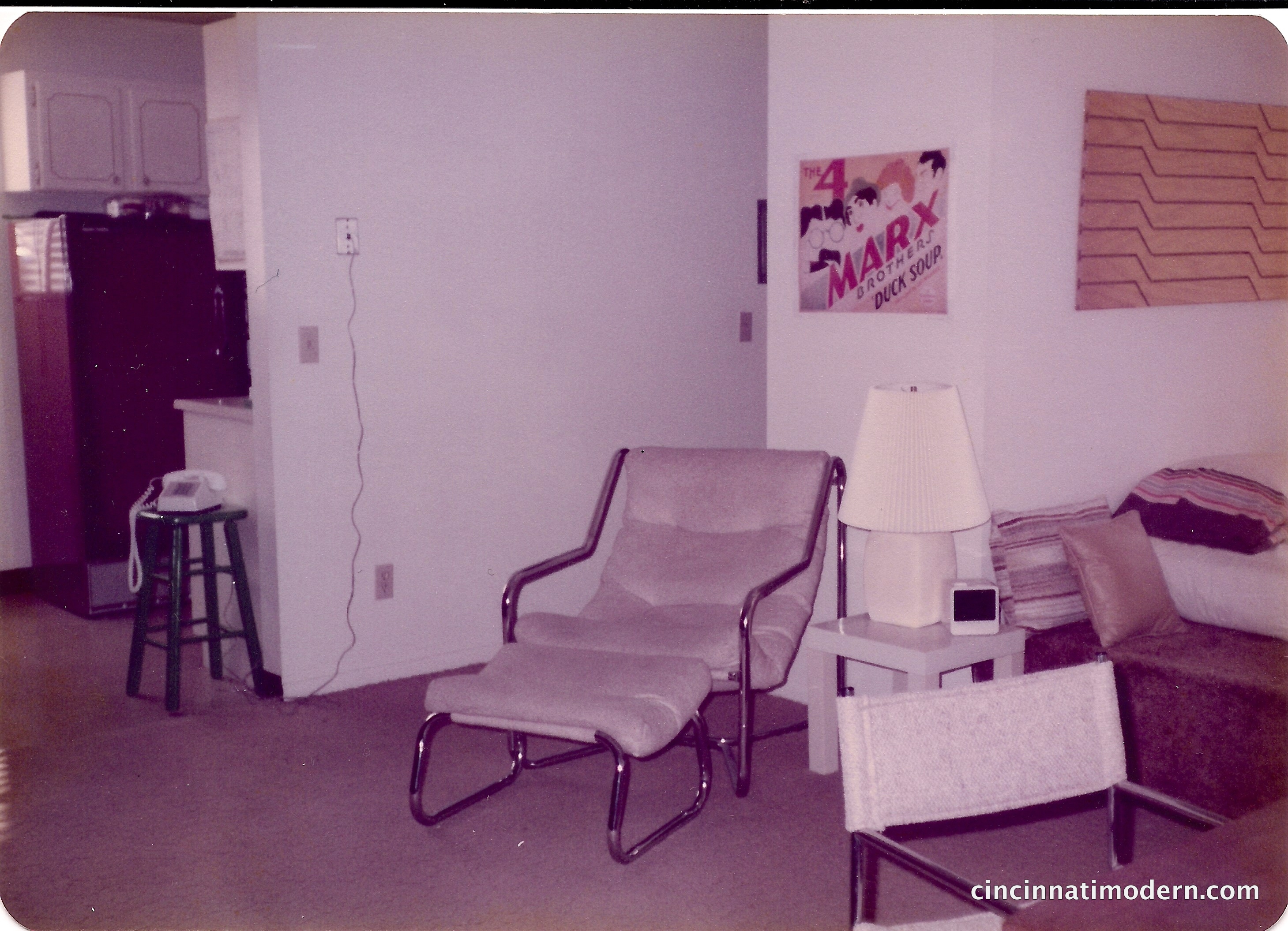 one room living in my first apartment! ALL of the furnishings were purchased used for a total of about $200 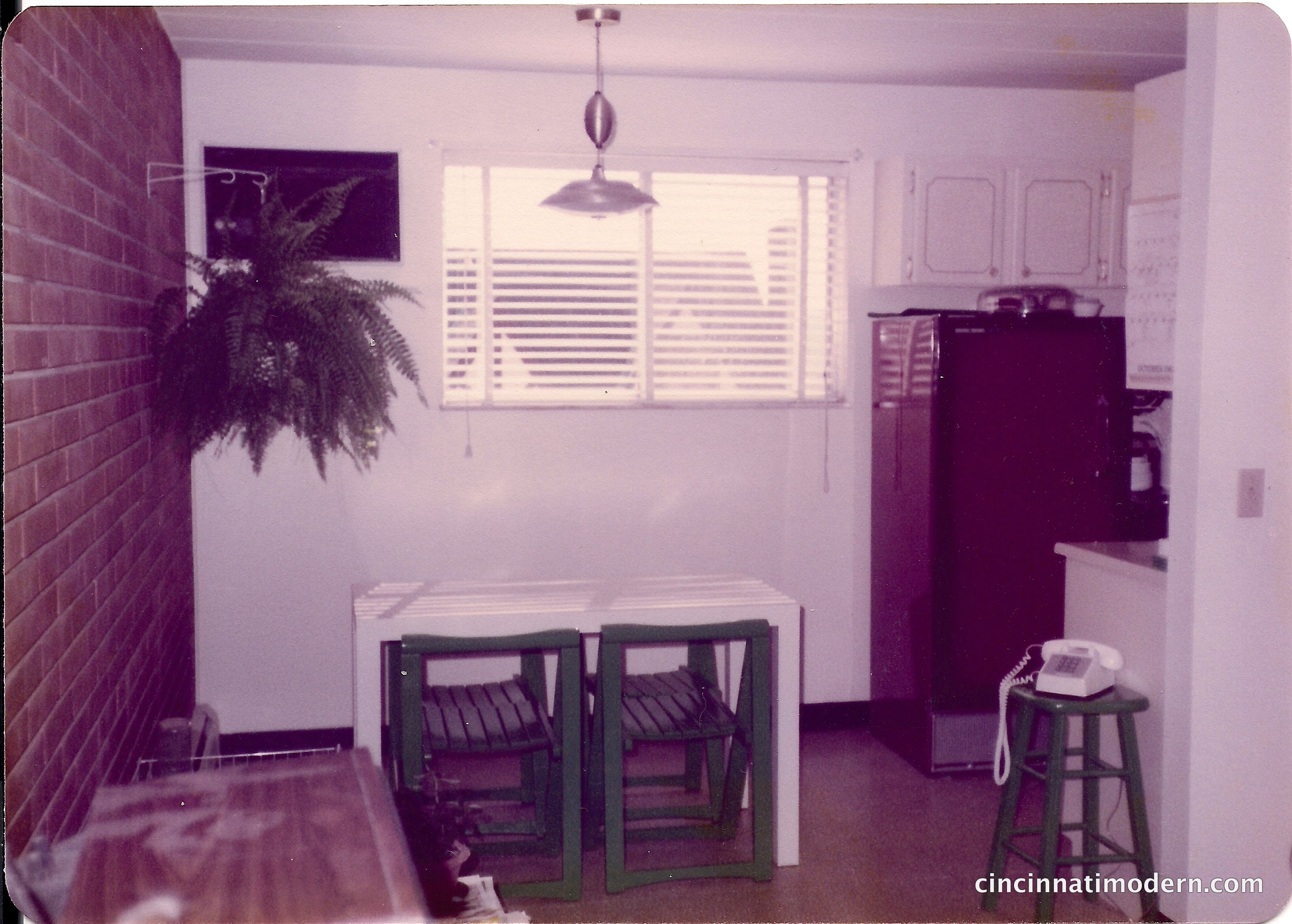 we still have these well designed and handy folding chairs. yes, i painted them green! 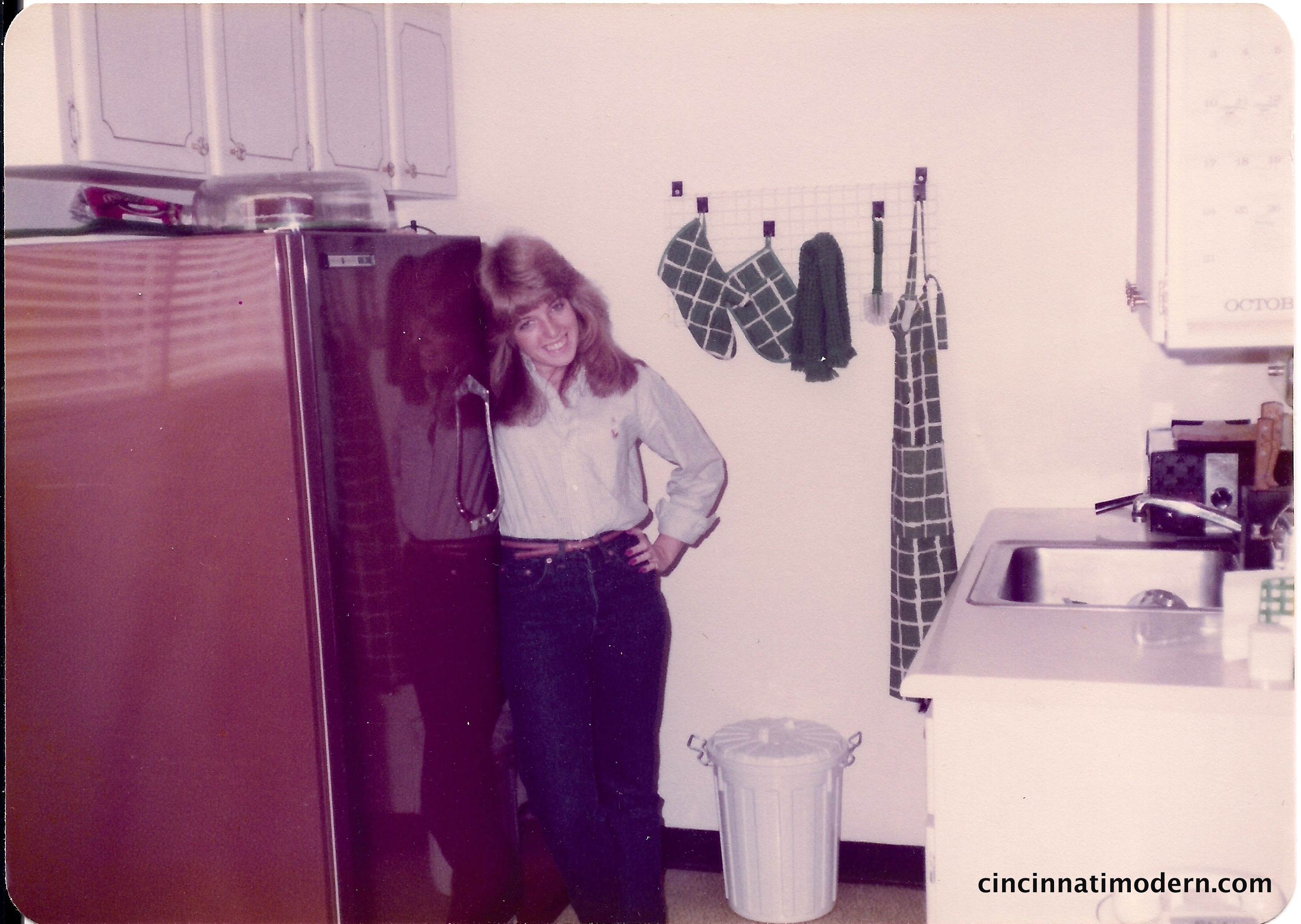 me in my very first kitchen. still had the original copper fridge from 1966. no comments on the feathered hair….

In 2010 that same building was for sale and we walked through it.  The carpet platform/bookcase was still there in Apartment 4!  I guess we had skills after all!

Our next move took us to OTR (see back to the future….) where we lived when we got engaged and married in 1985.  Our weekends for the next year were spent driving around town, looking for what we called at the time “50’s Modern Houses” because, well, I was obsessed with the style and there were no other words for them.  Our wedding registry was at Jasobson’s in Toledo (will forever miss this wonderful store) and when an over abundance of bread and butter plates necessitated an exchange,  this book in the Jacobson’s book department jumped out at me……..it was as if the angels were singing.  That’s it!  My style finally had a name!! 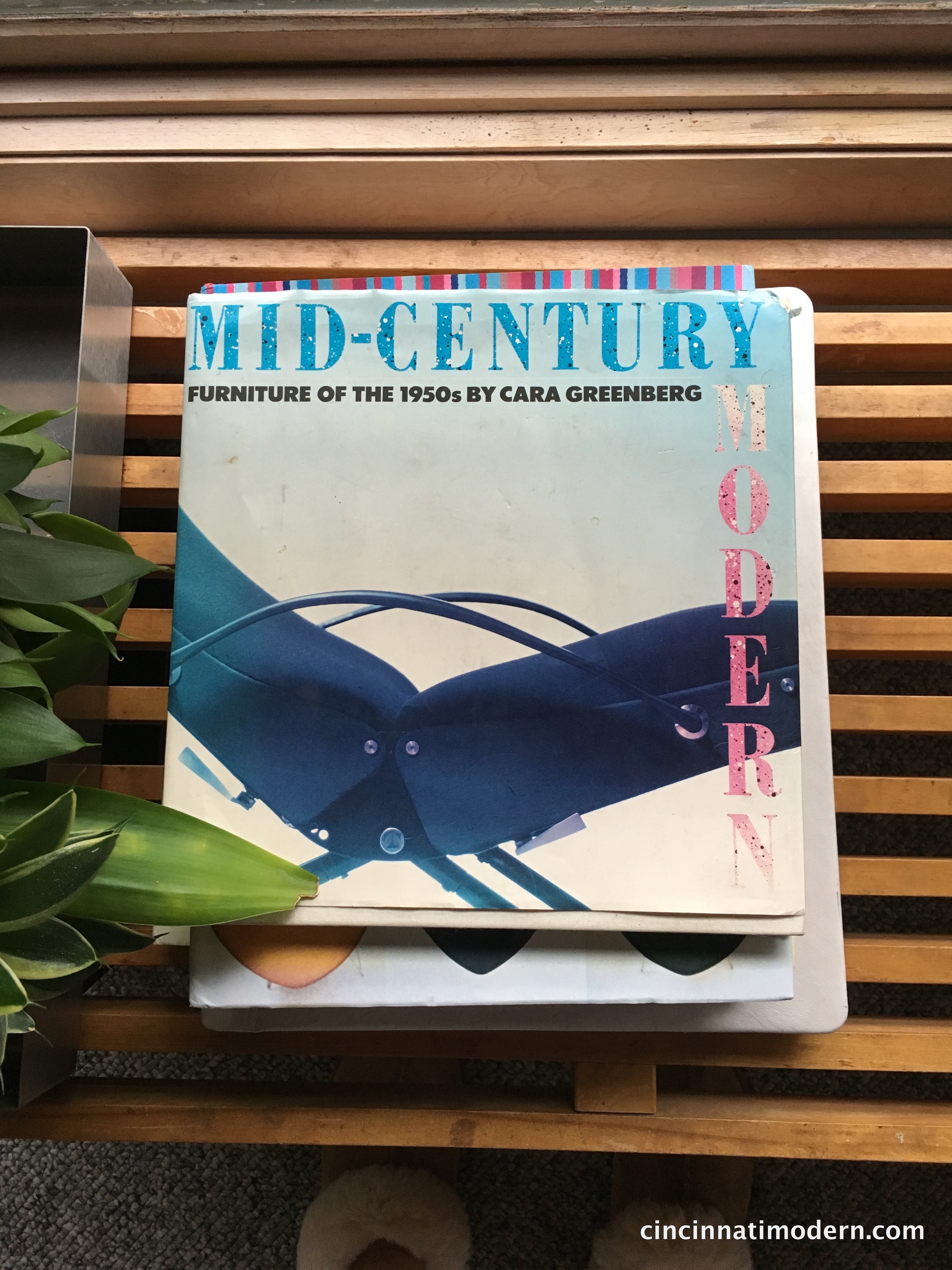 our well used and loved 1st edition 1985 copy of The Book. very strange to think that this book itself is now a collector’s item!

our well used and loved 1st edition 1985 copy of The Book. very strange to think that this book itself is now a collector’s item! 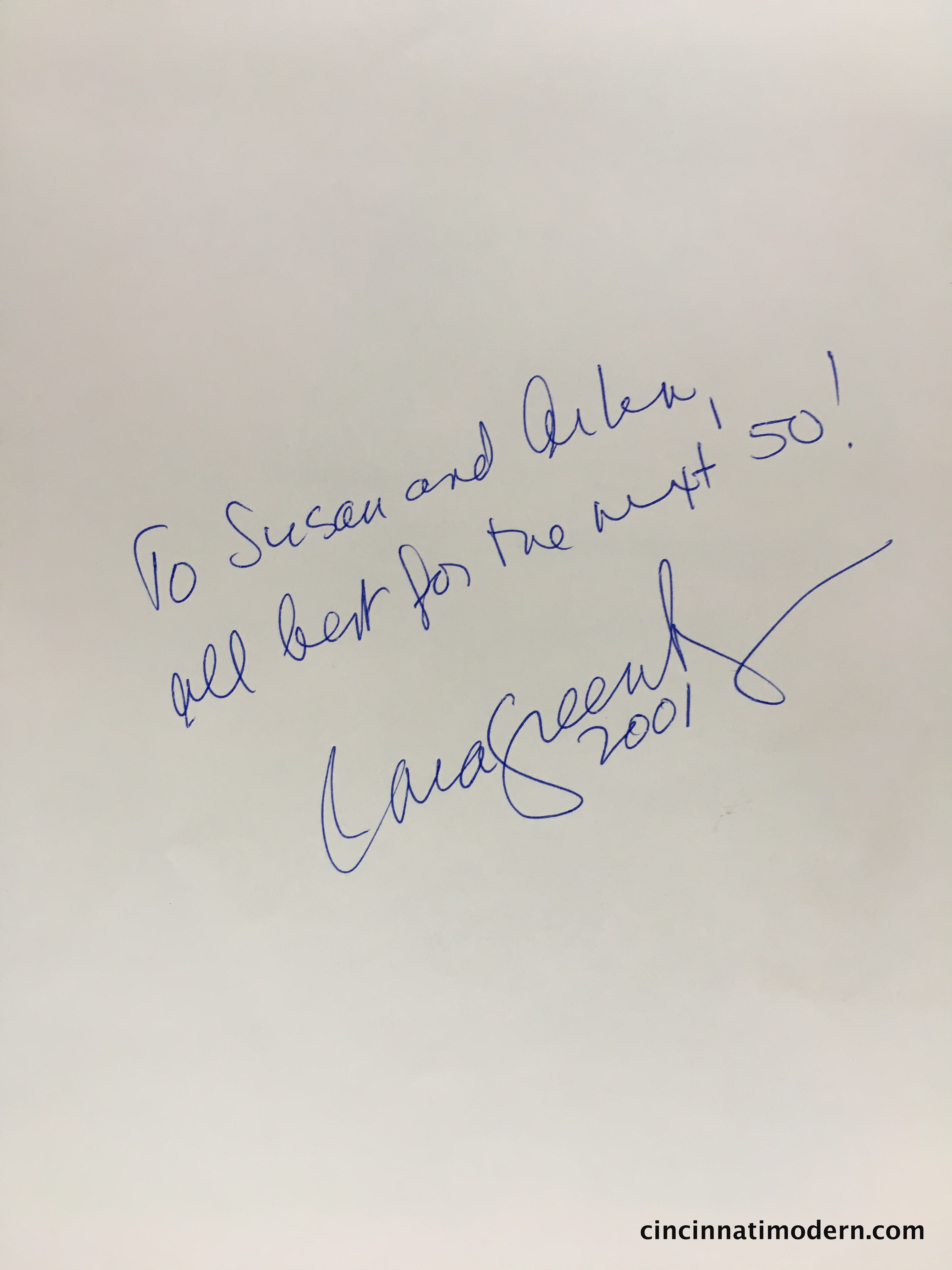 The Book became our bible, our shopping list.  While driving around looking for the cool houses and neighborhoods, we went to estate and moving sales looking for the ‘dated’ midcentury modern pieces that no one wanted.  We knew the “pedigreed” pieces from The Book.  There was very little competition at at the time and we amassed a pretty good collection for very little money.  Which is a good thing, because that is all that we had.  3 George Nelson Coconut chairs for $25?  Sure!  A Nelson ball clock for $1?  We’ll take it!

stay tuned for part 3 of in the beginning!