in the beginning, part 3 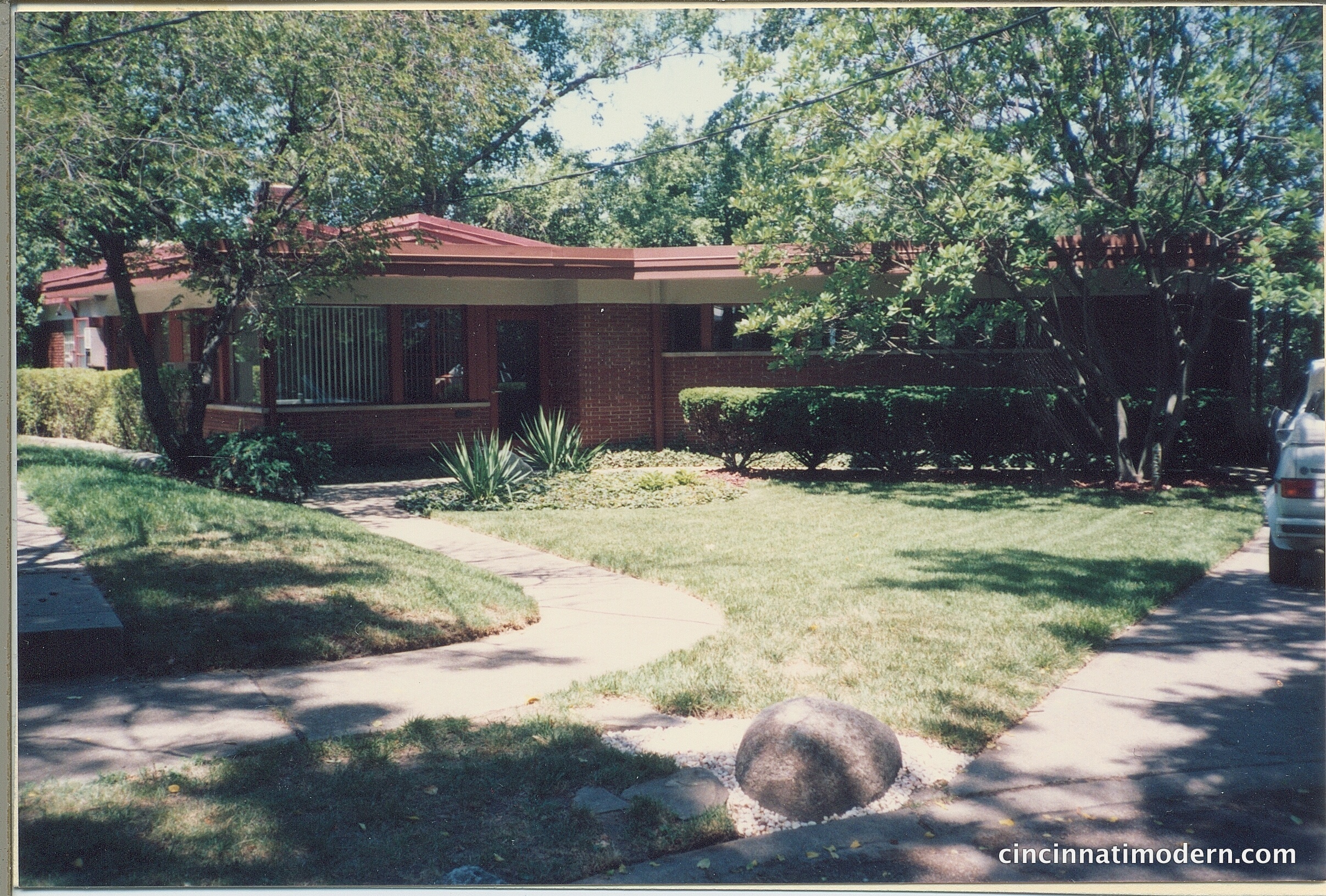 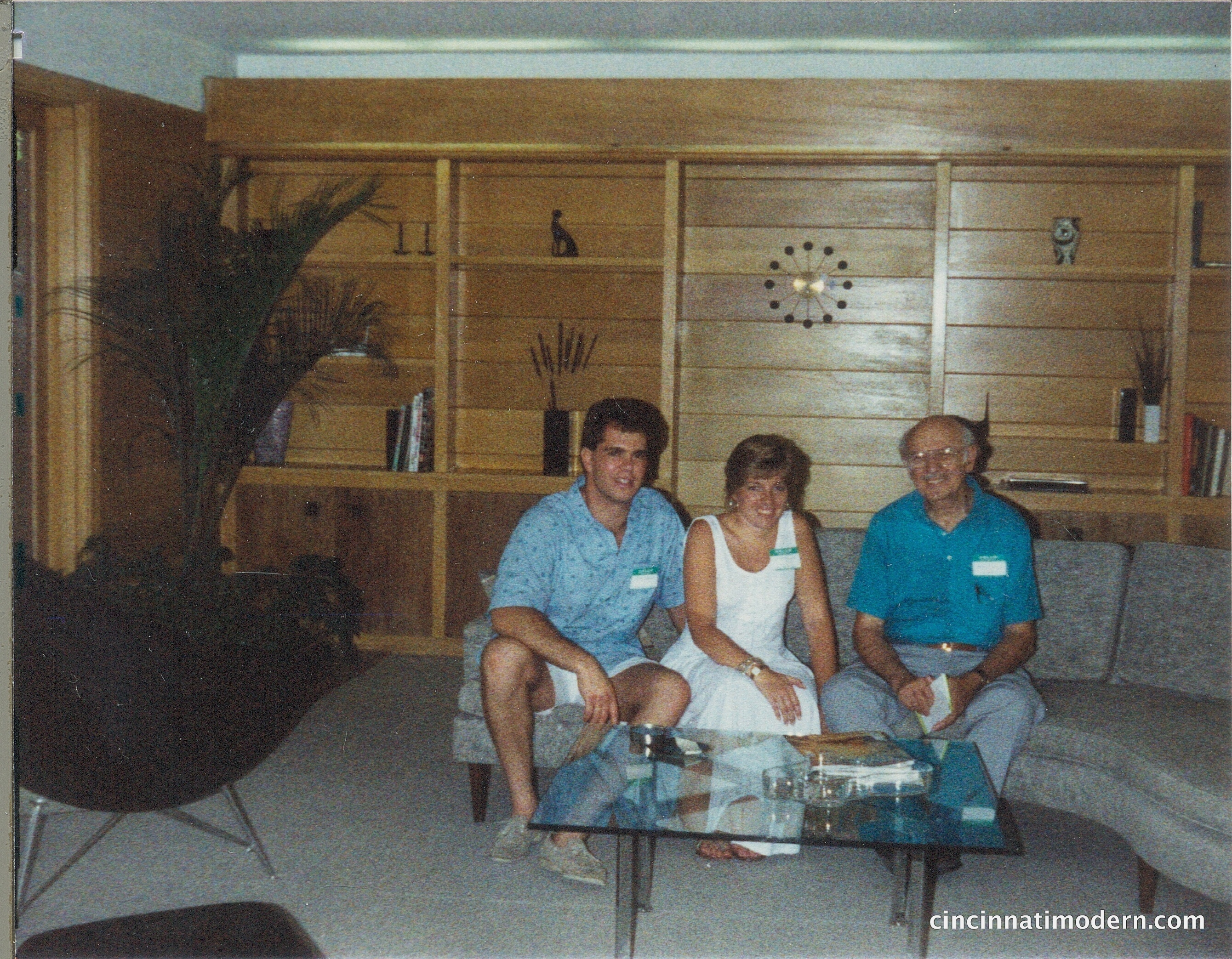 a very young Susan & Arlen hanging with Abe Dombar in our house. photo circa 1988

Part 2  left off with the mention of a fateful moving sale.  But before I tell that story, let me give a little more context.

I was born in 1962, which, in my opinion was the pinnacle year of good design (just watch The Jetsons or the Dick VanDyke Show and tell me I am wrong).  It was a time when kitsch was waning and fashion had caught up with architecture.  Jackie Kennedy was a worldwide fashion icon and Lilly Pulitzer was entertaining barefoot in new silhouettes of citrus inspired mod prints.  This past year, Target launched their ‘good design’ line called Project 62, named after that fateful year when they were founded and design was at its peak.

Good design must be in my DNA.  I have vivid early architecture memories of houses I was in – one with a spiral staircase, one with a sunken living room, and perhaps the most striking, of vacationing in an A-Frame with exposed beamed ceilings in northern Michigan.  All of these memories were from before the age of 5.  When I was 6, my parents built their dream home in “phase 1” of a large subdivision in Sylvania, Ohio.  My childhood from then on was spent playing in giant piles of sand when the foundations were dug for neighboring homes, and my favorite thing – walking through the new houses at the end of the day after the construction crews left, and trying to imagine what the layout was going to be with only the framing in place.  I learned architecture from the inside out.

My mom filled our house with contemporary design circa 1968.  Shag, avocado & harvest gold were new words in the vocabulary.  My mom was also an early ‘picker.’  We would go to estate sales and she would find furniture pieces or paintings that she would remodel to fit the aesthetic and color scheme of our new house.  Through it all, and even though most of my friends’ houses were more traditionally styled with early American furniture and the requisite ‘French Provincial’ bedroom sets, I held on to the contemporary style I was raised on.  By the time I was finding furnishings for my first college apartment (see in the beginning, part 2), many contemporary loving people were discarding their midcentury furnishings (cheap!) and transitioning to the ‘new’ Eurostyle look of the 80’s.

So when Arlen and I got married and were looking for our first house,  I naturally wanted one of the ’50’s Modern’ houses that I had always loved.  My first job out of college was decorating an expansive Carl Strauss MCM house in Amberley Village.  I knew the cool houses existed in the higher price range, but was there anything out there that we could afford?  There had to be some here, right?!   Just try telling a Realtor in 1986 that you were looking for 50’s Modern house.  They had absolutely NO idea what we were talking about.  There was no internet.  There were no search engines.  You had to look through pages of printed MLS books to see one grainy b& w photo.  And these houses were at the time 20 – 35 years old and had very much fallen out of favor, so agents tried to conceal the fact that they were modern (aka ‘dated’).   With no other choice we took to driving around on the weekends looking for houses and familiarizing ourselves with neighborhoods when we happened upon a moving sale in Paddock Hills.  One step through the front door and that was it.  Life changed forever!!

While it looked modern from the front, we were absolutely gobsmacked when we walked inside!  Sunken living room, central fireplace, wall of windows to the woods.  It was perfection (Marry Hennigan, I’m talking about your house :)!  The owner told me is was a ‘Ben Dombar.’  Who the heck was Ben Dombar and how do we get one?!   We were crushed that the house was already sold, but there were others….  We put the little central neighborhood of Paddock Hills on our weekly driving list.  There were a handful of these amazing modest sized modern homes in a neighborhood that we were pretty sure we could afford.  About a month later, while driving through the neighborhood again we spied a for sale sign at the end of a cul de sac.

So much for playing it cool!  As soon as we walked in the front door I ran down the hall squealing.  Right then and there, we became MCM homeowners and never looked back (ok, well there was a loan and things, and Arlen’s dad had to co-sign for us because interest rates were in the teens then, but that’s a story for another day- suffice it to say that we got the house!).

The house came with the original blueprints, referencing the original owners (Dr. and Mrs. Nathan Abrams) and the architect (Abrom Dombar).  I looked Mrs. Abrams up in the white pages and she told me the story of designing and building her dream house with Frank Lloyd Wright protege ‘Abe’ Dombar.  Then I called Mr. Dombar and he seemed so grateful that someone – 35 years later – had discovered one of his designs and loved it.  He filled me in on more details about our house and his amazing career and education with Mr. Wright.

Fast forward to 2003.  I had amassed a pretty good knowledge of brothers Ben and Abe Dombar’s homes.  And those much more high profile homes of Carl Strauss and Ray Roush.  Aside from our friends Amy and James Keller, we really didn’t know anyone else who loved and ‘got’ modern architecture.  But the movement had started, and we knew that there were Realtors in Florida and California specializing in Midcentury Modern architecture.  Why not do it in Cincinnati?  The 20th Century Cincinnati show was transitioning from a mixture of Deco to more MCM.  The homes were 40 – 50 years old at that point, and many were changing hands for the first time.  The time was right to get my real estate license and give the homes a voice and create a platform for people who loved them to find them.  I was sure there had to be more people out there besides us who were crazy about this architecture.  Right?! The thought of homes going to people who did not appreciate them and understand them was just too much to bear.  The houses needed a voice, and it was me.

So cincinnatimodern.com was born.  At the time, I thought it would be a good part time gig.  I had no idea that Arlen would end up getting his real estate license, too and it would turn into our life’s work.  And I certainly had no idea that we would find and form such a dynamic community of other people passionate about this architecture.  When I see listings now from other agents touting ‘midcentury modern,’ I chuckle.  They don’t always get it right.  But they know that it’s something that people want.  We knew it all along. 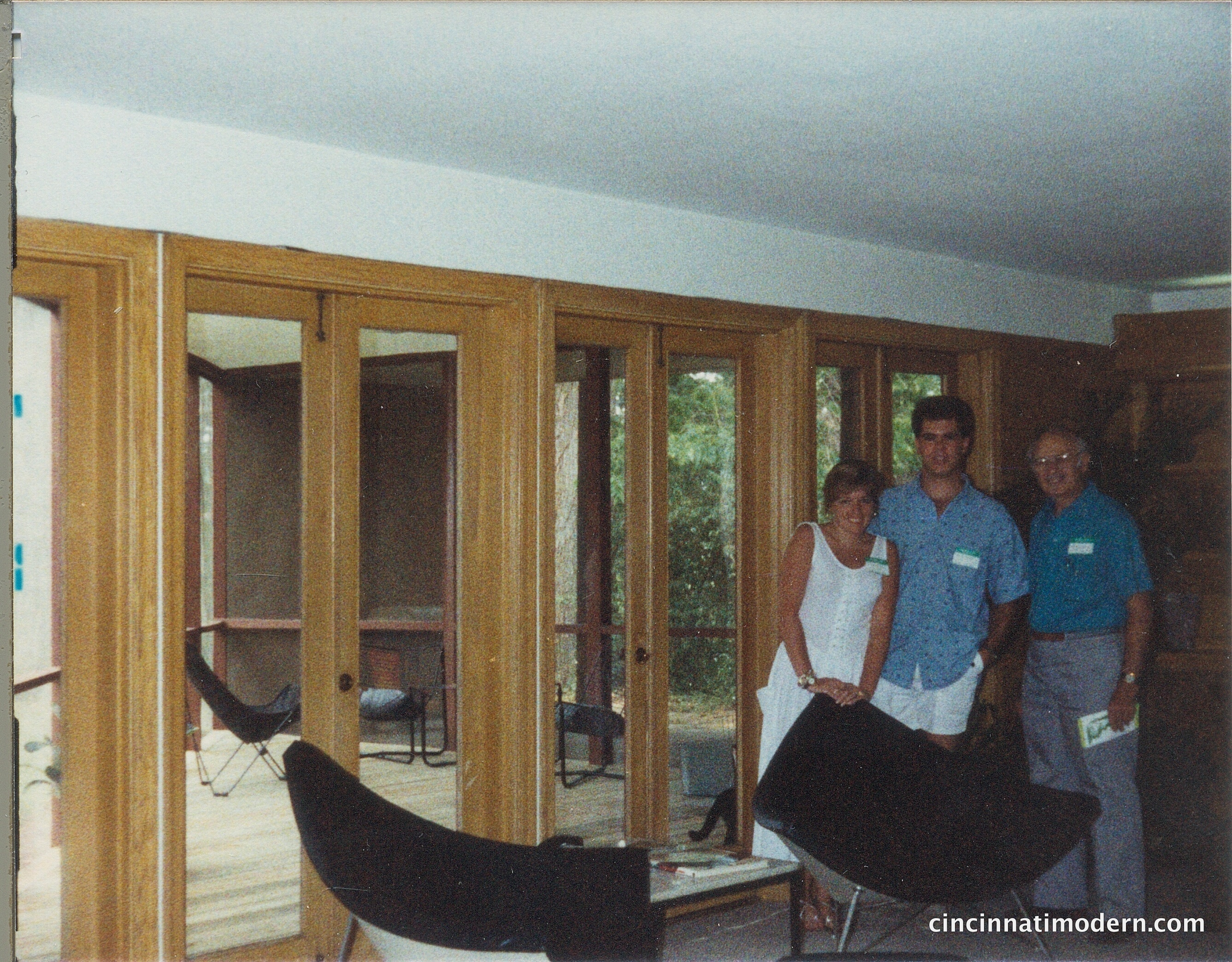 hanging with Abe in our house on a Paddock Hills house tour in 1988. 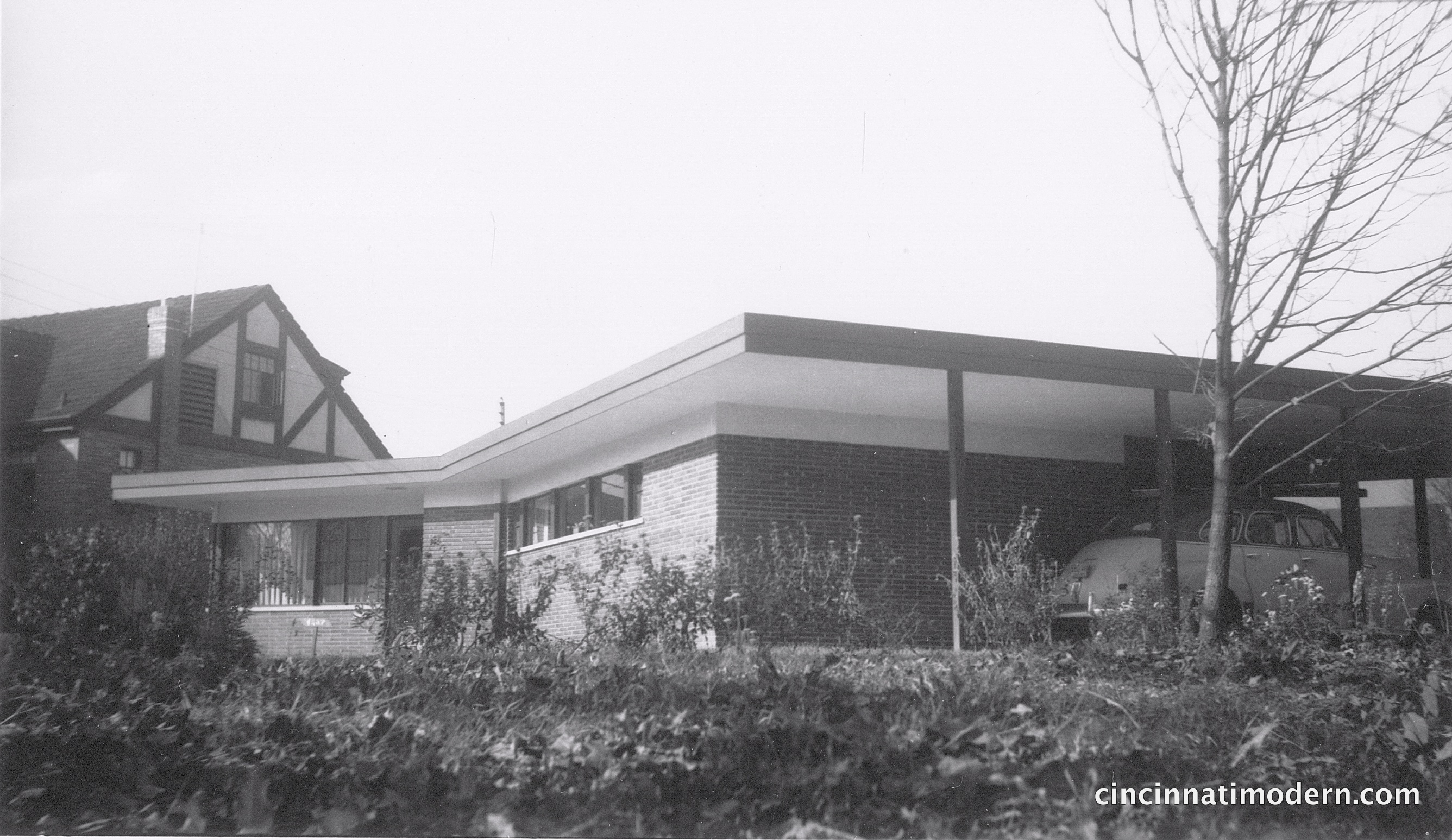 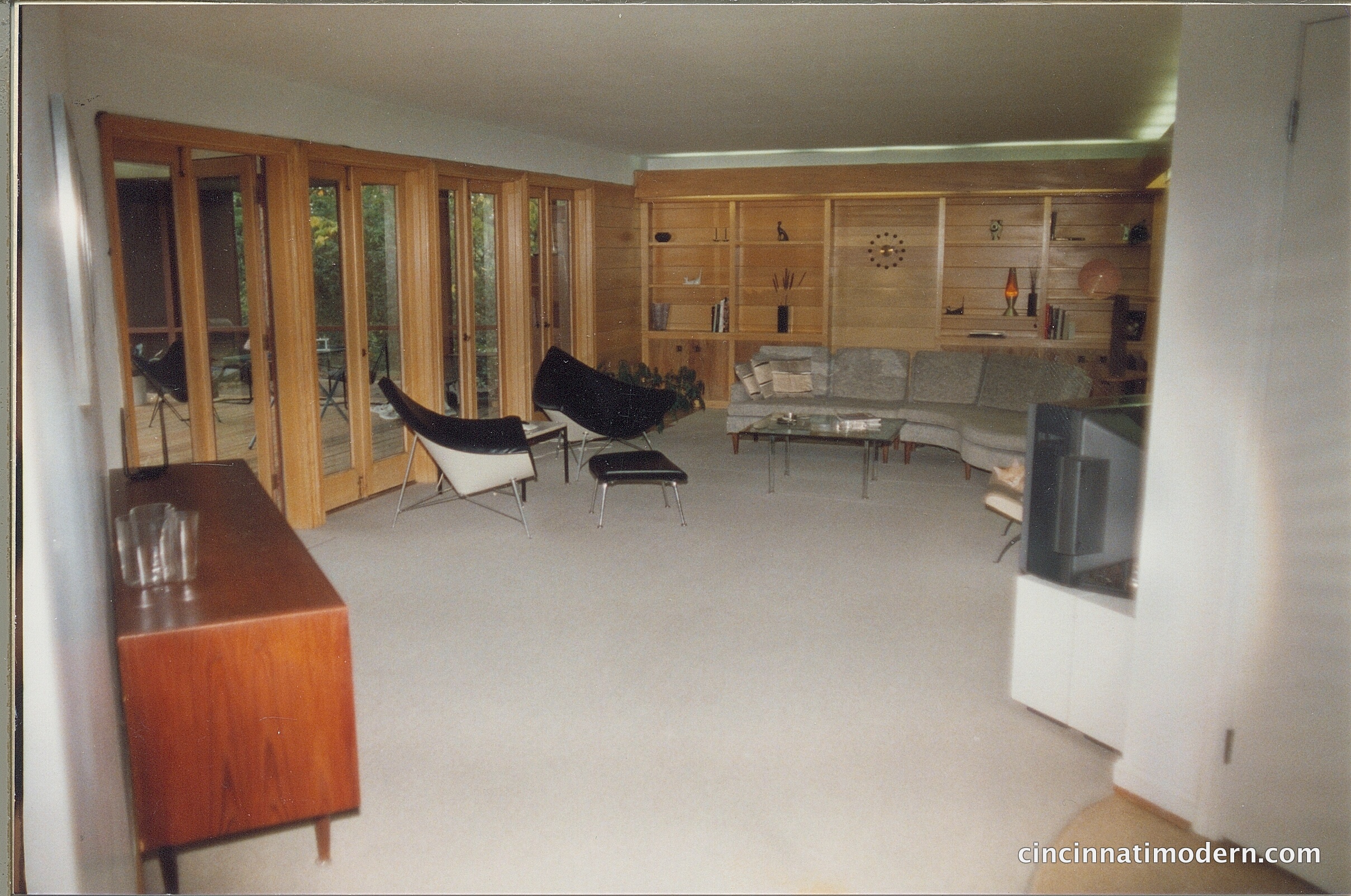 the living room of our home circa 1988. notice the vintage sectional mentioned in the previous post! 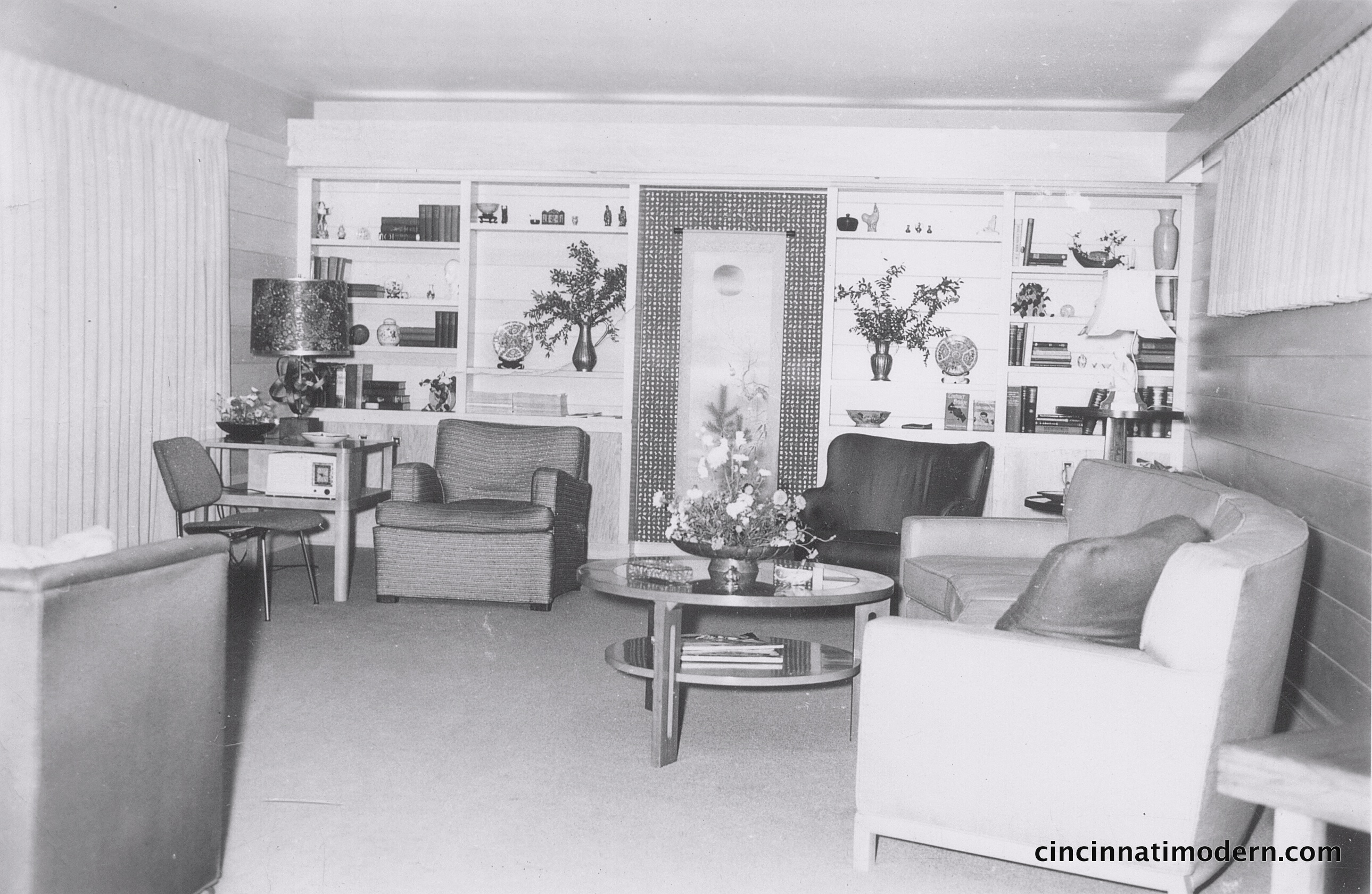 vintage photo of the same living room from a 1950 Cincinnati Post photo shoot. cincinnati post article about our first house, circa 1950 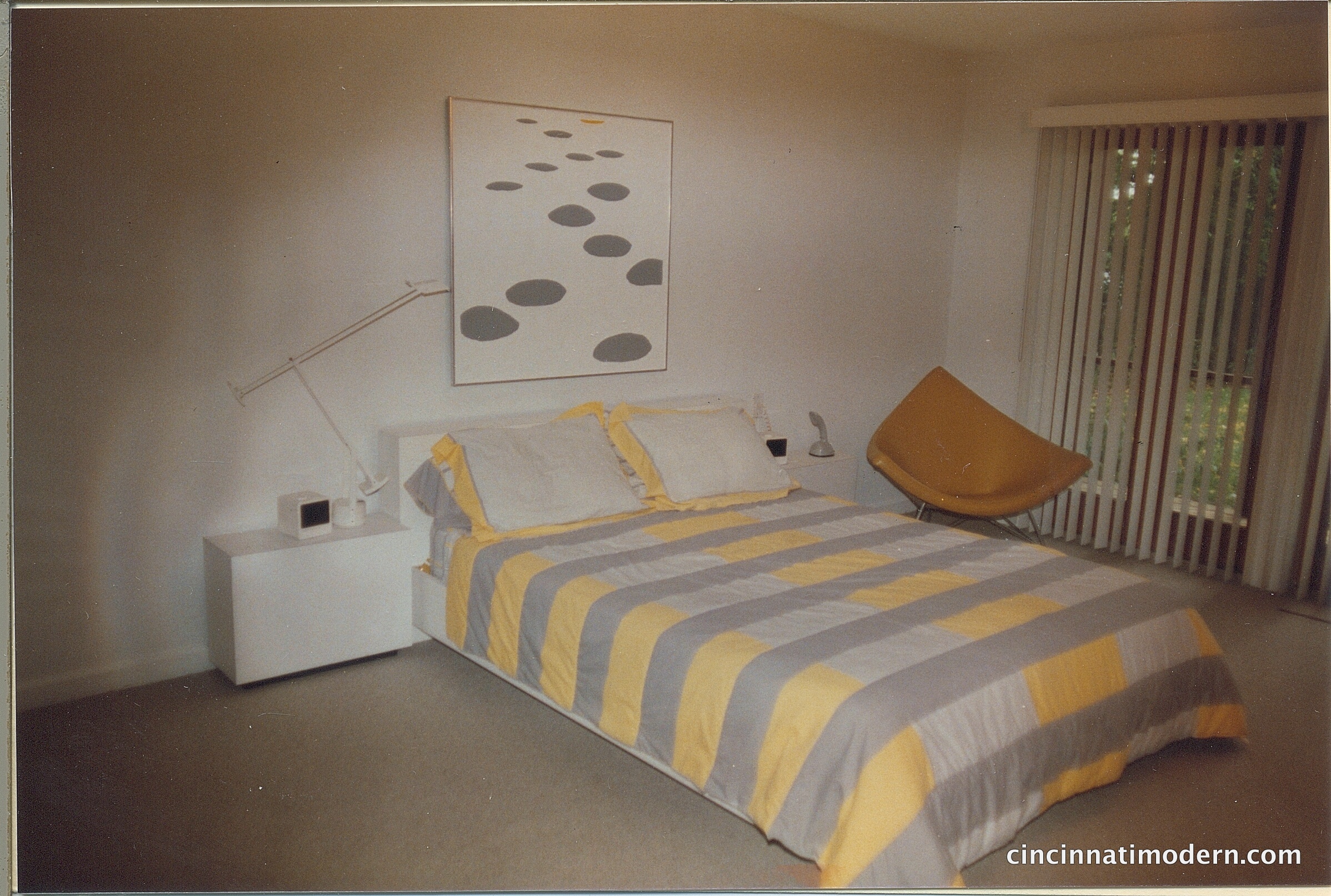 our paddock hills bedroom in 1988 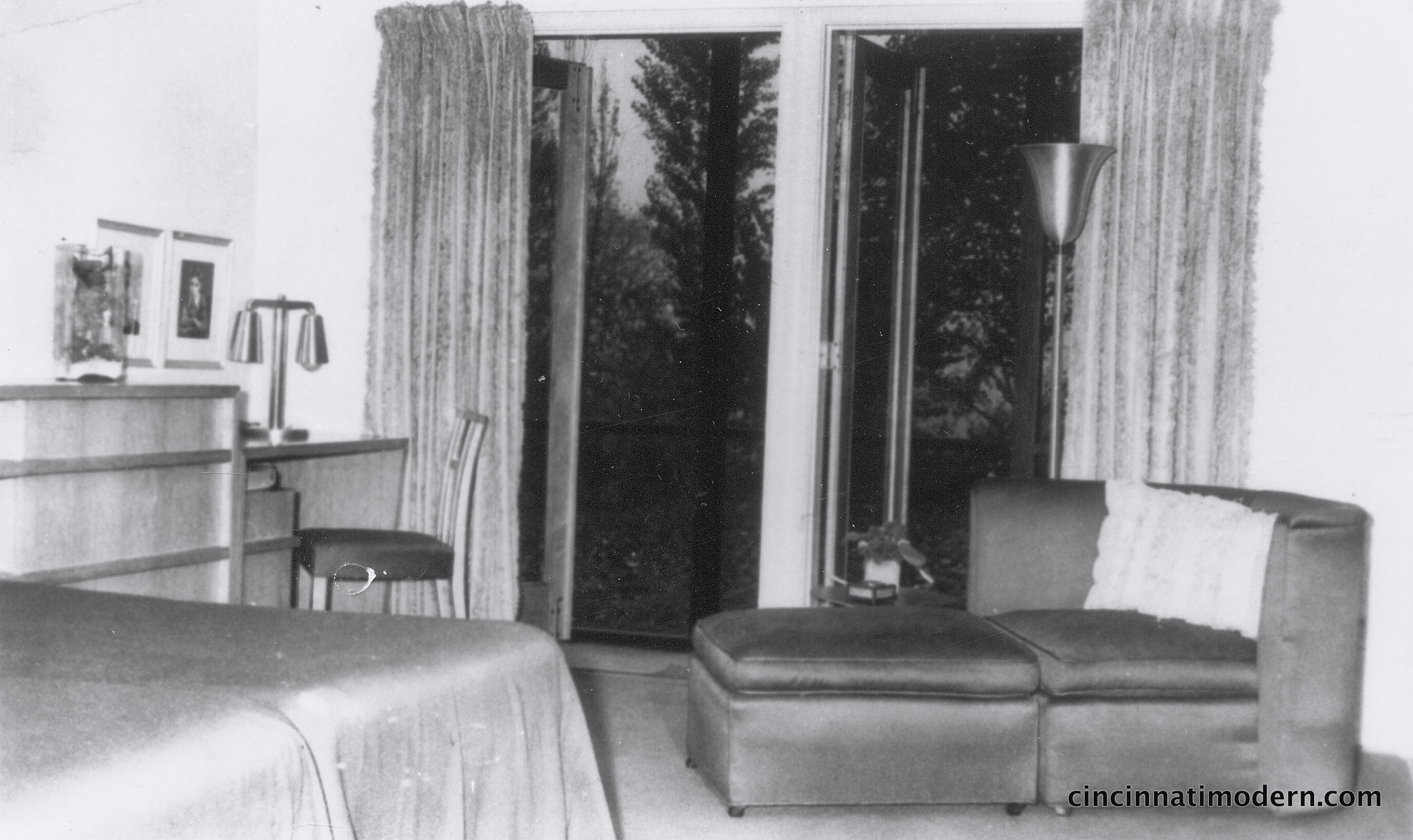 abe dombar’s children april and david in front of ‘our’ house, circa 1950. 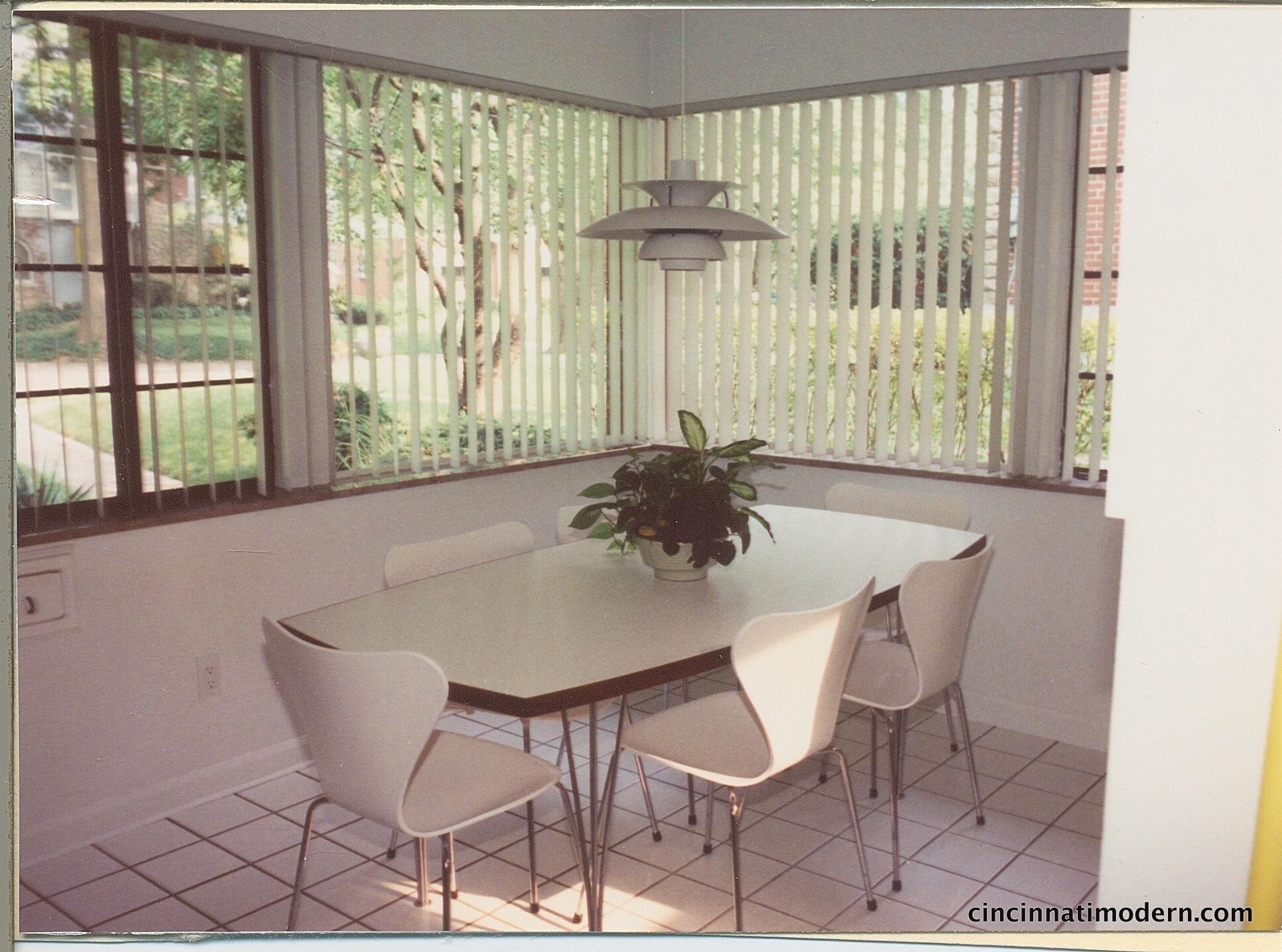 our dining room, circa 1988. we still use this same light fixture, table and chairs today! 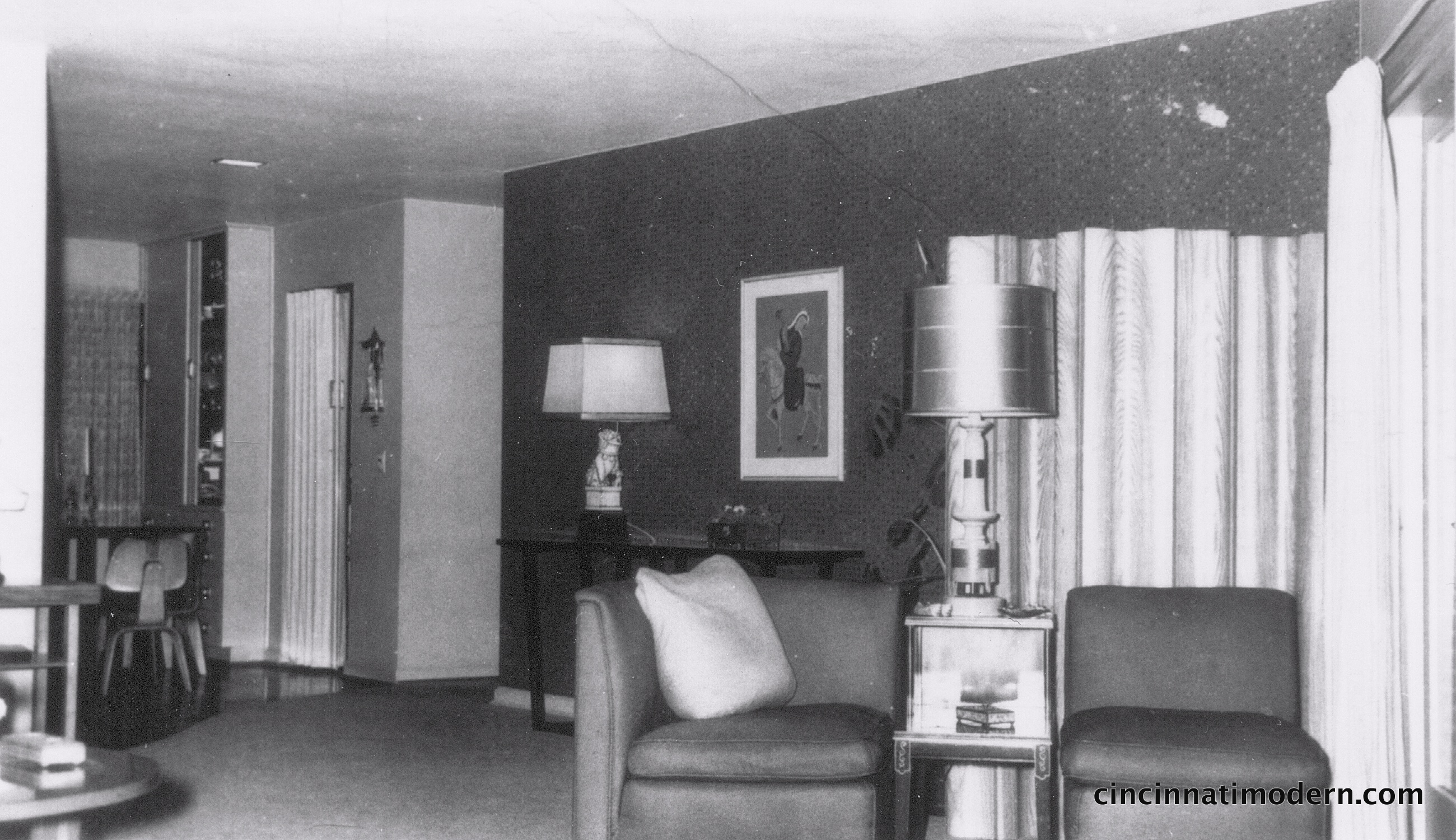 in the beginning, part 1

in the beginning, part 2