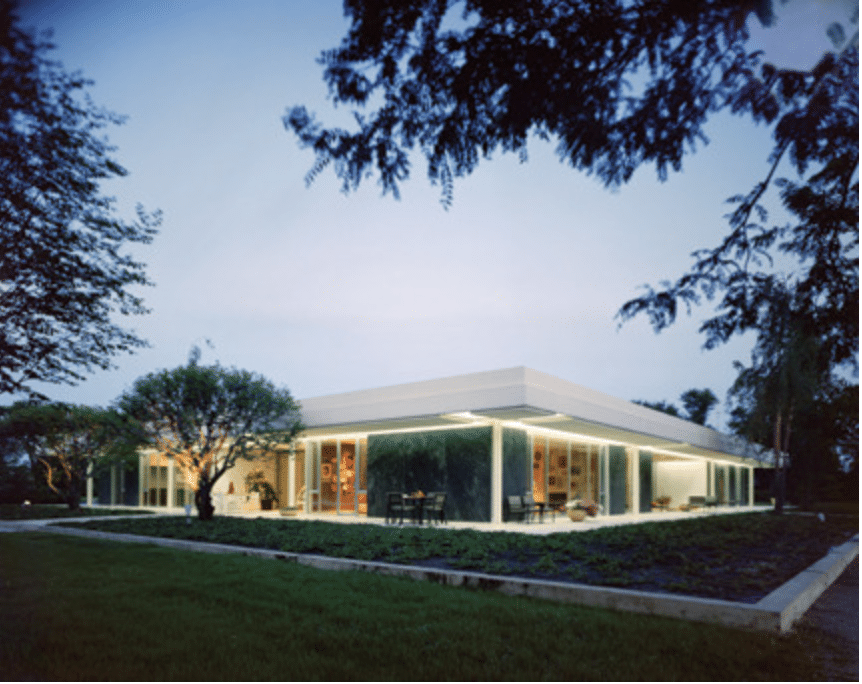 For the past 10 months, I have been trying to figure out how to write about one of the most moving experiences of my life.   I am rarely speechless, but this event was so deeply touching and personal, it rendered me completely verklempt.  I have eluded to my experience on occasion, but I have not written of it – until now.

What, you ask, could have affected me so?  First, let me back up about 25 years.  My early education on modernism was from a few books that I acquired beginning in the 1980’s – long before the internet and eye-candy laden periodicals such as Atomic Ranch and Modernism and Dwell.  ‘Mid-Century Modern’ by Cara Greenburg was my modern furniture bible/wishlist.  Various architecture books, including ‘Contemporary’ by Lesley Jackson, an old architecture textbook, and a book on the architecture of Eero Saarinen not only fueled my passion to learn more about architecture, but gave me inspiration for projects in my own house(es). 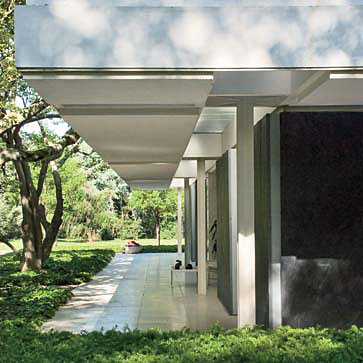 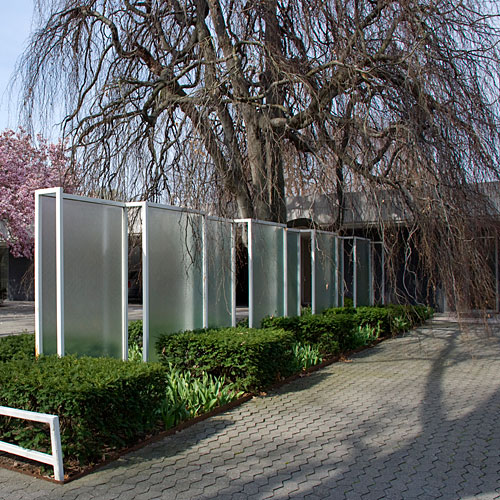 If you stare at a house in a book long enough, you can start to idolize it.  My first love in architecture is undeniably Case Study House #22 (the Stahl House) by Pierre Koenig.  Overlooking the Hollywood Hills, this house and the iconic photography by Julius Schulman is a study in modern perfection.  A close second has always been the mystical ‘Miller House’ by Eero Saarinen, located in nearby Columbus, Indiana.  Much less photographed and publicly known than the case study house, I was nonetheless particularly enthralled with the giant built-in ‘conversation pit’  in the living room.  The architecture of my youth was heavily influenced by this pit – from a ‘groovy’ house in my parents neighborhood with its very own ‘mini pit’ to my high school, built in the 1970’s, with a huge carpeted ‘pit’ commons area for lounging.  Hey, it was the 1970’s!

On our first trip to Columbus, IN three years ago, we casually asked the woman in the Visitor’s Center where the house was located so we could sneak a peek.  She politely told us – as she obviously did to others countless times a day – that she was not permitted to disclose the location and that no, the house could not be seen from the street.  Drats!

At that time, the house was still a private residence, the home of Xenia Miller (1918- 2008), widow of industrialist J. Irwin Miller (1909 – 2004).  Mr. Miller was instrumental in bringing world renowned architects to his hometown by his formation of a foundation to pay architecture design fees for public buildings.  As a consequence, the built environment of this little Hoosier burg reads like a ‘who’s who’ list of international architecture greats. 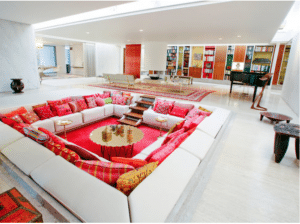 the miller house ‘conversation pit’ with textiles by alexander girard

But the Miller House held a particular mystique for me – from it’s perfectly designed minimal glass and steel frame to the marble floors to the Alexander Girard textiles (rugs, pillows, curtains) and the angular manicured gardens by landscape architect Dan Kiley.  A sucker for details, I was also taken by all of the classic MCM furniture – Eames and Saarinen chairs and tables, both inside and out.  At least in the photos, this house seemed perfect.  At the opposite end of the modern design spectrum from a Frank Lloyd Wright style modern, this sleek international style modern house appealed to me from a design standpoint, using white, glass, marble and steel as a neutral backdrop for pops of color from modern artwork and textiles. 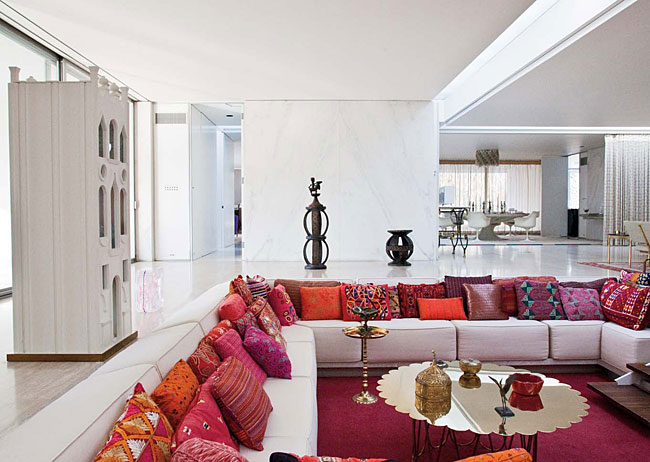 Fast forward to a very hot evening in June, 2010.  I am actually standing in the living room of the Miller House, with tears streaming down my face.   I thought I was going to pass out.  I was going to blame it on the extreme heat and humidity outside, but in reality, it was just that moving of an experience for me.  I had to remind myself to stop, breathe, and take in the moment.  And I wasn’t just in the living room – I (and the others in this group of architecture bloggers on this private and unprecedented tour) had full access to the house.  I was in the children’s quadrant, the master quadrant, the kitchen and the laundry room.  I stood in the pantry.  I was sipping wine on the patio!

I immediately realized that the photo of the kitchen that I had studied for years in my book was actually printed in reverse!  But no matter.  The house was just as perfect as I had hoped and so much more.  While standing in the living room I looked up and saw others in the room having their own very personal reactions to this amazing house. 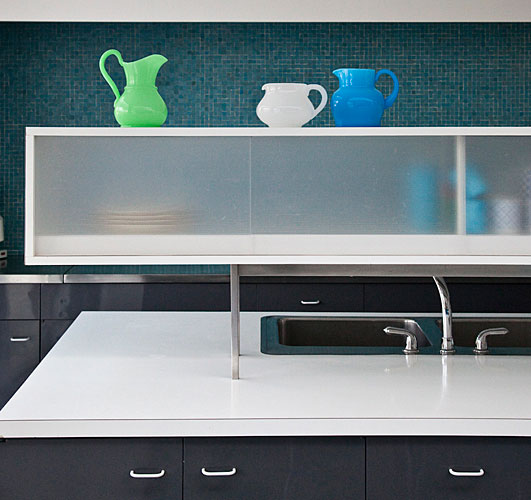 miller house kitchen detail. this kitchen is so simple and so cool, it could probably be duplicated today with ikea cabinets and ceramic or glass mosaic!

It is something you really need to experience for yourself.  And now you can.  Through the generosity of the Miller family, the house has been donated to the Indianapolis Museum of Art (IMA), and through our friends at the Columbus Visitors Center is open for public tours starting next month.   This opening has created a media frenzy, and for good reason.  A house that functioned so well as a family home for 50 years will now function to inspire a new generation to embrace good design.

cf3 has a private tour of the house scheduled for July 16.  To find out more details, join cf3.  The tour is limited to 39 people.  Don’t want to wait or can’t make the 16th?  You can book one of the regular public tours by clicking here.

If you are like me and still want to know more about the house, attend the Miller House Symposium on May 20 at the IMA in Indianapolis.

This post is part 3 of 3 of my Columbus, IN chronicle.  Check out my other Columbus posts:

Giving Thanks to Columbus

← a funny thing happened on the way to a swim meet westward ho! →