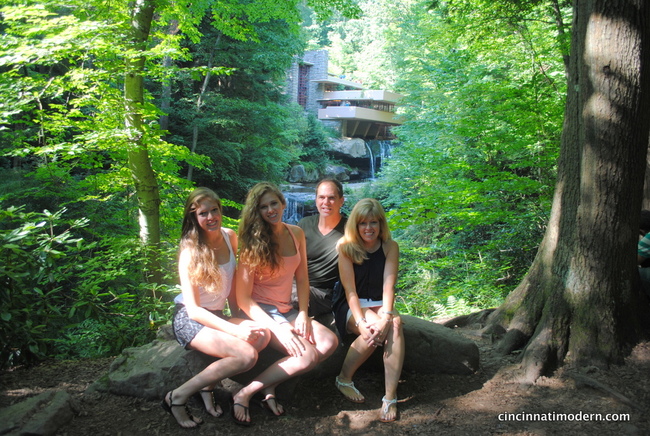 tenley, kirsten, arlen, and susan at the iconic photo spot at fallingwater

We found ourselves with just a few days this summer when 4 of the 5 Rissover clan were available for a short vacation.  So we started exploring driving destinations and settled on a trip to western Pennsylvania.  What?  Not your first choice for Vacation?  I think our 3 day trip just may change your mind.  We left early on Tuesday morning and drove straight to Fallingwater for our 3:00 tour.  Arlen and I had visited this Frank Lloyd Wright masterpiece a few summers ago, and knew immediately that we wanted to bring the kids back to see it sometime.  And even though I had seen it before, I still found it breathtaking.  So much more in person than it is in photos.  Although we did not do the in-depth tour that allowed indoor photography, it was a beautiful day and Tenley, our family photographer, had a great time capturing the exterior vistas and the landscape. 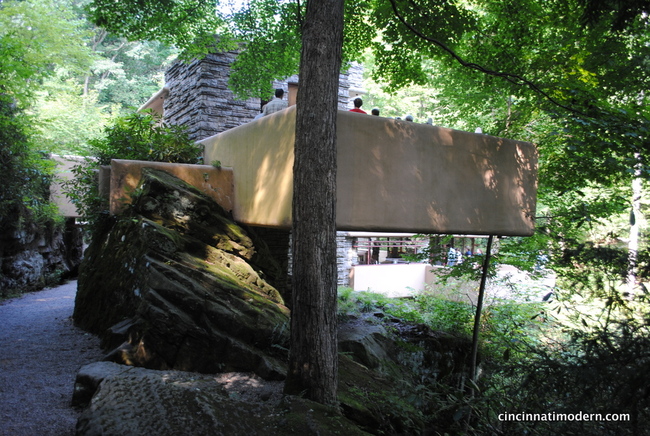 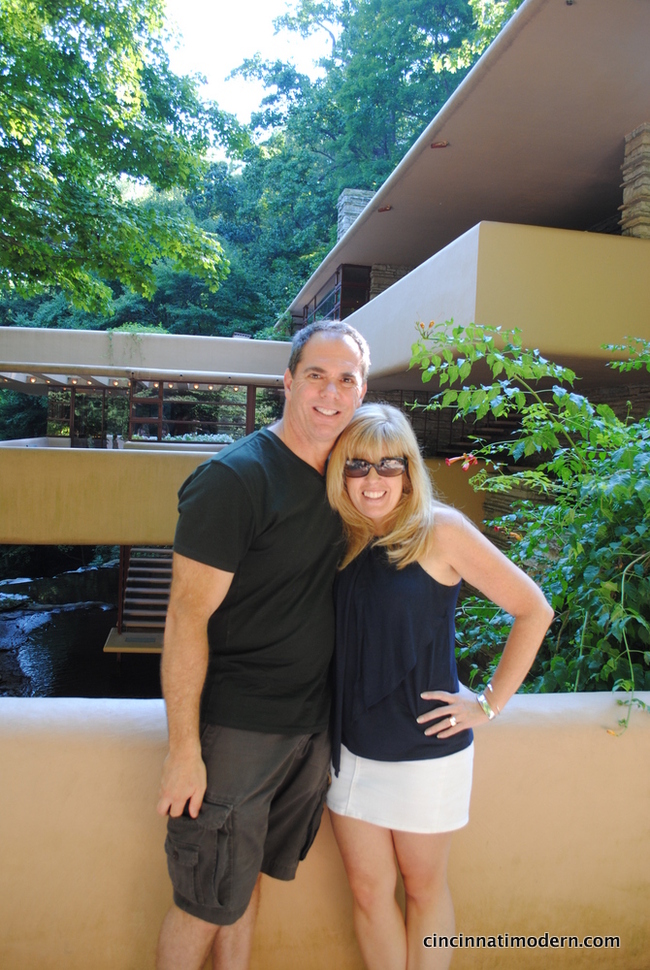 the last time arlen and i visited, this bridge area was under construction. now, it looks brand new again! just goes to show that even the best designed homes need lots of maintenance and tlc! 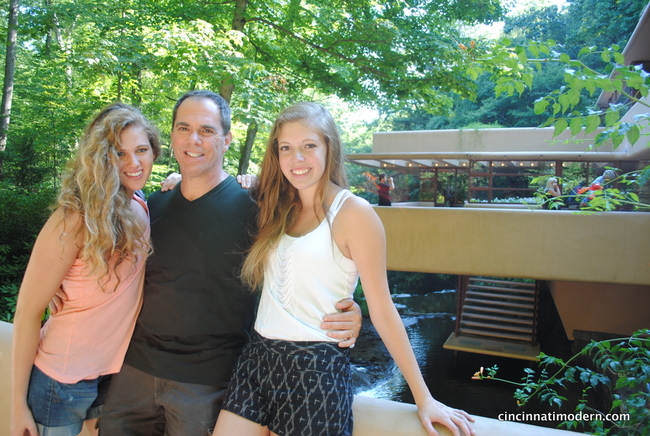 arlen and his girls with an awesome backdrop. wish trent had been with us, too. would have made a great holiday card photo!

We had to plan our excursion for mid week, because not only is Fallingwater closed on Wednesdays (sorry, folks, moose outside shoulda told ya), but so is the other nearby FLW house, Kentuck Knob.  Since we saw Fallingwater on Tuesday and could not visit Kentuck Knob until Thursday, that left Wednesday to go whitewater rafting on the Lower Yough.  The tiny town of Ohiopyle, PA sits conveniently right between the two houses (which are just a few miles apart) and is a summertime rafting mecca.  We stayed at the Yough Plaza Motel, the only accommodations in town, as far as we could tell.  The room was clean, but there could have been a little more rustic charm.  It was pretty devoid of any sort of personality.   The town is bustling during the day, but is a ghost town at night. 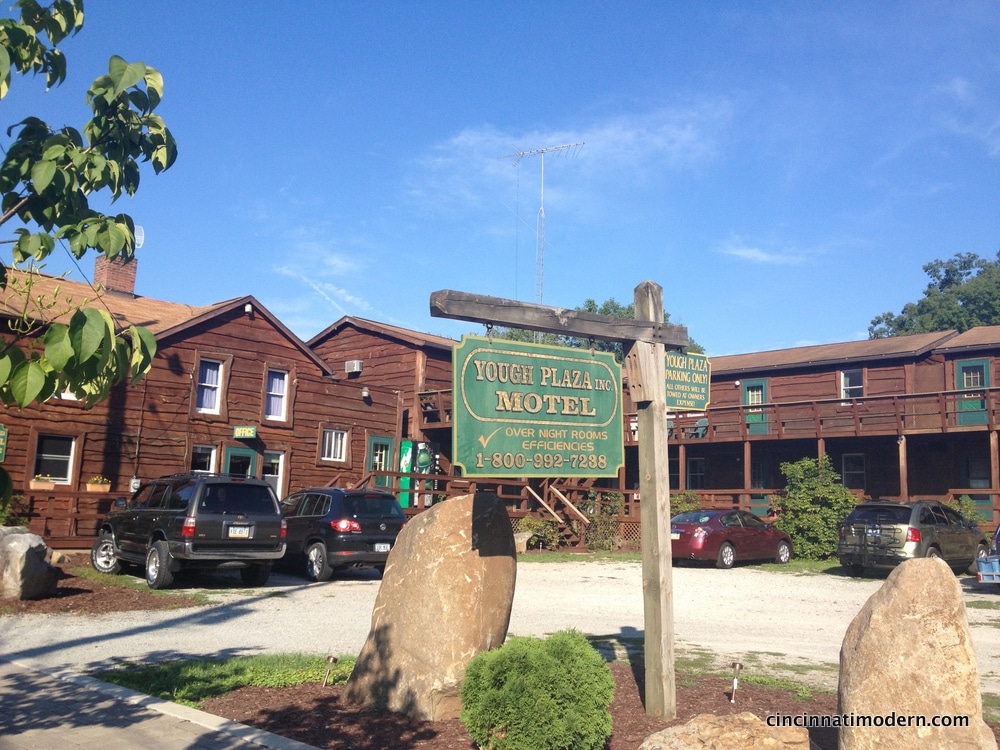 our home for two nights. 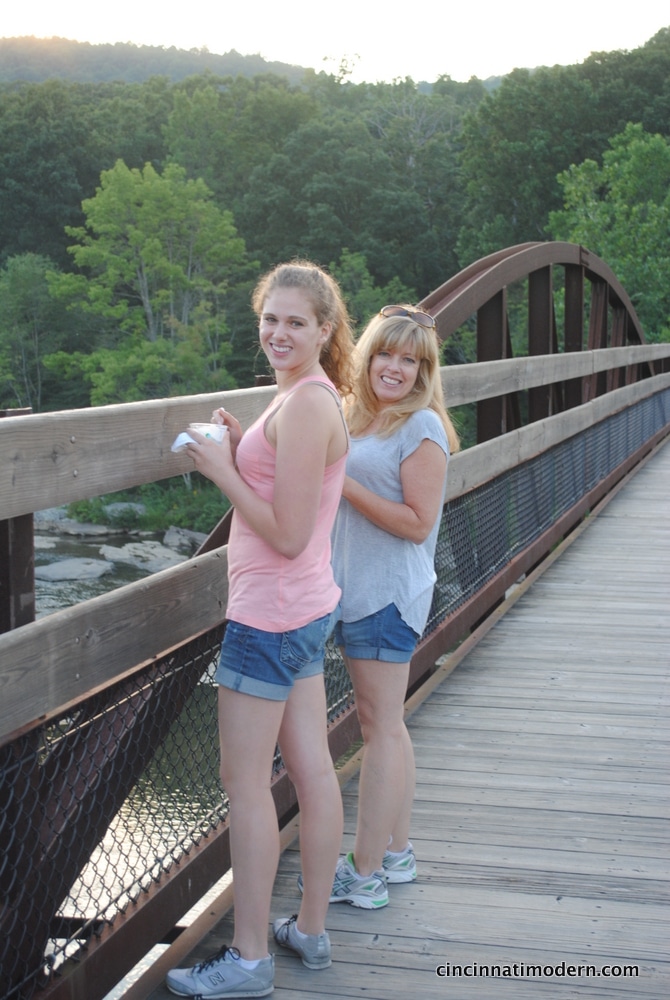 pedestrian bridge in ohiopyle, pa, just a short walk from our motel. 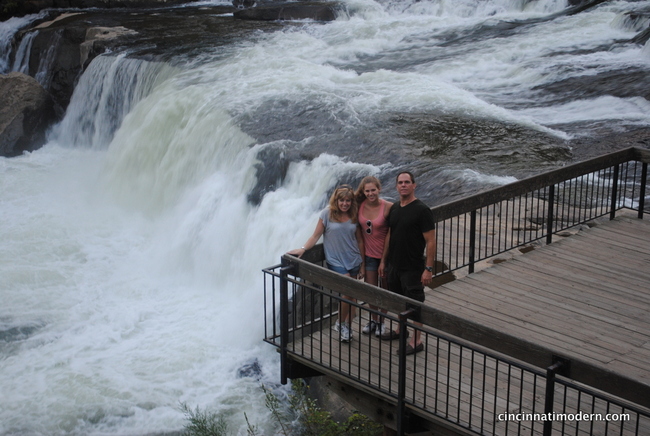 some of the waterfalls in ohiopyle. it was beautiful! the rafting trip starts just downriver from here

We met the owner of our motel on our second night there as we were playing mini-golf on the 9 hole course right next door (our girls had never played mini golf before, but that’s another story).  She also owns the rafting company (Whitewater Adventures), the mini golf, and a bike rental.  She’s 80 years old and has lived in that tiny town her whole life.  I resisted the urge to tell her that perhaps the motel would be more successful if it picked up on the FLW theme….I don’t think it would have gone over well.  But still – she did say that she would like to sell it and I did think about it for about a minute. 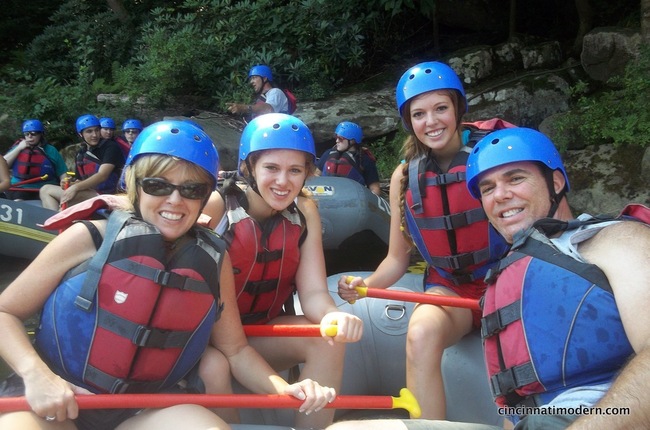 rissovers just about to set out rafting 🙂

Our rafting day was a sharp contrast to the house tours, but did still revolve around the central theme of the river and the mountains.  After we signed our lives away on the rafting waviers, we loaded on a bus and headed to the river.  It was an exhilarating 6 hour trip through mostly class 3 and 4 rapids (not quite sure what that means, never having rafted before).  Both Kirsten and I got tossed out of the raft at different points, but did live to tell about it.  The water level was low from the drought, so the rafts did get stuck on the rocks more than usual.  It was a workout, but it was absolutely perfect weather and a beautiful day.  It was obvious what drew the Kaufmann’s (Fallingwater) and the Hagan’s (Kentuck Knob) to this area.  In the days before air conditioning, it must have been a welcome relief in the summer to get away from the heat of the city and relax in the natural water attractions. 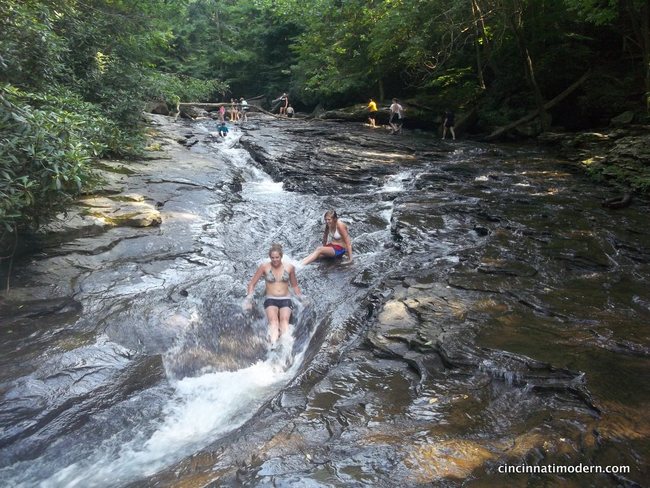 kirsten and tenley on the natural waterslides in ohiopyle, pa

On the way back from rafting, we stopped for a bit to experience the natural water slides.  Just like they sound, natural rock formations made chutes through the water.  But as Kirsten will attest, they are not quite as smooth as they looked.   Day 3 started with a quick visit to ‘Cucumber Falls,’ another natural wonder, located between the motel and Kentuck Knob.   Another great photo op! 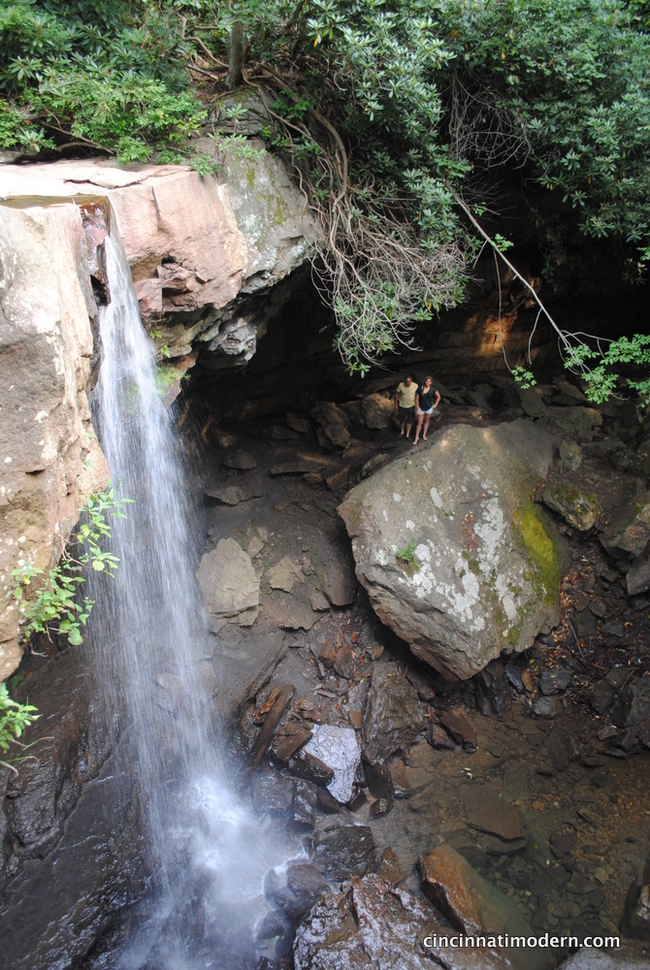 arlen and kirsten at the bottom of cucumber falls 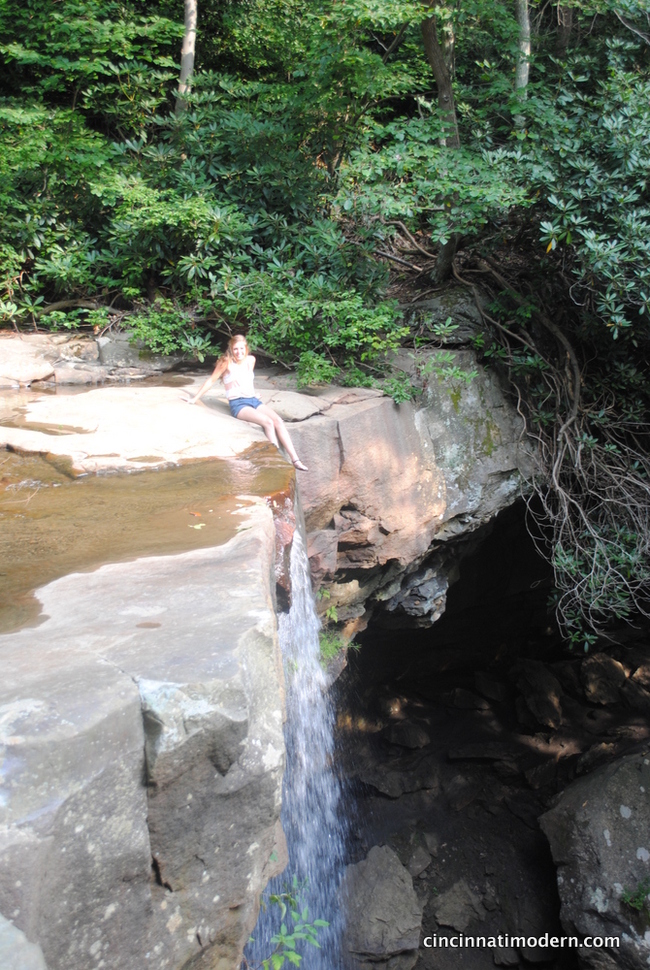 tenley at the top of cucumber falls

Five minutes later, we turned into the drive to KK.  The first thing I noticed (of course) was that the welcome center/gift shot did not seem to fit the FLW theme either.  Not sure why.  The gift shop was nice, but not as compelling as the one at FW.  There was also a cute little café, complete with Hagan ice cream (made by the original owner’s dairy and not to be confused with Haagen Dazs).  We were there for the 10 a.m. tour, so did not get to sample the wares.  The tour starts with a ¾ mile van ride up the steep hill to the ‘knob’ at the top where the house is located.  This gorgeous Usonian home, built in 1956, is also in impeccable condition.  Unlike Fallingwater, which is owned by the Western Pennsylvania Conservancy, Kentuck Knob is still owned by an individual.  Since the original owner sold it in the mid 1980’s, Lord Palumbo, has been just the right kind of architectural connoisseur to be the steward of this property.  He keeps it in near perfect condition AND he shares it with the world by offering tours. 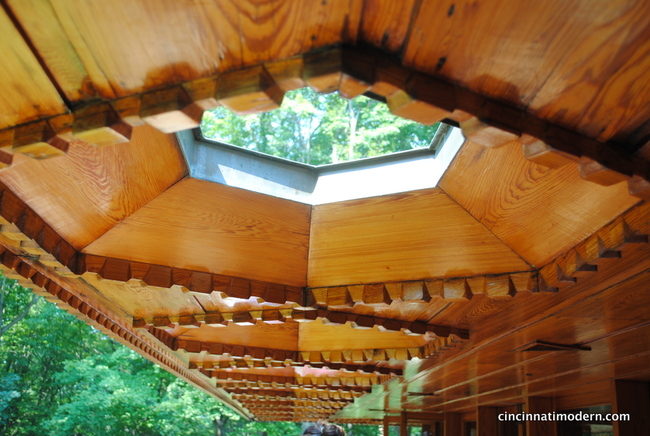 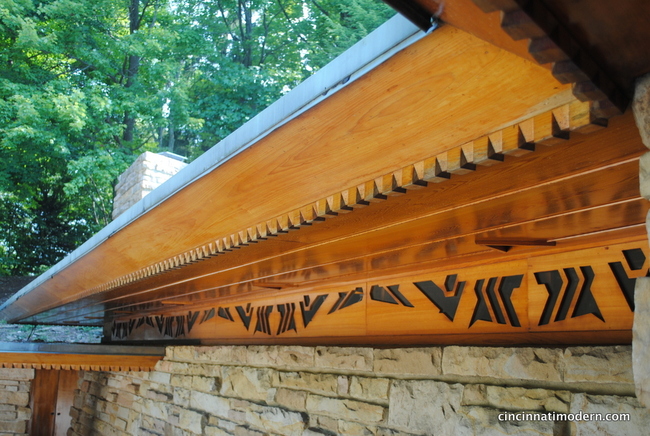 look at all that beautiful cypress kept in great condition with marine varnish. 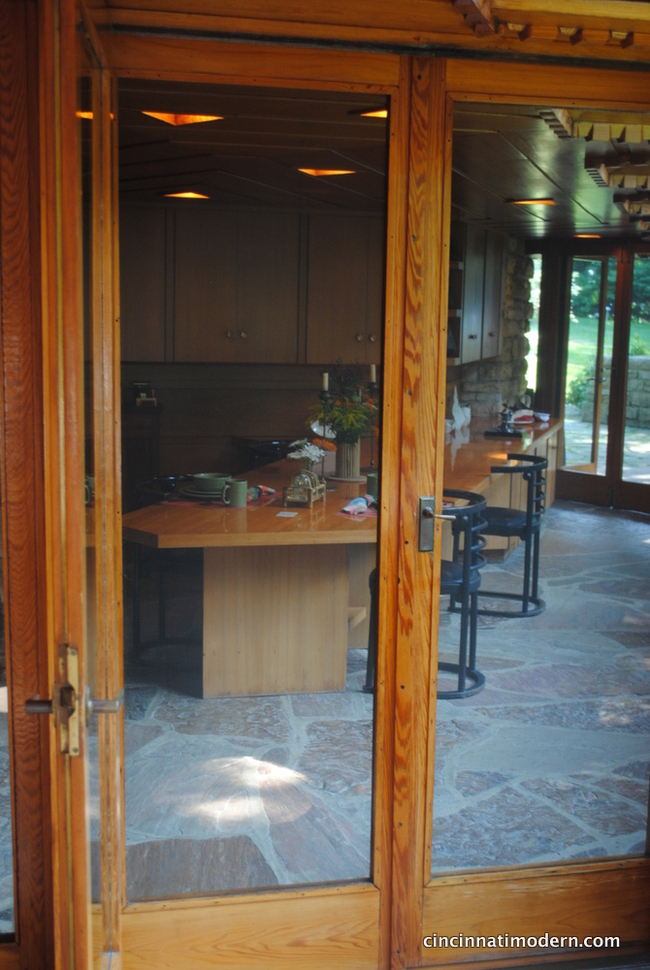 no photography is allowed inside the house, so she snuck this shot into the dining room. 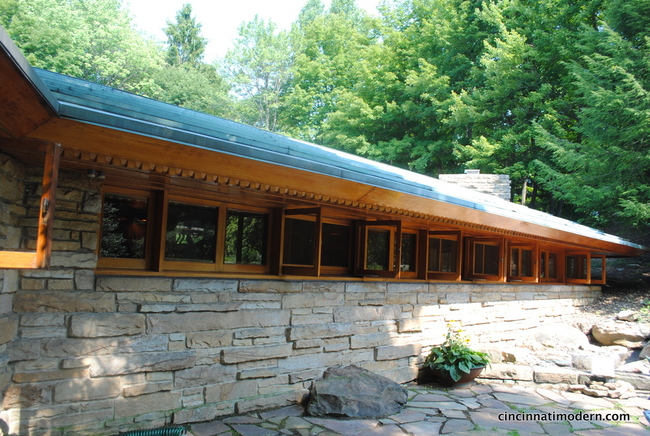 like fallingwater, lots of native stone is used inside and outside the house

When the tour was over, we had the choice of taking the van back down the steep hill or walking down and through the sculpture garden.  We chose the garden.  A 6 hour drive later and we are home.  So thankful for digital photography as I pour through the hundreds of pictures that Tenley took.  I hope you enjoy this sampling from our vacation in the Laurel Highlands of Pennsylvania!  Next year’s architourism trip: The Farnsworth House.  Stay tuned! 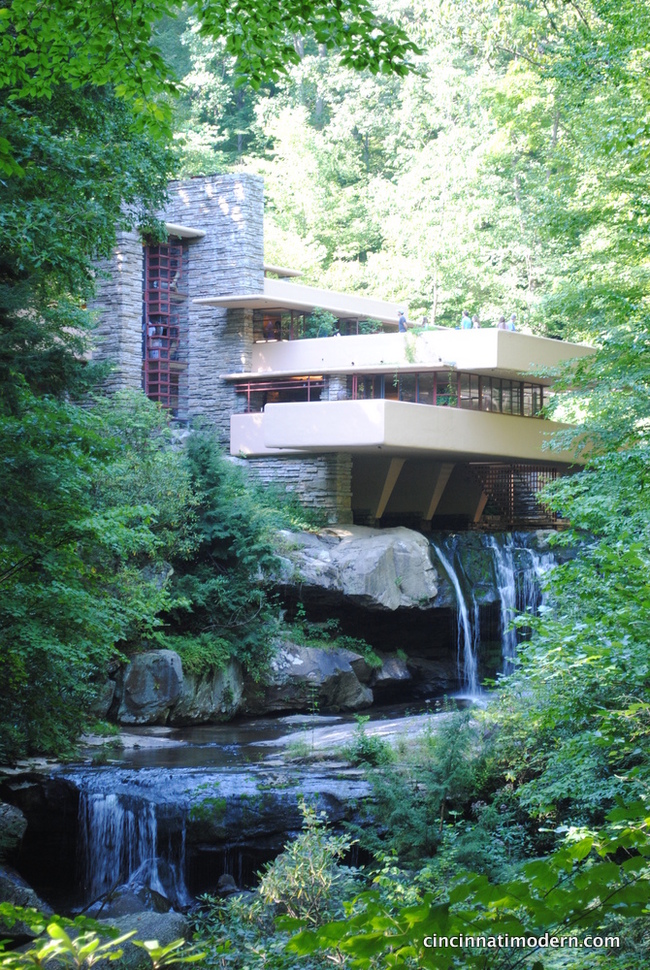 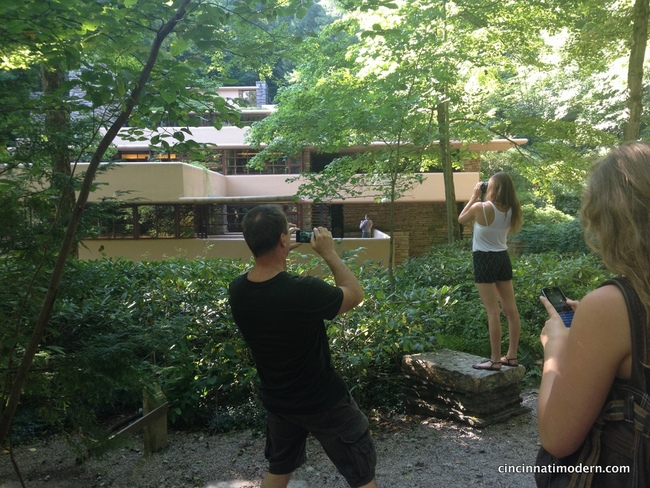 i thought this was pretty funny. i am taking the photo of kirsten, arlen and tenley taking photos. 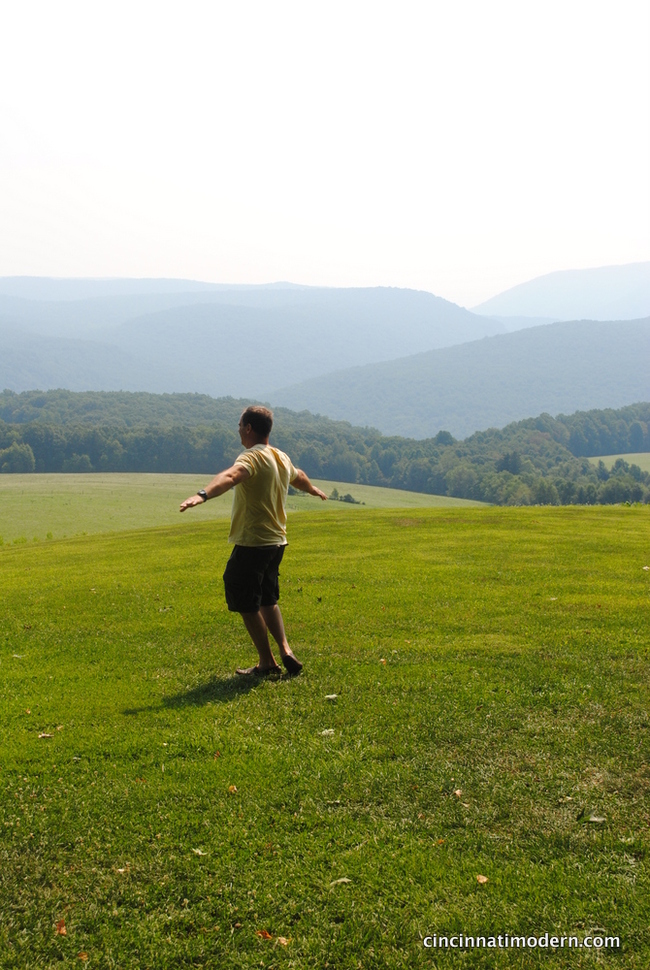 another funny moment – at the top of the hill, just steps from the wooded area around kentuck knob is this gorgeous, grassy hill. arlen just couldn’t resist paying a little homage to julie andrews 🙂 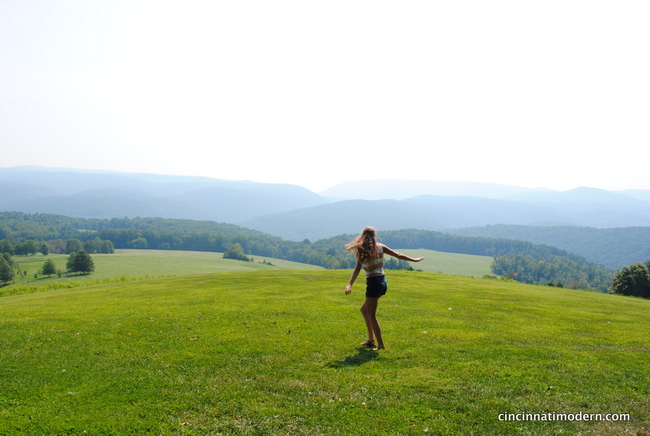 the hills are alive!