once, twice, SOLD to the highest bidder! 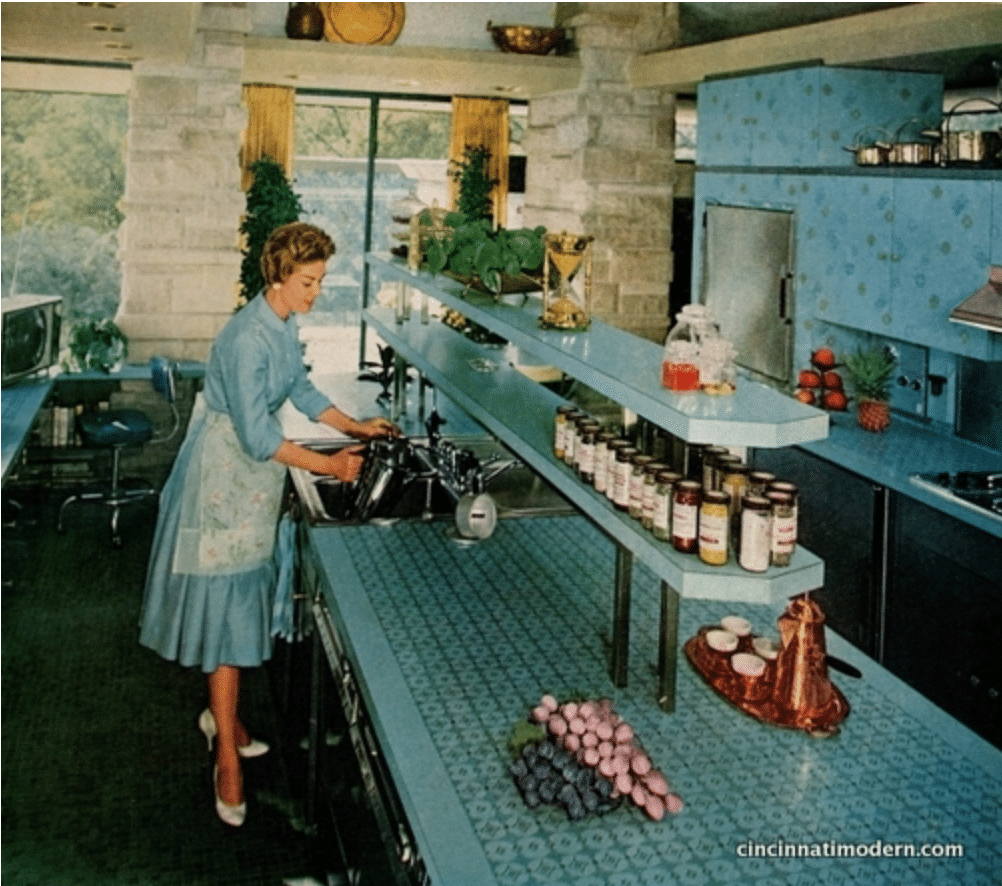 This is it, folks.  A unique opportunity for someone who truly appreciates vintage style.  The complete ‘state of the art 1960’ Nutone-Formica kitchen from the Corbett House in Cincinnati is up for auction on EBTH. It’s what I like to call the “boxer shorts” kitchen because the custom formica pattern reminds me of some jammies that my dad had back in the 60’s. Chuck Lohre of Cincinnati Form Follows Function (cf3) salvaged the kitchen (after the house changed hands for the first time in 2009) and is making it available to whoever can use it. Would be fabulous for a loft space or a new build!  It would be wonderful if this midcentury modern time capsule could stay here in Cincinnati – the home of both Nutone (the Corbett’s company) and Formica.  For more information on the Corbett house, check out our blog post from 2009 when the house was on the market.

This from Chuck Lohre:

“Everything But The House” will auction the famous Corbett House kitchen June 17, 2012. You can preview the kitchen at their St. Bernard location, 5152 Kieley Place, Cincinnati OH 45217 starting June 16, 2012, bidding starts June 13, 2012. Phone: 513-297-1880, Email: [email protected] Learn more at  Everything But The House . All proceeds will be donated to the Architectural Foundation of Cincinnati.

In 2010 we salvaged the entire Corbett House kitchen for a planned LEED home project. It was designed by John deKoven Hill. The 2501 Grandin Road home was House Beautiful’s 1960 Pace Setter and is considered the culmination of Frank Lloyd Wright and John deKoven Hill’s collaborative designs. We aren’t going forward with that project so we are offering the kitchen for auction to benefit the Architectural Foundation of Cincinnati.

RETRORENOVATION article, “Saving the 1960 all Formica kitchen from the Corbett House.”

The entire kitchen by John deKoven Hill was saved except for a refrigerator and two dishwashers that were not original. All of the advanced NuTone appliances are included. Image is from am advertisement in the Feb. 1960 issue of HOUSE BEAUTIFUL.

The Corbett Residence is the 1960 HOUSE BEAUTIFUL “Pace Setter” home designed by John deKoven Hill of Taliesin. The house was actually designed in 1958-59, the year of Frank Lloyd Wright’s death, and it cost millions of dollars at that time. Mr. Corbett (1896-1989) was the president of Nutone Corporation, the maker of exhaust fans, door bells, and chimes, intercoms, and many other devices; as such, he was one of HOUSE BEAUTIFUL’s major advertisers. Three issues in 1960 (February, March and April) were devoted to the Corbett Home as a way of thanking contractors, subcontractors, manufacturers, and numerous suppliers who had contributed generously to this “Pace Setter” house project. Consequently, this may be one of the best documented homes of the 20th Century with a lengthy list of materials and contributors listed in the back of each issue.

← a quick and easy fix what's in a floor plan? (aka: learning to LOVE a split level) →