one small step for man, one giant leap for cincinnati 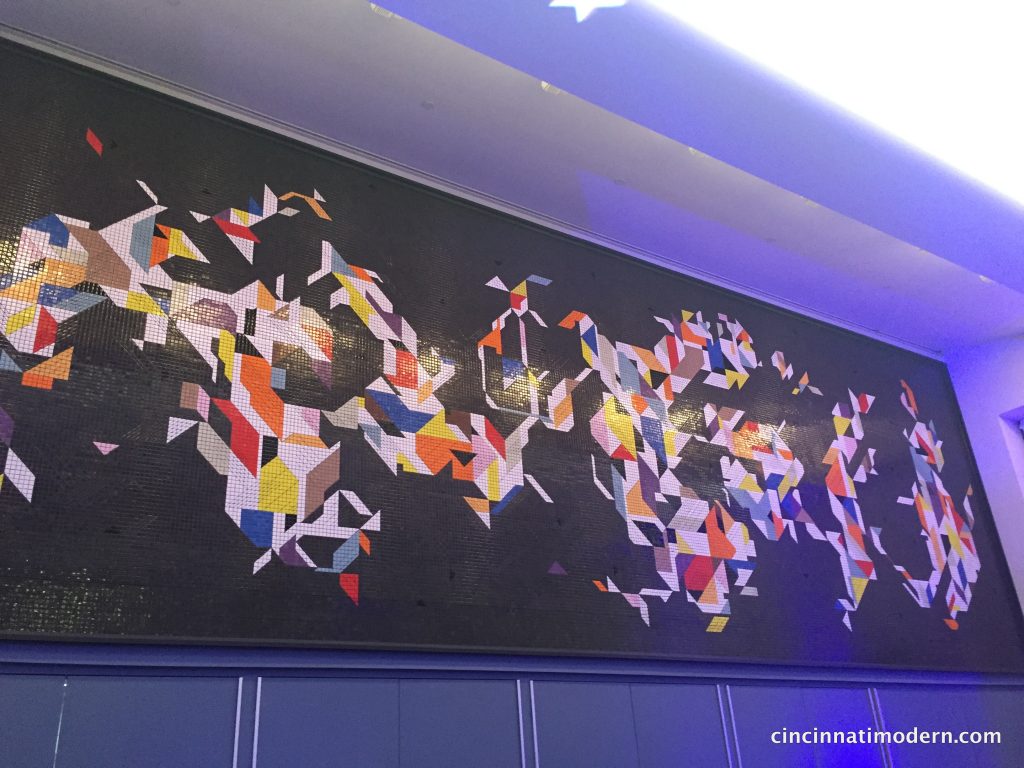 the newly uncovered Charley Harper’s Space Walk. click on image above for an awesome video of the restoration shown at the november 10, 2015 unveiling ceremony at the Duke Energy Center.

As Cincinnati Real Estate ambassadors (both named by the mayor and self proclaimed), Arlen and I have reveled in the great strides our city has taken in recent years in reclaiming our largest historic neighborhood, our riverfront, and just last week, our public art.  This latest step has put us over the moon with excitement!  And since this momentous occasion was largely snubbed by the local media who it seems would rather cover the bad or controversial news, we wanted to bring this great story to you.

As Mayor John Cranley put it at last week’s unveiling, “we all made fashion mistakes in the ’80’s,” and 2 very large commissioned works by well known Cincinnati artist Charley Harper were entombed behind drywall at the Cincinnati Convention Center (later Duke Energy Center) in 1987.  No doubt the black and vibrant primary colored ceramic mosaic work clashed with the teal and peach color scheme of the day.  Cincinnati, we have a problem!

The mural in two sections, each measuring 15 ft high and 30 ft wide, was Harper’s interpretation of the first space walk by Ohio native Neil Armstrong.  They were installed in 1970 in the then new east lobby, over the entry doors to the main exhibit hall.  According to Brett Harper, they are his dad’s only non representational works besides some of his student pieces from his days at the Art Academy of Cincinnati.  Harper’s posthumous trajectory in fame was catapulted into the stratosphere first after Todd Oldham’s book, Charley Harper, An Illustrated Life was published in 2007, and most recently with Jason Schwartzman’s incredible interpretation of his work in LumenoCity 2014.  Now, finally, after 10 years of grass roots efforts by Brett Harper, cf3, Duke Energy Convention Center General Manager Ric Booth, Oldham, Chris Seelbach, Artworks, and the people of Cinicnnati, the time was right and the money was available to correct this backward step.

We were fortunate enough to be invited to the unveiling and to meet the wonderful fellow ‘Harper-ite,’ well known graphic, industrial and fashion designer, Todd Oldham and his partner Tony Longoria.  We had a lovely conversation about the man we all knew and loved.  When the curtains came down and the works were revealed, there was barely a dry eye in the house.  Moments like this make me not only proud to be a Cincinnatian, but so grateful that we live in a city that not only appreciates, but has learned to embrace its public art.

Can’t help but look up at these celestial works and wonder not only what Charley was thinking when he designed them, but if he is looking down on us now, with his trademark smile and larger than life sense of humor. 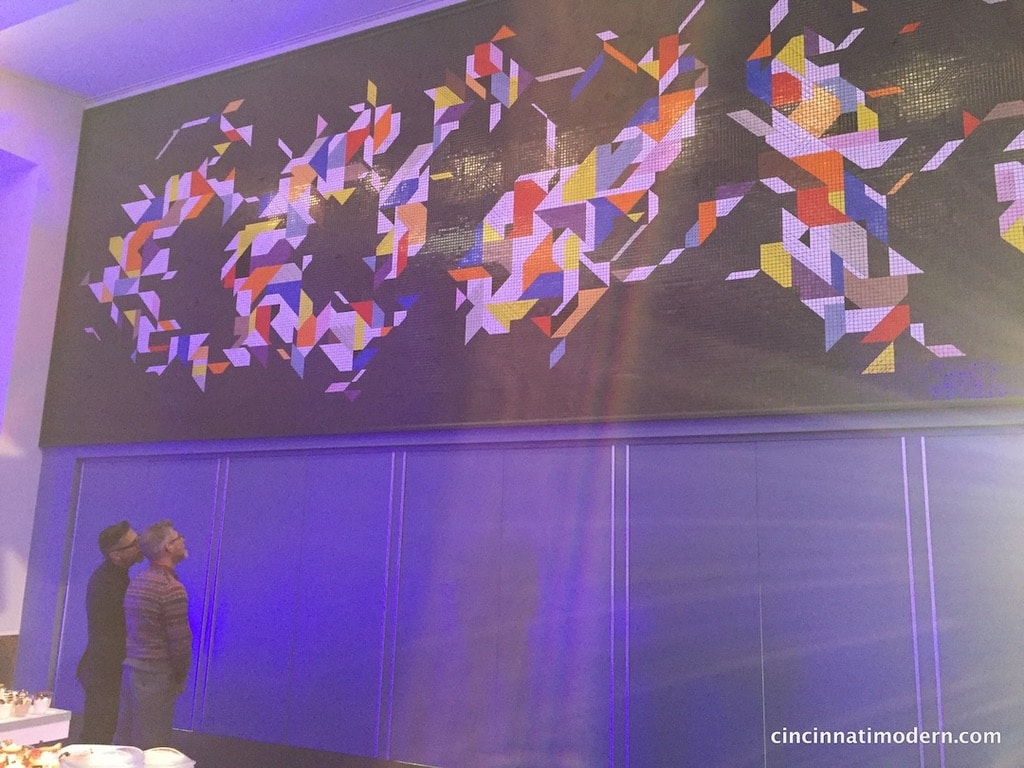 click on photo above for short video of the unveiling. Here, Tony Longoria and Todd Oldham seeing the mural in person for the first time right after the curtains came down. 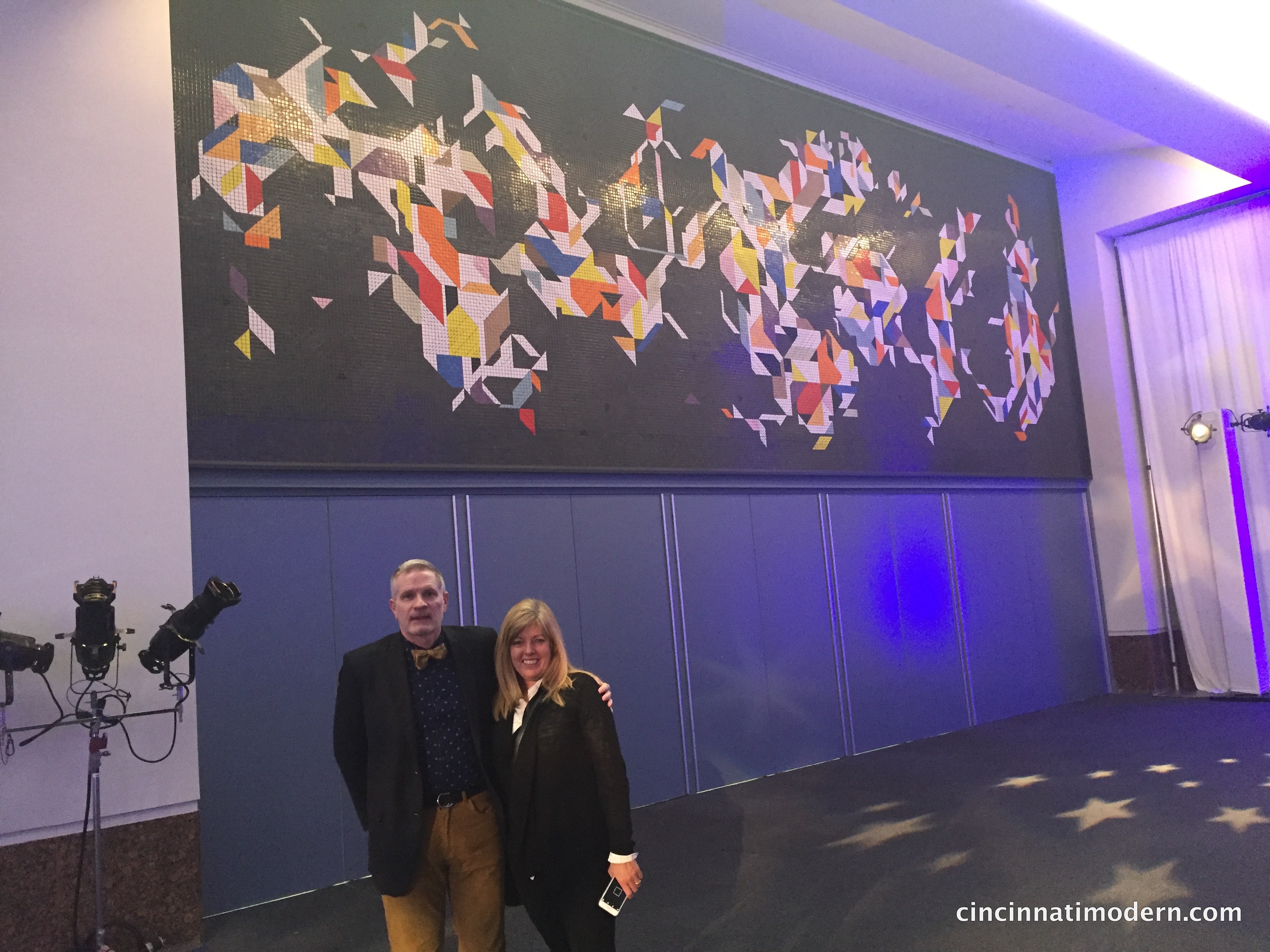 me and my friend David Smith, cf3 liaison to the mural project 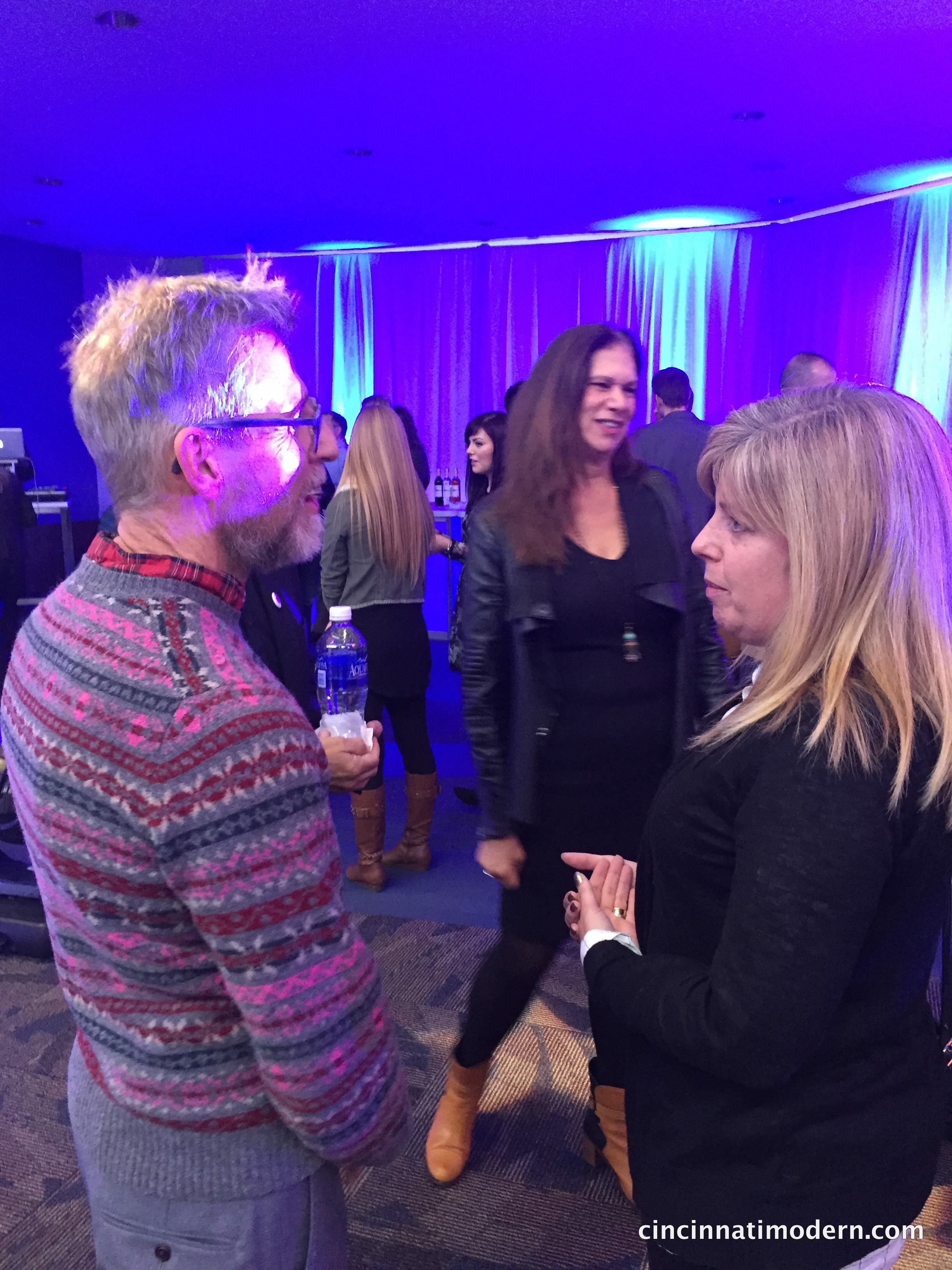 me and my new bestie, Todd Oldham, sharing a love of all things harper 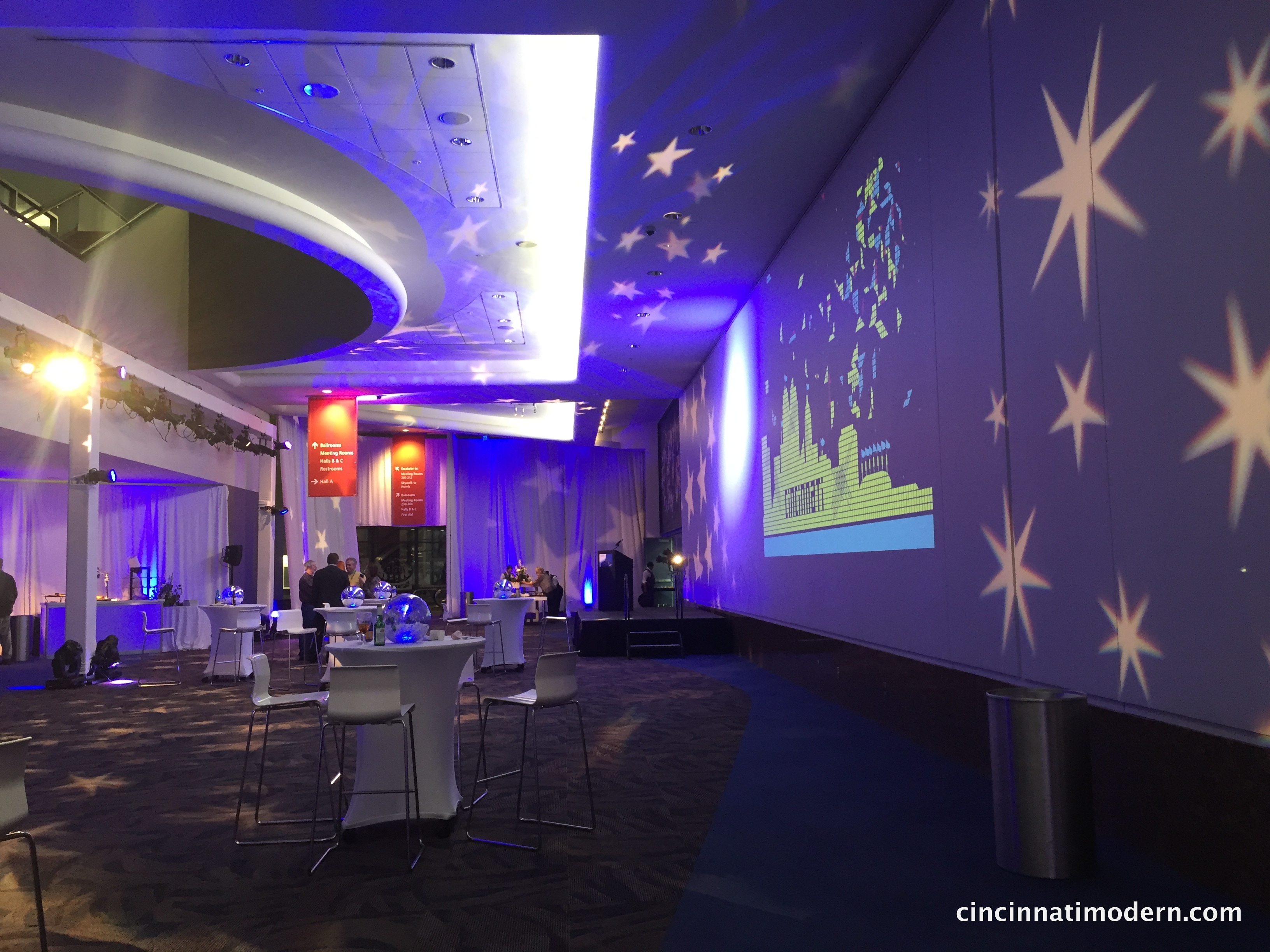 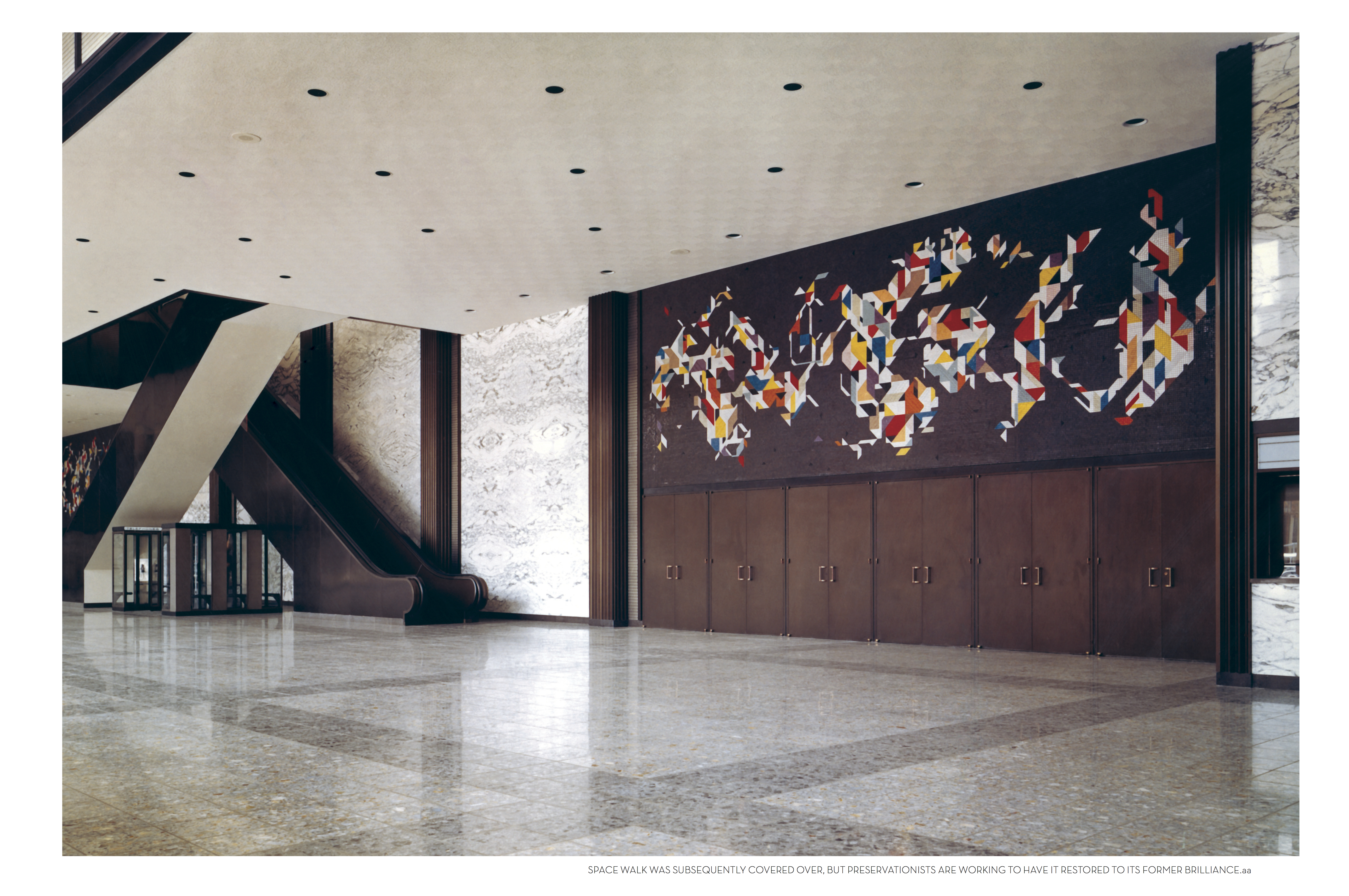 the lobby of the convention center as it appeared in 1970. I think we can all agree that the remodeling that has taken place since has been a backward step!The Space Walk murals are available for the public to see anytime the lobby at the Duke Energy Center is open. There is another ‘public’ Harper mosaic mural in Cincinnati at the John Weld Peck Federal Building on the corner of 5th and Walnut. Just go through heavy security (i/e undergo an almost strip search) and you can walk right in. Photography is no longer allowed in the building for security reasons. Here is a stock image of the breathtaking artwork. Make it an outing and go see both. You won’t be disappointed! 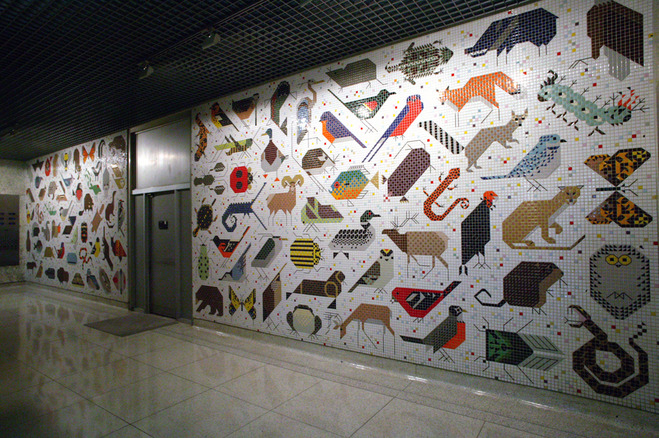 city beat article about the restoration

← work where you live our favorite things - 5th anniversary edition!  →