the following are some posts carried over from Susan’s original blog, started in 2004. 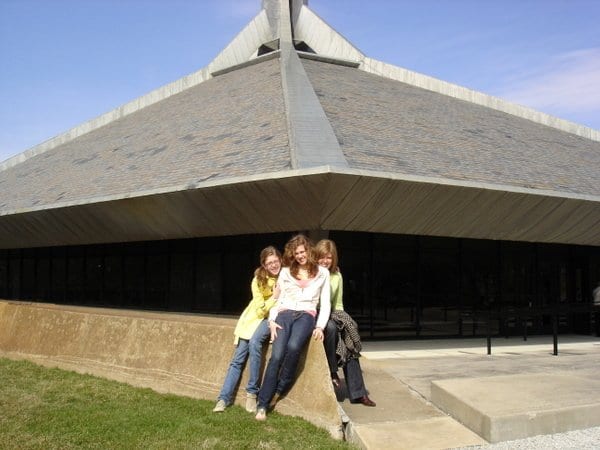 Since a Spring Break beach trip was not in the cards for us this year, we wanted to do a little something for a change of scenery.  So a couple of weeks ago we took a day trip to Columbus, Indiana (72 miles from Cincy).  For those of you who don’t know, tiny Columbus, population 39,000, is a hotbed of modern architecture.  The late Irwin Miller, owner of Irwin Union Bank and Cummins Engine was a huge fan of modern architecture.  To enhance his local built environment, Miller started a foundation back in the 1950’s where local Columbus businesses, churches and government agencies could apply for a grant which would pay the architectural fees of a world renowned designer.

So, in little Columbus, IN, they have a church by Eliel Saarinen, a church by Eero Saarinen, a library by I.M. Pei, schools by Harry Weese and enough cool modern buildings and public works of art to fill a two hour bus tour!  The tour was a lot of fun and at $10 per person, a bargain.  We had great commentary from a local tour guide bursting with pride for her community – and perhaps the best feature, inside tours of the two Saarinen churches.  My husband and I were both awestruck by the Eero church.  It was stunning!

After the tour, we walked through the charming downtown to the Irwin Union Bank building – an absolute time capsule from 1954.  This working bank branch has original desks, Saarinen side chairs, lighting, flooring, everything….  Not only was Irwin Miller a visionary in terms of developing his hometown, he had the incredible restraint to resist ‘updating’ his bank building in the 1970’s and 1980’s.

After our whirlwind tour of the town, we did a little driving around on our own.  Off of the main road just outside of downtown, were these really cool streets with houses built around small man-made lakes.  Lots of modern houses mixed in, but as my 16 year old daughter pointed out, “these people don’t know that they have modern houses.”  Yes, even in a town that treasures its public modern  architecture, people still make horrible missteps with their modern homes – vinyl replacement windows, Lowe’s cut glass doors, and even the occasional yard goose……

The real goal of the trip, to catch a glimpse of the Miller house designed by Eero Saarinen in 1953, went unfulfilled – the location a closely guarded local secret.  But hopefully one day it will be open to the public – and we’ll be back!!

Check it out at www.columbus.in.us/ 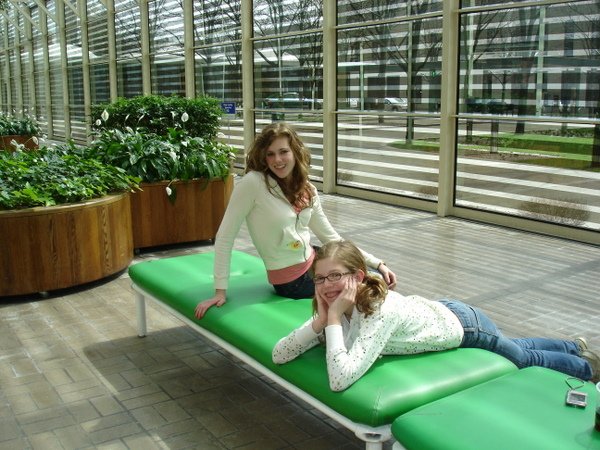 kirsten and tenley in the atrium behind the eero saarinen irwin union bank in columbus, in

There are a lot of perks to living in a modern house.  You get to be on a first name basis with your roofer (Hi, Larry!), your kids’ friends think you live like movie stars, and occasionally you get a knock on the door from a location scout.  Our first knock came about 4 years ago, around the time MCM houses started showing up in everything from allergy pill commercials to Windex ads.

Turns out, there are a lot of ad agencies and publications in Cincy that jumped on the modern bandwagon and use local homes as their backdrops.  It’s 50’s style cool for state of the art products of today.  Go figure!

And today, I did it again.  I pimped my house.  I am sitting downstairs as a photographer, stylist, hair & make-up person and some models are upstairs shooting away.  The fee they pay to use the house (complete with ‘period’ props) goes into my ‘house fund’ for upcoming improvements.  I think a cork floor in the master bedroom is next.

The way I see it, it is a win-win.  Modern houses get exposure and my house gets improved.  I don’t know how long the public’s fixation with MCM will last, but for me it’s just another adventure in the life of a modern homeowner.

People keep asking me, what is going on in the market?  Where are the Spring listings?  In our office, we are noticing pretty good activity in the market.  Lots of showings, offers going back and forth, the usual.  But something is missing.  The new listings!  I had more activity in January with new listings than I am seeing now.  I have buyers who would pounce on the right house if it came on the market.  But I think would-be sellers are listening to all of the negative press the real estate market in general is getting and deciding to wait to put their houses up for sale.

The MODERN market has always kind of been its own thing.  These are very specific homes for very specific buyers.  People who buy modern homes are not going to settle for just anything.  We just need more choices out there!  If a house is priced right, it will sell quickly.  No, we’re not getting the crazy escalating prices that we were seeing a couple of years ago.  But Cincinnati has always had a relatively good housing market.  As a matter of fact,

Money Magazine released a list of the 6 “best places to buy a home these days.”  The website reports that the list is of “The 6 cities where home prices are likely to rise the most – or fall the least – in the next 12 months.”

Money reports that: “The city’s manufacturing-heavy economy should benefit from the falling dollar. Commercial building is up, and high-end developments are moving in.”

“It is great news considering the national trends.  The ranking confirms the strength of our housing market.  The Cincinnati Area remains a great place to buy a home, which is one of the reasons why we are so attractive for business investment,” Mayor Mark Mallory said.

As we emerge from our cocoons – from a far too long winter, if you ask me, it’s time to think about how to get out and enjoy our great city, modern style.  Last Saturday morning, I took the family down to Findlay Market for our favorite breakfast.  It wasn’t exactly warm yet, but it felt good to be at the market, especially for some of the best food in town!  The breakfast bowl from Aunt Flora’s is fantastic (smashed potatoes, egg, cheese and bacon….), especially with a side of Belgian waffle from Jean-Francois (www.tastefrombelgium.com ).  Words cannot describe these waffles – like nothing you have ever eaten before.  Trust me – just go down to the market and get one (or two)!

After loading up on our market staples (Krause’s roast beef, Eckerlin’s pepper goetta), we headed over to Country Club gallery to see the Charley Harper exhibit.  For those who haven’t been, Country Club is in the same building as the Carl Solway Gallery, also on Findlay street, but west of the market in the West End.  We were all completely speechless at the beauty of the works, and believe me, it’s not like any Harper exhibit you have seen before.

These are the original drawings from the Golden Book of Biology and The Animal Kingdom books, illustrated by Harper in the early 1960’s for the Golden Press.  And they are all for sale!  OK, the prices are kind of steep – most in the $2000 – $6000 range – they are a treat to look at nonetheless.  Many have the original crop marks and printer notations. It really makes you wonder about the investment value of these rare original Harper pieces.  I have a feeling that in actually, the prices really aren’t so steep…..

And while you are there oogling over the works, don’t forget to go in the back room and see the video of Todd Oldham, fellow Harper groupie, talking about his friend Charlie on an episode of CBS Sunday Morning.

The last stop on our ‘downtown tour’ was Park + Vine, Cincinnati’s very own green general store, to check out the cf3 modern architecture exhibit.  Yes, I’ve seen the exhibit before – having worked on it with Chris Magee and Mike Keifling – but I wanted to see how they had it displayed in the store.  I also wanted to check out the store since I hadn’t been before.  The exhibit looked great, prominently displayed along a wall – easy to read and see the photos.  The guy behind the counter even said that Ben Dombar’s family had been down to check it out and take pictures of it the week before.  Very cool!

Of course, while at Park + Vine we  had to do a little shopping – an aluminum water bottle, recycled motherboard keychain, bamboo spoon.  I resisted the urge to buy the “Florence Y’all” t-shirt with a vintage “Carol Brady” photo on it.  AND, we were home in time for my teen agers to go off and do things with their friends.  Ya gotta love Cincinnati!

I love this time of year – I can indulge in my two favorite guilty pleasures without feeling, well, guilty.  #1 is harmless enough – my Vince Guaraldi “Charlie Brown’s Christmas” soundtrack is on permanent loop in my car’s CD player.  I especially like the re-mastered version that came out last year with 4 previously unreleased alternate tracks included.

My other guilty pleasure is Frank Capra’s 1946 classic movie, “It’s a Wonderful Life,” which I watch on Anniversary edition dvd until it finally plays on TV (which, of course, I can’t miss, even though I have it on dvd).  But this guilty pleasure makes me think each and every time I see it.  Usually I think about George Bailey, and how his seemingly ordinary life has influenced the lives of so many others.  Sometimes I feel like George when I am able to match the right buyer to the right house…….and how that simple act changes the future of the buyer and the house.

But lately I have been thinking about Old Man Potter.  When there was a run on the bank, people were panicking and selling their shares of the building and loan for 50 cents on the dollar.  But Potter wasn’t selling, he was buying.  He knew the setback was temporary and he knew a good deal when he saw it.

When I see the incredible deals on houses these days, I feel like buyers need to be a little more like Potter.  OK, maybe not evil like Potter.  But it really is a buyer’s market and if you are in the enviable position to be able to buy without selling, then this is your season!

welcome to the NEW cincinnatimodern.com →