the artistry of richard t. calef 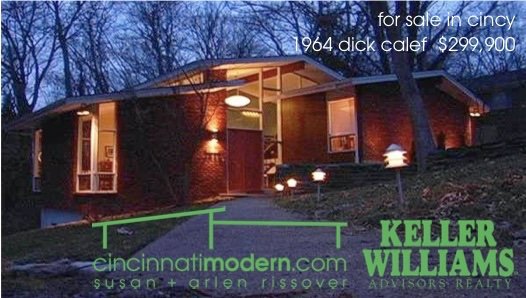 Many cities with large tract developments of MCM homes have a few different floor plans and elevations repeated throughout the neighborhoods.  Not in Cincy!  With the exception of the Pease kit homes (the George Nelson Shorewood and other modern ranches), just about every Midcentury Modern home I have seen in Cincinnati is as unique as the original owner who commissioned it and the architect who designed it.  Some were even done by early ‘design build’ firms that did both the design and construction.  Richard T. (Dick) Calef was one of a few talented artists/entrepreneurs who did just that.

Like many others of his day, Dick Calef’s education at the University of Cincinnati’s architecture school was disrupted by WWII.  He flew many combat missions before eventually returning to Cincinnati and opting to design and build instead of returning to school.  He used his trademark used red brick on most of his buildings (with the notable exception of the Rosen house in Amberley, sheathed in lava rock!) and he had a reputation for building a very cool and very well constructed modern house at a very reasonable price.  Maybe too reasonable – he built for only about 10 years, mostly in the Mt. Washington, Anderson and Turpin area before leaving town.

“He didn’t charge a design fee, even.  Dick was a terrible business person, but a very talented designer and a fabulously wonderful person,” local gallery owner Carl Solway once told me.  Carl actually lived in a house designed and built by Calef in the early 1960’s.  Legend has it Calef moved to Texas when he left Cincinnati in the late 1960’s, but the trail ends here.  I would love to find out more information about him and of course my ultimate wish would be to have a complete list of his projects.  But for now, all we can do is ‘discover’ them, one at a time.

Below are photos of 3 Calef homes that I have had the pleasure of representing.  The first one, in Turpin Hills, is currently on the market!  I’ve been told that Dick’s own house was on Eight Mile.  If you know of this house or any others he designed, please let us know! 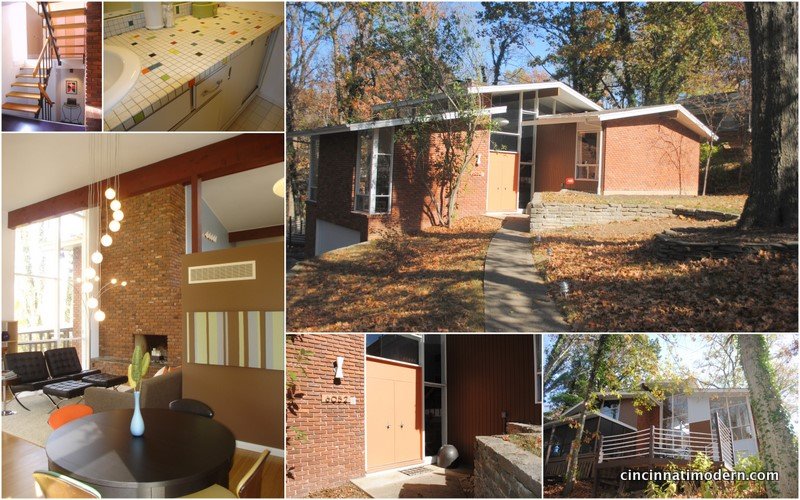 ‘the blum house.’ the only dick calef home currently on the market. his artistry really shines on this one! 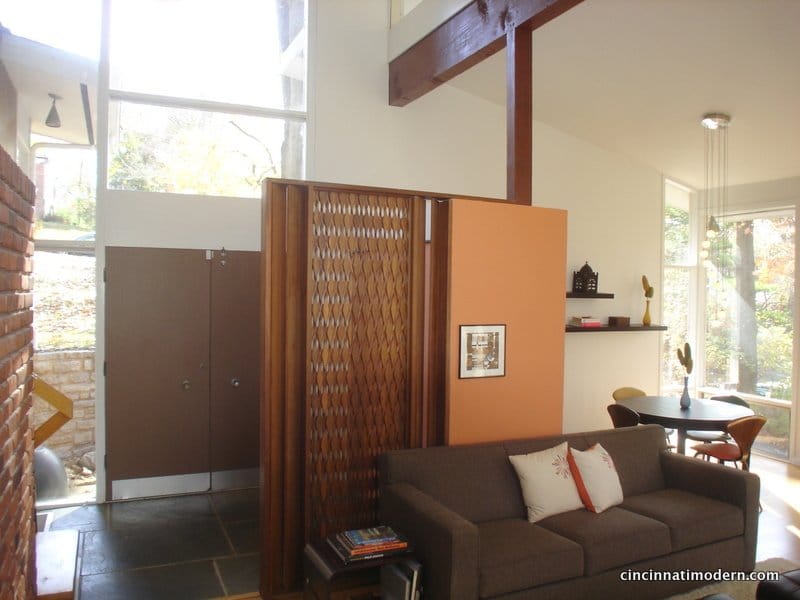 ‘the blum house.’ check out this unique carved walnut screen original to the house. some of the best modern bling i have seen!’ 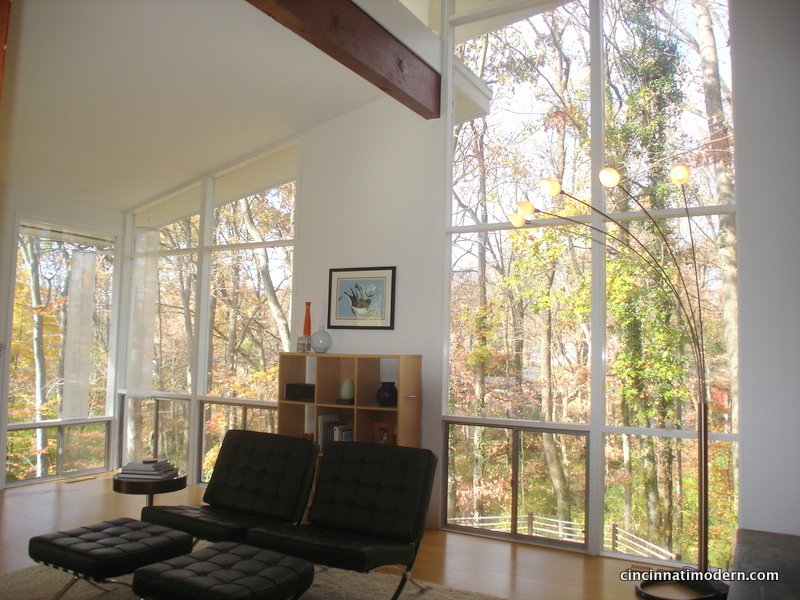 the blum house’ living room overlooking woods and ravine. this house is in turpin hills, one of the best ‘pockets’ of mcm in all of cincinnati!’ 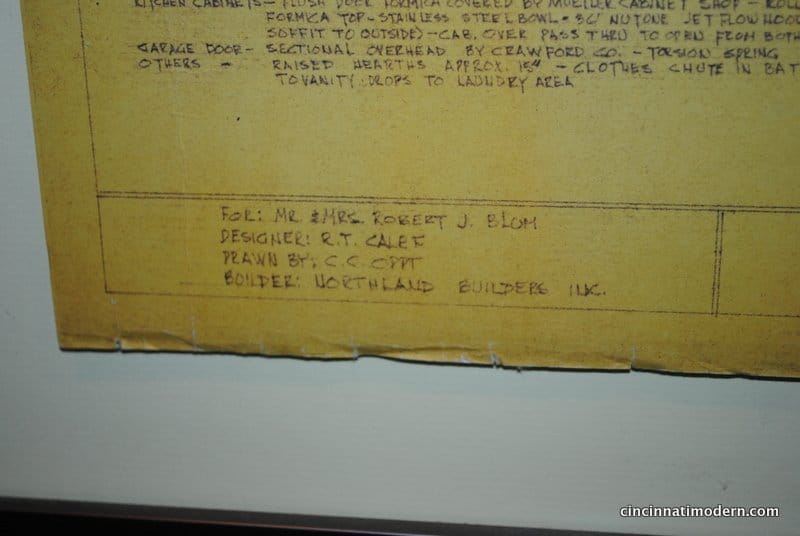 the blum house’ original plans and drawings have been preserved and are included in the sale. 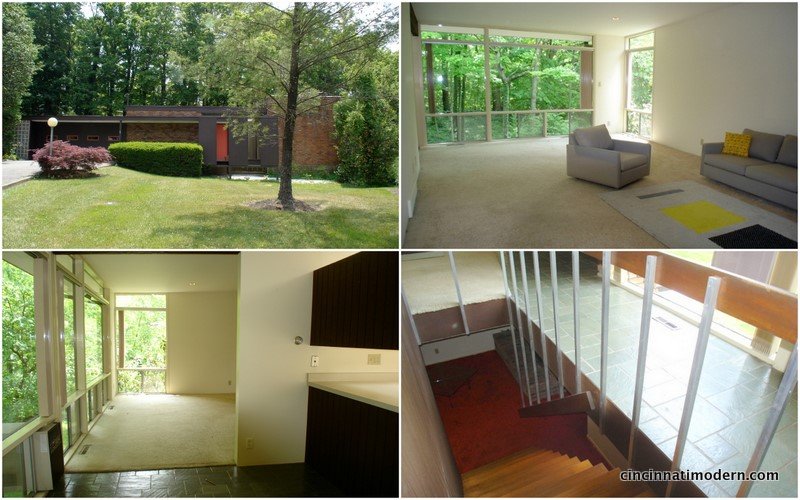 ‘the perritt house’ in anderson twp. this one sold in ’07 to a sympathetic buyer who I’ve heard is keeping it true!’ 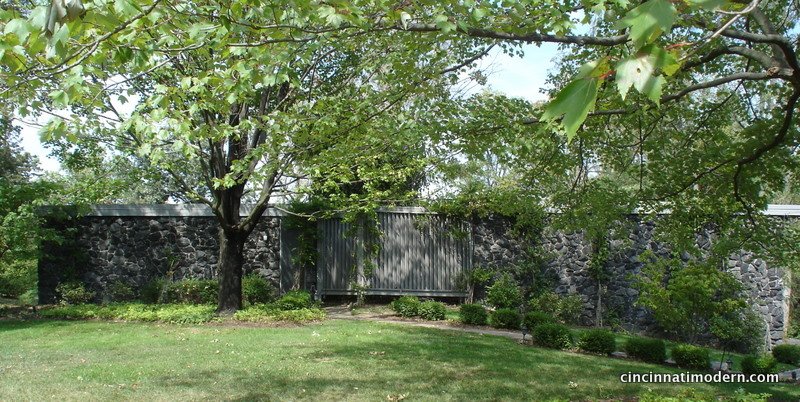 the rosen house’ in amberley village. this photo and the next were taken in ’08 before its most recent sale. a former owner destroyed much of the homes interior integrity and subsequent owners have been working to bring it back. the most current owner has removed all of the lava rock on the facade since this photo was taken 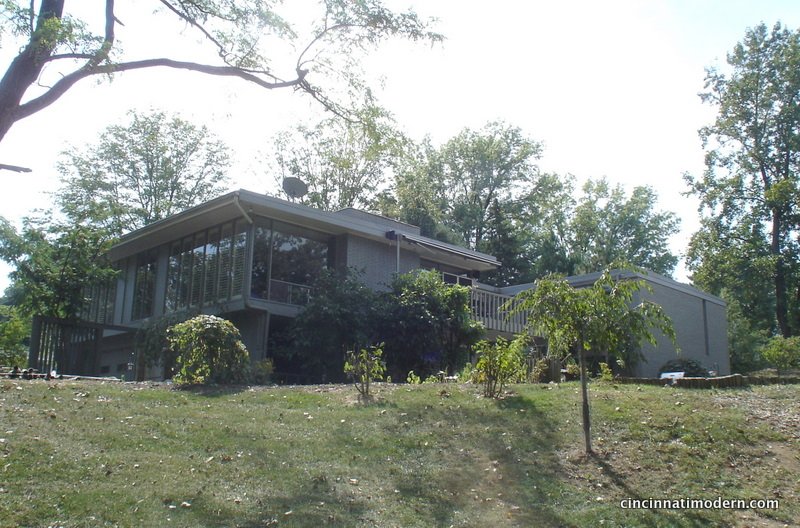 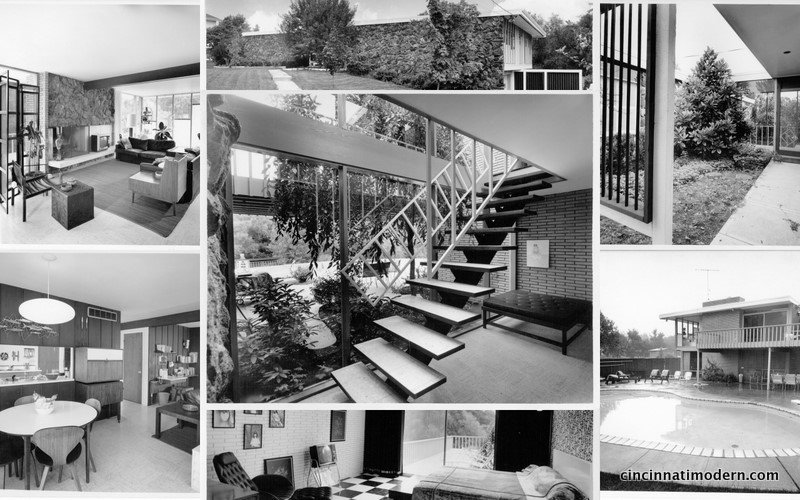 ‘the rosen house’ in its original interior state, photos circa 1968 courtesy of former owner betty wayne. for many reasons, this is one of my all time favorite mcm’s!

Dick and Karen Calef built their home on Wolfangle Road in Anderson Township and we lived across the street from them – our address was 1428. We became very close social friends and when we were ready to build a new home, Dick designed and built it for us on Lanette Drive in the Hitching Post subdivision. Unlike his award winning designs, our preference was colonial. We lived in that home from 1962 to 1971 when we sold it to Paul and Rita Sumner.

Dick’s Austrian born wife, Karen, died suddenly in 1962 at the age of 35. Some years later Dick married the former Jeanne Gerwe and later moved to Houston, TX with Jeanne and his mother, Winnie (Winifred) Calef. Jeanne died in Houston and Dick cared for his mother until she died when she was over 100 years old. We had moved to St. Louis, MO and after 20 years retired to Tryon, NC. Dick visited us in the late 1990’s in Tryon and after that we eventually lost touch with him.

I do not believe Dick resumed home designing or building after he left Cincinnati. In Houston, he was doing design work for an engineering firm but I don’t believe it was residential related.

I hope the foregoing provides some of the information you seek. He was certainly a very pleasant and talented man. I am assuming you are aware of the Beautiful Homes and Gardens feature that was done on him

Since this was written back in 2011, we have  sold other Calef treasures including Dick’s own house on Wolfangle (see photos below). 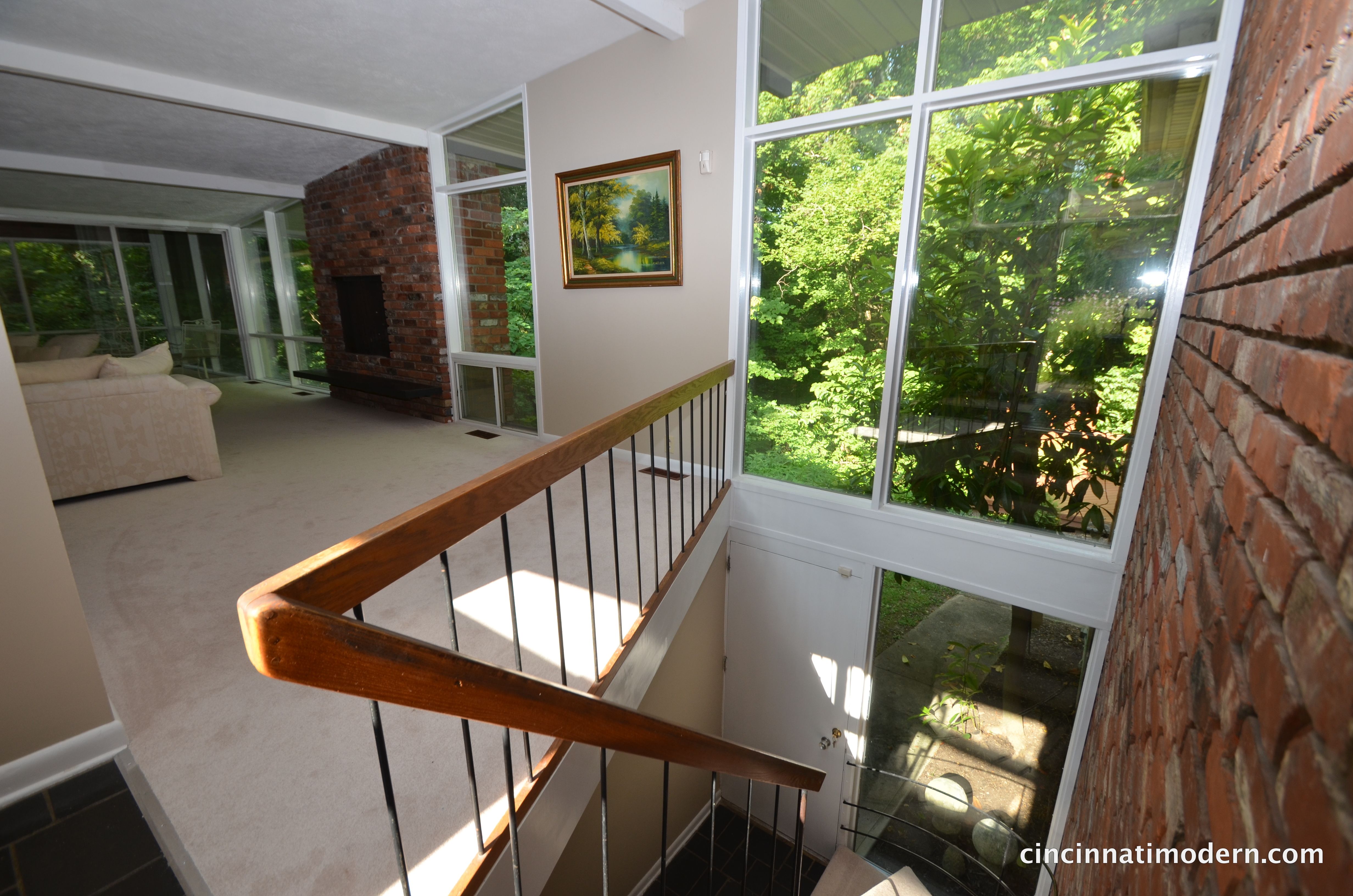 Dick Calef’s own house in Anderson Township, sold in 2014. 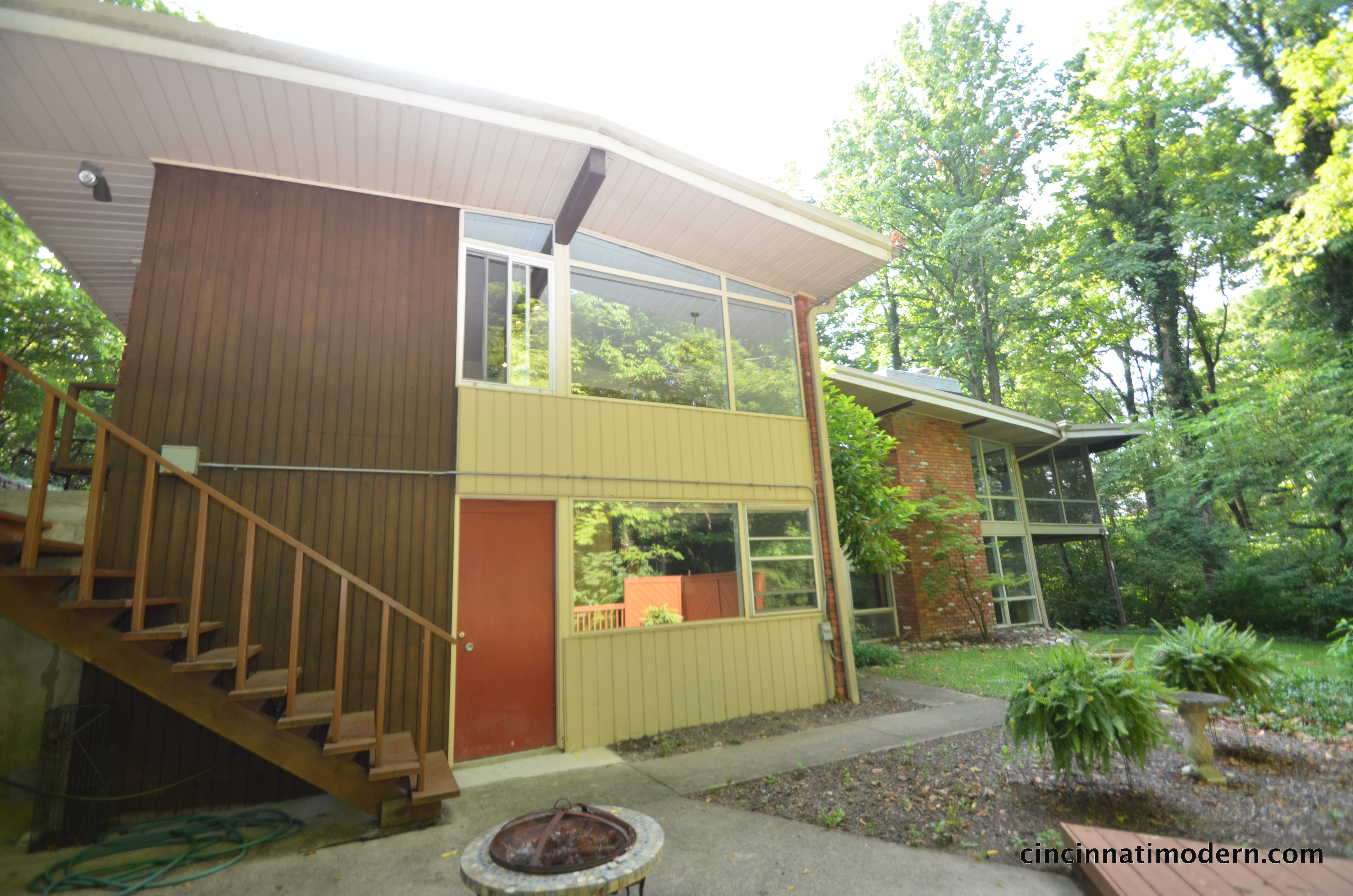 Dick Calef’s own house in Anderson Township, sold in 2014