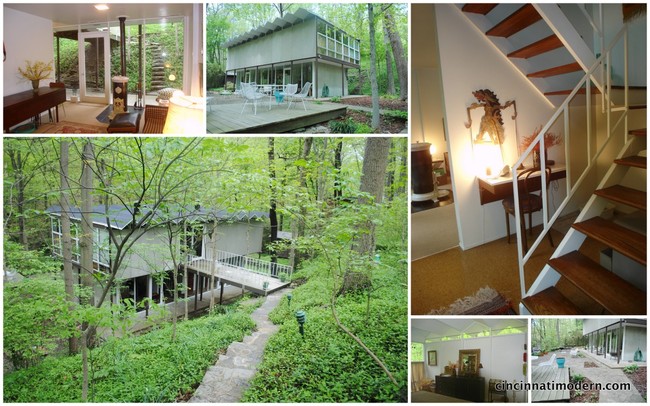 The Ruth House by architect Ray Roush, currently on the market for the unbelievable price of $129,900

Once upon a time, in the early 1950’s, a group of ‘urburban’ pioneers, adventurous by nature, seized the opportunity to build their dream homes on a beautiful piece of land.  Their first challenge was to get public water lines to the site.  Their second challenge was to engineer their modest modern homes for some of the most difficult terrain in town (while taking advantage of the gorgeous wooded creek setting).  The third and most arduous challenge was to fight ‘the man’ over the construction of the Cross County (later Ronald Reagan) Highway.

The pioneers were people like us –  architects, designers, university professors, business owners and…..people who knew that cookie cutter post war houses were NOT for them.  They either designed their own homes (in the cases of architects Robert Dayton, Richard Peacock and Ben Dombar), or hired modern architects to do it for them (Ben Dombar [x5], Tweedell and Wheeler, Ray Roush, Rudy Hermes and Dick Lakeman).  These hearty souls hauled stone up from the bed of the beautiful Congress Run creek to build stairways, patios and in one case, even a bathtub!  They were on limited budgets, but that did not stop them from building their dream homes.  They pitched in on the building process wherever they could – in one instance even putting their own tar and gravel roof on to save money. 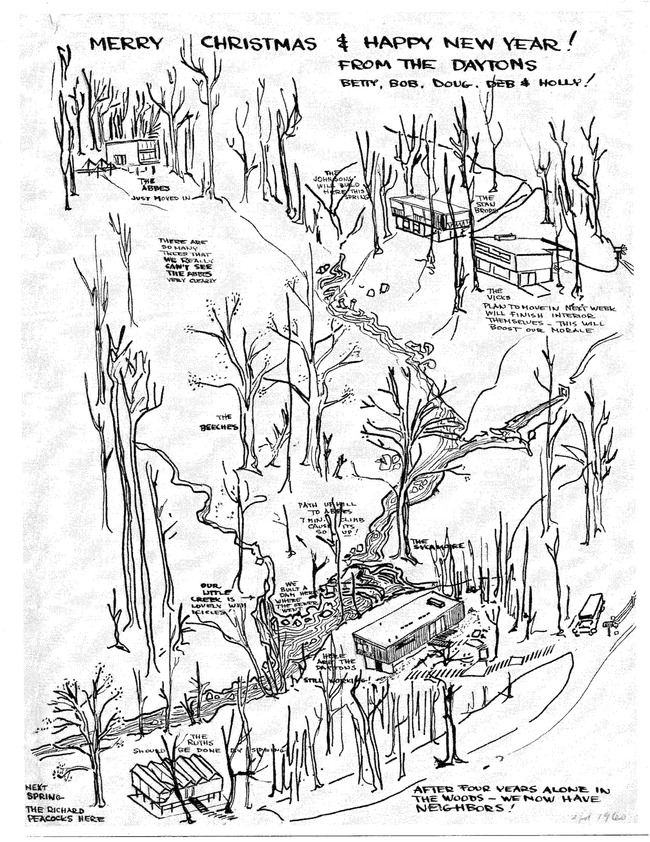 1960 Christmas card by Betty Dayton Cautley. The Ruth house was under construction at this time. Notice the Abbe house pirctured here (photo below) and the two other houses to the right, whidh were destroyed as the Cross County (now Ronald Reagan) Highway cut a swath right through Finneytown.

Imagine this today – an opportunity to build your dream home on an idyllic (albeit challenging) piece of land and only 15 minutes from downtown.  Would you have the fortitude to do it?

50 + years later, the fate of these homes has been mixed.  A couple are still in the hands of the original owners.  Some have been sold, but lovingly cared for through the years.  Others have not been so lucky as multiple owners, modifications and foreclosures have left them in near ruins.  Luckily, two of the homes that went into foreclosure in the last year have been purchased by end users who are renovating them to their former glory.

Two of the homes are currently on the market – one is a tiny 1-2 bed MCM.  The other, the Ruth House, is being sold for the first time.  Kathleen Ruth was involved in every step of the design process of her dream home with architect Ray Roush.  The collaboration resulted in a spectacular zig-zagged roof glass box nestled on a promontory 32 steps below the street level, but high above the creek.  It looks every bit as fresh – and futuristic – today as it must have when it was built 50 years ago.  It has been meticulously maintained through the years and although Kathleen admits it is modest in size (@ 1500 sq. ft) compared to today’s homes, she raised 3 kids in the house and credits the steps with keeping her young and active well into her ninth decade!  Fortitude indeed!

This modern enclave is located along West Galbraith Road just east of the Galbraith/Winton exit off of the RR Highway and at the base of Wyoming’s Congress Run Road.  In all, 13 modern houses that were built mostly between the early 50’s and late 60’s are still standing. At least 3 more MCM homes that were built were destroyed to make way for the highway exit ramp.  Some are in Wyoming, and some are in the Finneytown area of Springfield Township.  All come with the challenges of steep lots and being on a busy road.  No, you can’t walk to a coffee shop.  But the view out the back door, onto the creek and woods, is priceless.  A little slice of nirvana, just off the highway – could it be your happily ever after?

Special thanks to UC professor Patrick Snadon and his students for sharing their research of the “Modernist Homes in the Ravine,” and to Kathleen + Randy Ruth for their historical perspective.  Thanks also to Betty Dayton Cautley for sharing her fabulous Christmas cards! 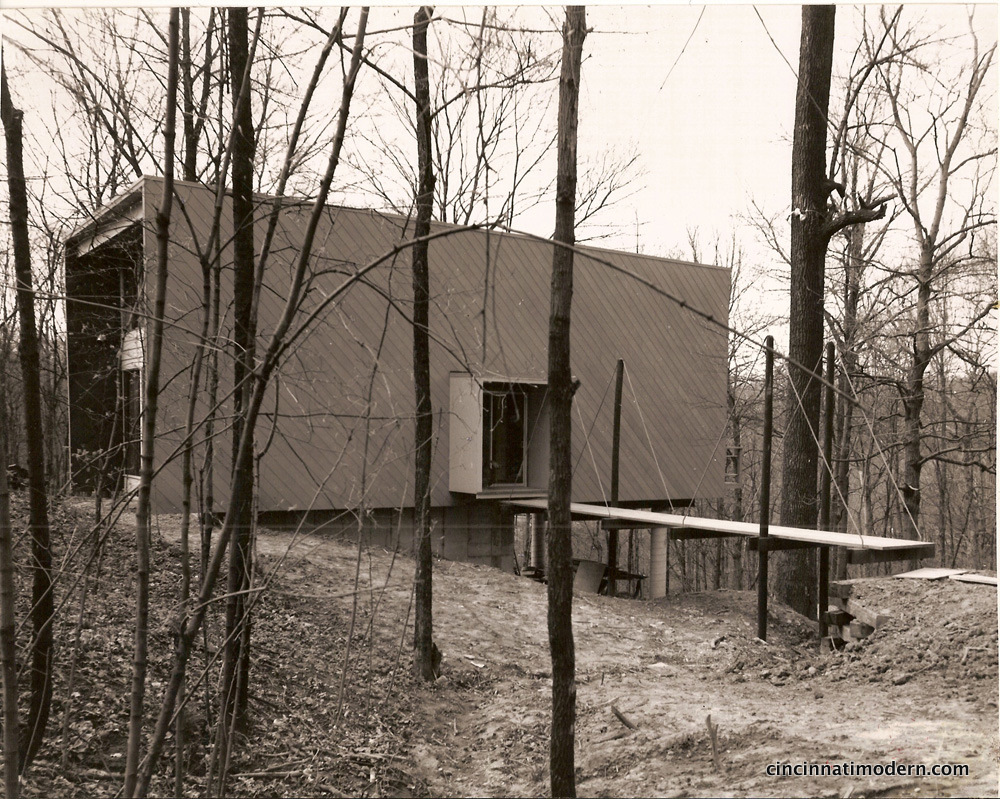 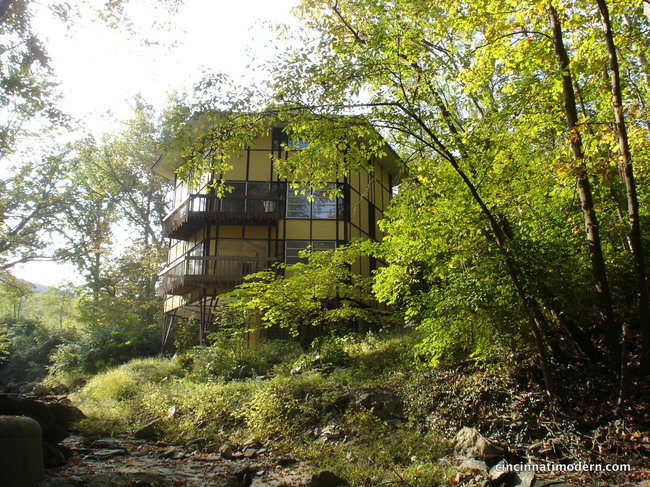 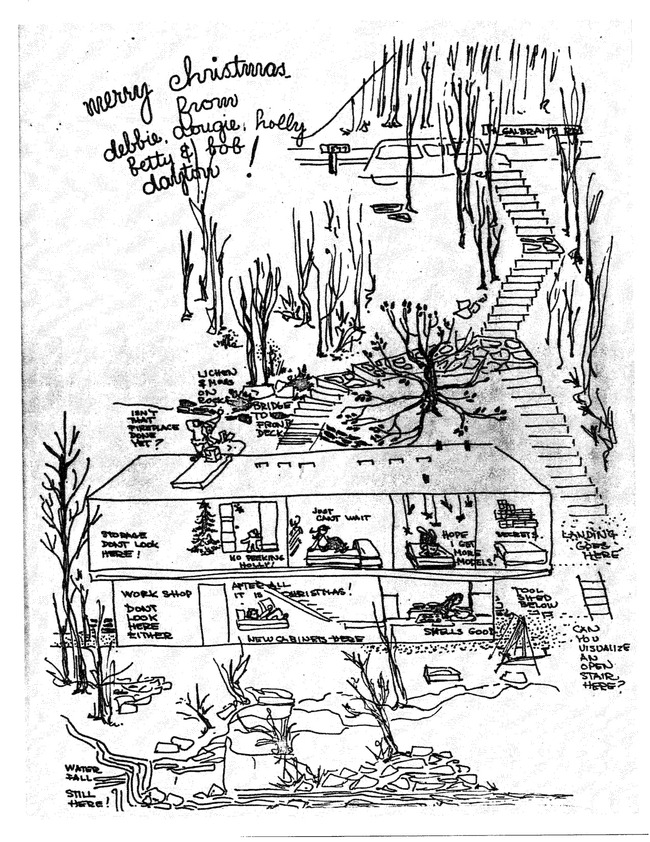 Another Betty Dayton Cautley Christmas card. And yes, the waterfall is still there! 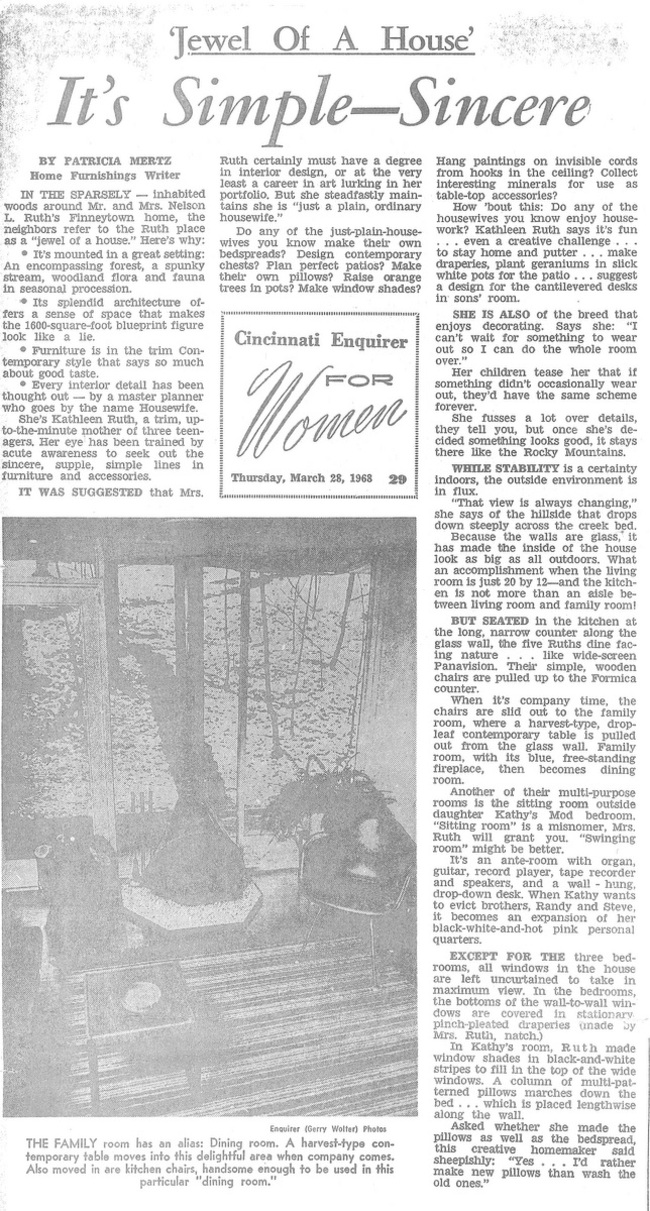 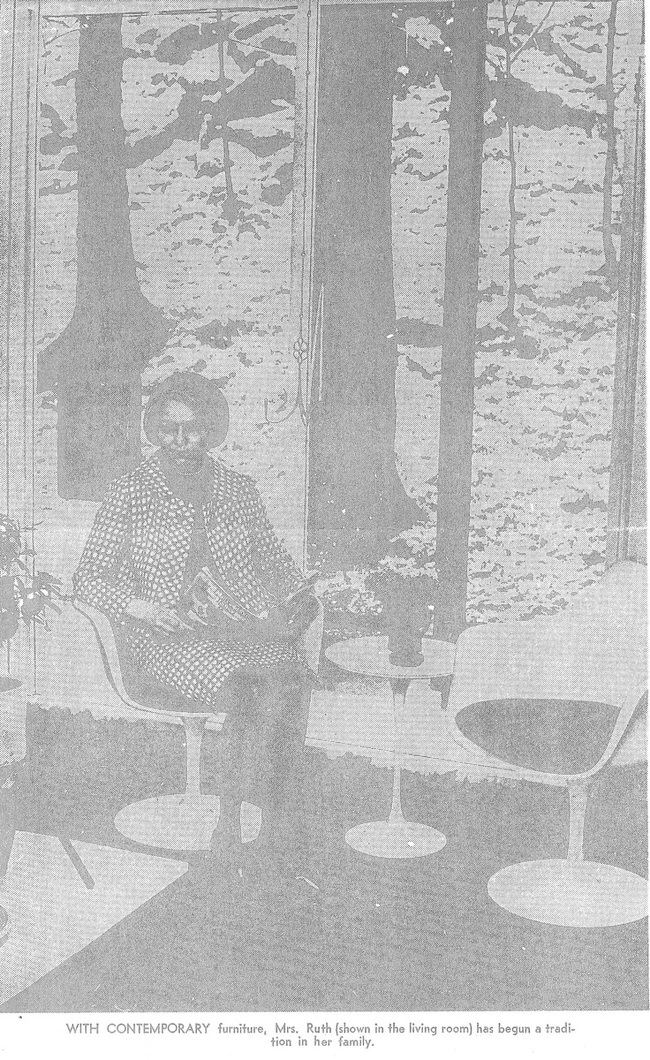 The Ruth house, by Ray Roush, which is currently on the market, looks every bit a good today as it does in this Cincinnati Enquirer article circa 1968. My family had to laugh when they read the article because the description of Kathleen sounds so much like me 🙂

The Ruth House sold shortly after this article was published in 2011.  One of the Richard Lakeman designs is currently on the market.